Hello, World. Sorry, I, uh, was (free)-internetless in several places, and apparently not inspired in others. Maybe I should admit that I forgot I had a blog for a fair amount of time. I did, however, take a lot of pictures! It will be a miracle if I don't run out of space on my 6 gigs of memory cards. 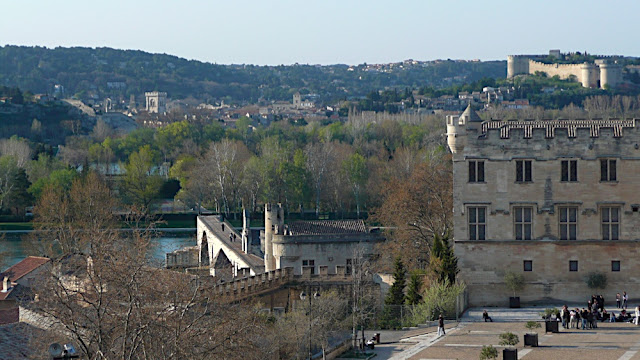 I'm currently in Avignon, Provence, France, as I have been for almost a week, eating fresh French bread and butter and sleeping in. After Sevilla we were in Madrid (by way of all-too-sunny Cordoba), and it was really big. Before I got there and was then inspired to Wikipedia it, I had no idea it was the third biggest city in Europe! We spent exorbitant amounts of money on ice cream without batting an eye, saw a ton of art (also without batting an eye...no, no, a lot of it was really cool). There was just soooo much of it, and after three weeks of walking our feet didn't have a lot of patience. 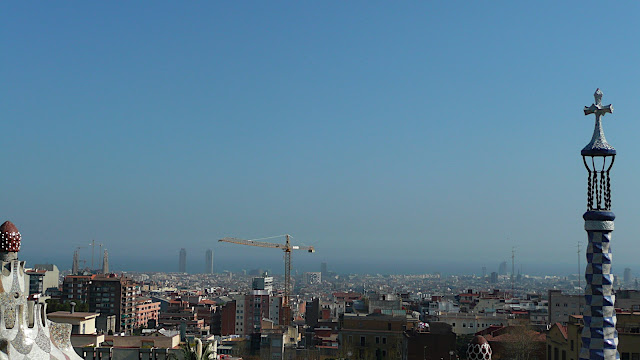 Barcelona and the sea from Parc Güell; you can see the spires of Gaudí's temple la Sagrada Familia poking up on the left side.
Barcelona was beautiful. I was just as tired as I had been in Madrid, but Barcelona kept me excited and we saw a LOT the first two full days. And the first day, which was not full, saw a pretty thorough tour of Barcelona's hospitals. And the overzealous removal of Maraia's cast at the hands of a Catalan doctor. The last two days I was sick, sick enough that visiting Gaudi's Park Guell felt a lot like a chore, and sick enough that I went back to bed after breakfast the last day, which was sad, considering that Barcelona was the coolest place of the trip so far, and there were so many other things we could have done.
Then we flew to Lyon and COUCHSURFED for the first time! It was great, but now I'm getting bored. And this French keyboard is a bitch. Tomorrow we move on to Marseille. Also, it's raining and it's just so weird! I haven't been rained on since the day we went to the salt mines in Poland, and barely even then. Rain. Who knew it still existed.
**Photos added after my return to a sedentary lifestyle. The fuller Spain story, in photos: Sevilla, Córdoba, Madrid, Segovia, Barcelona.**
Posted by Marisa on Saturday, March 28, 2009 No comments:

German, Slovenian/Croatian, Italian, Polish.
Where I was before I got to Spain. 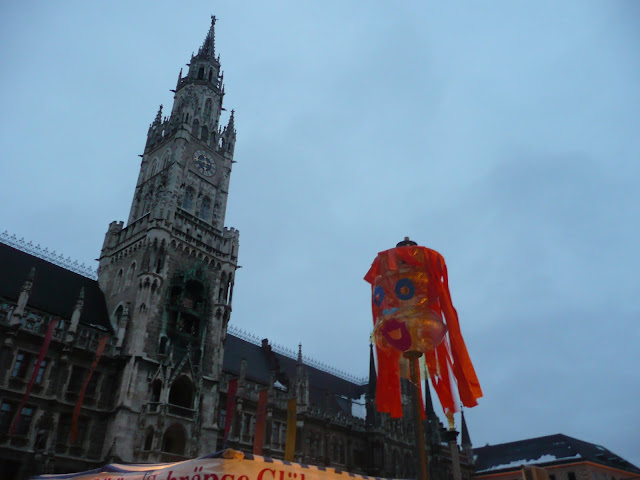 Marienplatz, decorated for Fasching (Carnival). City center of Munich. Monkeys on the streetlamps...why? 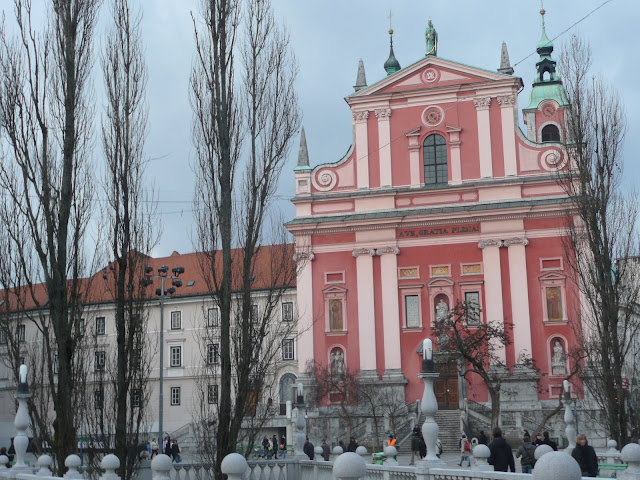 Prešernov trg, Prešeran Square, Ljubljana, Slovenia. This Baroque church (Franciscan Church of the Anunciation) is so pink! There's a monument to France Prešeran, who is considered Slovenia's national poet. 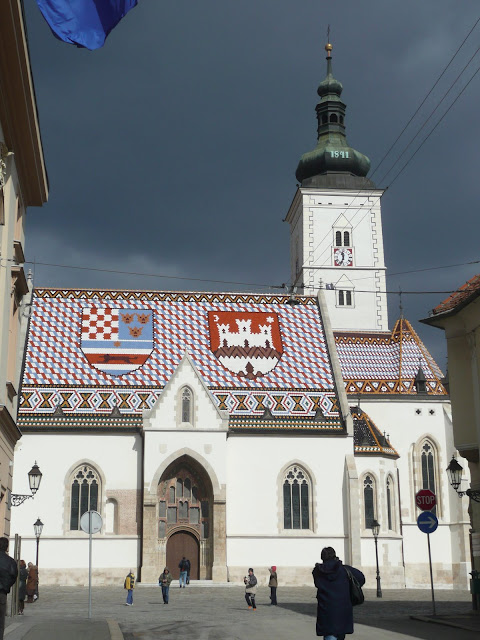 Sv. Marka trg, Zagreb, Croatia. The roof reminds me of Legos. Those threatening clouds never rained on us. Thank goodness. 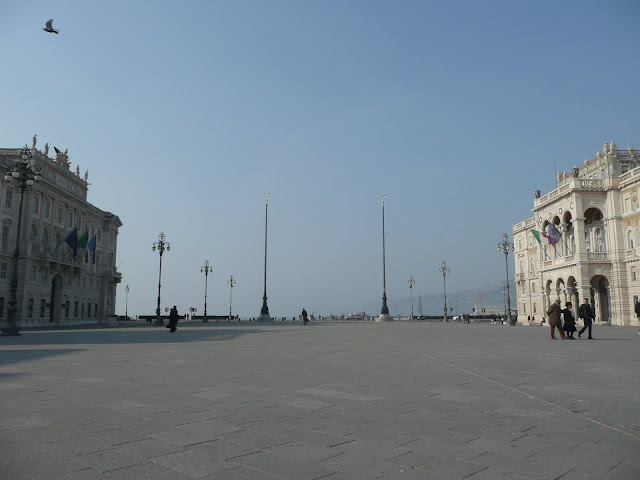 Piazza Unità d'Italia, Trieste, Italy. Largest waterfront square in Europe. Or Italy. Depends on what you read. Hazy sky over the Adriatic. 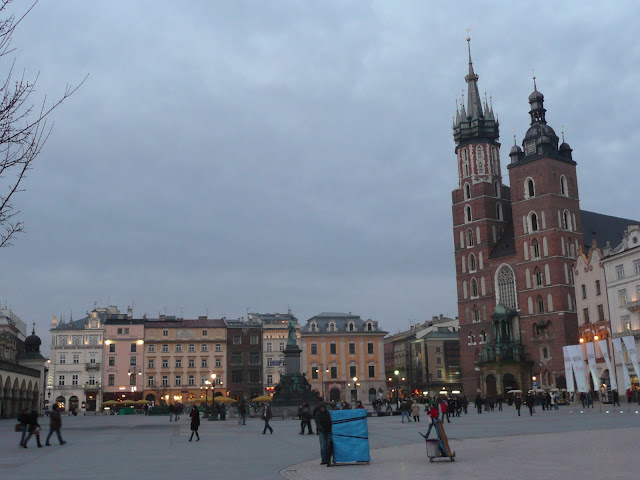 Rynek Główny, Main Market Square, Kraków, Poland. The largest square in Europe, at 200 x 200 m. This is the view from our hostel door--it was so convenient!
Posted by Marisa on Tuesday, March 10, 2009 2 comments:

This is where I am right now: 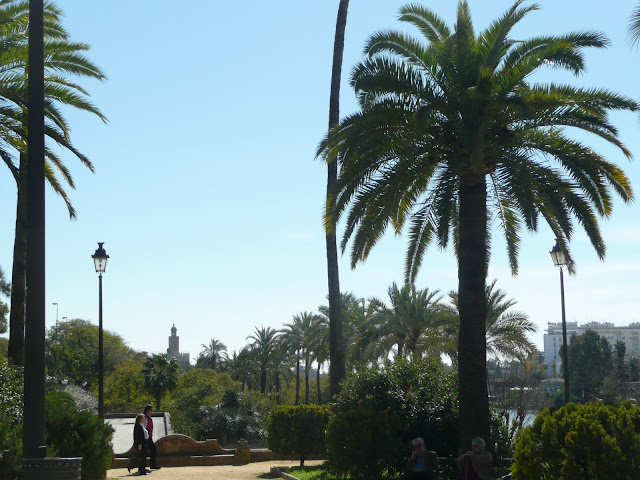 Well, more precisely...in a hostel in Sevilla, Spain. This is where we ate breakfast, on the roof of our hostel: 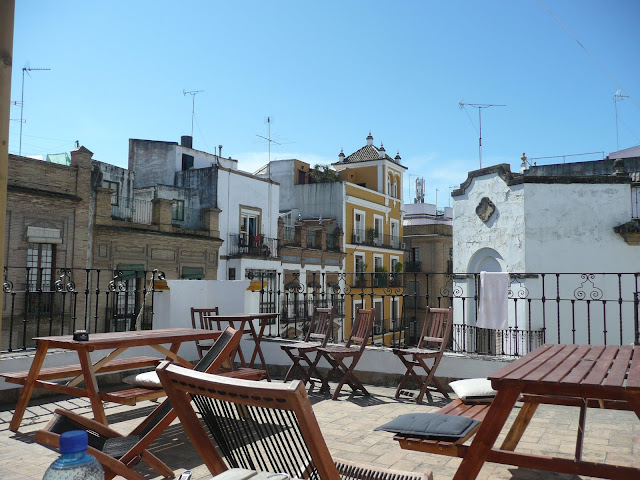 I have never experienced weather like this. Palm trees. I think I'm in another world. Sunburned, sweating, skirts...in the first half of March! On to Cordoba in two days.
Posted by Marisa on Monday, March 09, 2009 No comments:

Trains are one of my favorite things about Europe. In the back of my mind somewhere I miss the convenience of having a car, I guess...but not really. I do miss being able to sing along to CDs in the car. But a car wouldn't help me in Freiburg, where I grocery shop for one person and can carry everything in one bag, and the grocery store is five minutes from my building. The freedom to drive anywhere at any time is gone, but trains make up for it by being so easy. You buy a ticket, you don't miss the train, you get in and sit down and hope you don't miss your connection. But there's nothing more to do, besides not let your stuff get stolen.

The train ride from Ljubljana to Vienna was relaxing--barring the moments where we worried that we secretly had to switch trains. We had a 6-person compartment to ourselves, so I sat facing Maraia one seat over and we both could stretch out our legs. We had enough food to last us all night (in case we couldn't sleep and there was nothing else to do), and so we ate and talked as Slovenia went by and the day came to an end. We saw castles on hilltops, an alarming number of small fires, not all of them tended (maybe it was leaf-burning day in Slovenia?), and eventually crossed the border into Austria. As soon as the signs switched to German, the ground switched to snow-covered, and we concluded that not only Italy had centrally mandated weather. Or maybe it had something to do with the Austrian Alps. (But Slovenia has Alps too!) Eventually we watched a movie on Maraia's iPod Touch, and I thought about how my brother should have given me his free one. The five hours went pretty quickly.

In Vienna we switched to the night train that would take us to Krakow. There was a fair amount of fear involved, because the guidebooks expressly told us NOT to take night trains to Poland, and one of the studetns in our program had his camera stolen from around his neck on one. But we had a private, 2-bed compartment, so we hoped we would be safe. It would probably lock.

It did. And wow, what a compartment we had. It was like a tiny motel room on a train! Two bunkbeds, a little closet, a counter, and a cabinet that included (complimentary?) prepackaged chocolate croissants and mineral water. There were four settings for the lights (one was off). We went to bed almost immediately, and I slept almost all the way 'til 6 am, only waking up twice. At 6:30 we arrived in Krakow and got to sit around waiting for things to open.

We're taking a night train from Krakow to Berlin on Friday, and it is a lot cheaper. Yeah, Vienna-Krakow was expensive, but we had no option besides private rooms, so we had to. It's probably the only time I will enjoy a night train that much. We'll be in a sitting car all the way to Berlin, with strangers and probably no locks. And two hours after we arrive in Berlin, we have to be on a plane to Spain...

Stress doesn't help make things go faster/better on trains (or really anywhere), so I'm going to try to enjoy being at least half-awake for an entire night, before getting on one plane and then on another one and then landing in another country whose language I don't really speak. (That is a key difference from in Poland, though, where I absolutely don't speak the language.) But I wish we had another private compartment. 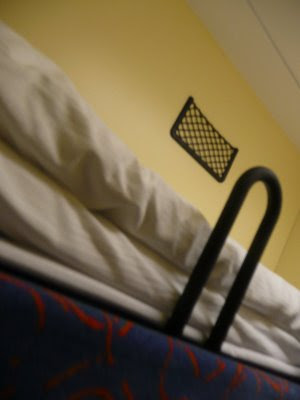 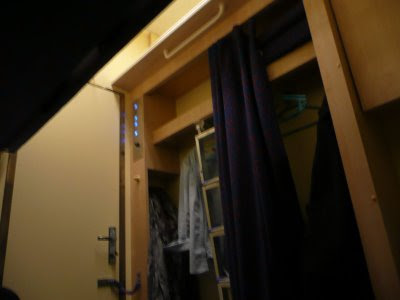 1. Top bunk!
2. Closet, viewed from bottom bunk.
I guess that tall people wouldn't find this quite as exciting/comfortable as I did. 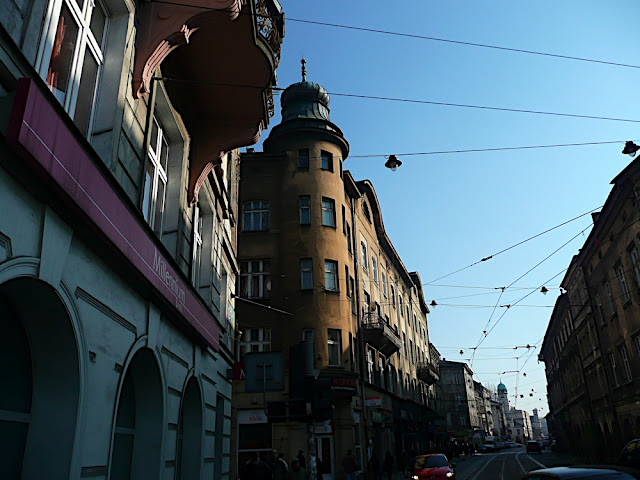 I'm in Krakow, Poland for the week. Since I appear to get comments about travel destinations occasionally, I thought it would be wise to post about this BEFORE I was gone, in case any cool suggestions were to show up. So, here goes:

I'm in Krakow! I saw St. Mary's, and Wawel Castle (from the outside, it was apparently closed today), and walked around Kazimierz, and am going to the salt mines. I'm aware of Auschwitz's proximity. The Gallery of 19th Century Polish Art is being renovated, so I didn't manage to get in (is there a temporary location? I can research this myself.). What else should I do?!

I'm also really excited about the giant mall by the central train station. Maraia and I felt strangely at home there, even though I hate malls in America. And it was open after 5 on a Sunday! Open on a Sunday period was CRAZY after being in Germany for so long. We were surprised by how much open stores on Sunday surprised us.

But oh man. I have needed new shoes for so long. And my jeans are ripping in a very bad place! That's what I get, only bringing one pair on a 7-week trip.

I have to sleep. Good night. Salt mine tomorrow!