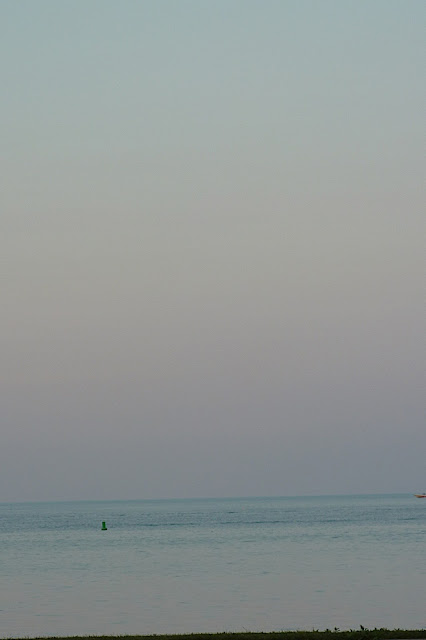 The color changes gently and was hard to photograph, but I like it. There was also a freighter, a nice red one, but I wanted to keep riding my bike so I didn't stop again when the angle was right.

I promise I'll write about Rhode Island, or something, anything, soon. Once so much time passes, there are so many things I could say, but no convincing way to decide which I should say, and then I think about the things I won't say and fall asleep. Good night, world.
Posted by Marisa on Tuesday, July 27, 2010 No comments:

Labels: Summer outside the City

Last Week, I Was in Michigan

On Monday, my primary goal was to not fall asleep until bedtime. My secondary goal was to fill the time until then. I wanted to clear enough space on my desk to use it, or tune my harp, or, you know, eat dinner. But all my energy was directed toward goal number one, leaving nothing with which to fuel actual activity. 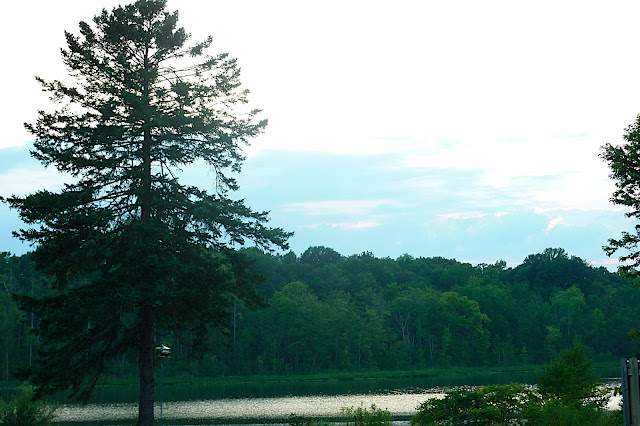 The night before, I was at a house on a small lake with some of my favorite people, and it was the Fourth of July, and we ate burgers and swam and got squirted with water guns and watched fireworks set off up close and personal on the lawn. We got bug bites. Exhausted but unwilling to end the party, we ate delicious popcorn and stared at boxing people on TV and I tried to fall asleep against the side of the couch. And then, finally, finally, we retired to our beds or makeshift beds and cursed the heat that kept us up for much of the night. Monday, I drove all the way home, yawning and scratching and yawning. In Wayne County, where I wrote this part of the post, we had a heat advisory. It was so hot, and I was so tired.

I hoped that if my parents fed me, which could realistically happen within two hours, I would wake up. Food did happen to me eventually, but first I fell asleep twice. So much for goal number one.

To swim happily in the lake, you find someone who can sort of steer the raft with its tiny motor, so that you bypass all the horrifying plant matter by the dock and can jump off into refreshing but warm lake water, weed-free. None of this seems too difficult, although I'm sure I'd be a failure at steering. Anyway, in the end you have to get back on the raft, and there is a "ladder" to aid you in this. A ladder with one metal rung, if that even counts as a ladder, and then a chain hanging off that with a loop. That is the first rung, a rung that moves around in the water as you try to position yourself on rung number two and then haul yourself up onto the raft. The guys struggled. I was worried. But then I did it easily, and Ali's youngest sister followed me up, also no problem. And I don't even exercise anymore! (This is where I'm not going to go on a thing about how I miss the CCRB at U of M, but where I will stop to tell you that my bedroom floor—and my desk—are now essentially clear, so when I return to Michigan, I can unroll my yoga mat for the first time in months!)

To tell the truth, I had only one triumph in mind (not the previous one) when I started this list, but felt it could only be noteworthy if there was a succession. So here's another one, one with more lasting benefits:

Over the past few weeks, I've discovered that some of my favorite clothes from pre-Germany times fit again, which means I can wear more things! Without shopping! This is especially good because shopping trips are becoming increasingly frustrating. Dresses that fit my bottom half are too big for my top half. Jeans that fit me are ultra low-rise and I don't approve. Even good t-shirts are hard to find. But a miracle has occurred: a pair of jeans that I have owned since fall 2006, fairly skinny jeans purchased before the label "skinny jeans" had stuck, jeans that I realized were too big at the waist after I bought them, which were then too tight when I tried them on this spring—now, mysteriously, fit me almost perfectly. Okay, they're not perfect. But after wearing them for three days, they still hadn't even tried to fall off. This is unheard of. After a taste of jeans-wearing-security, I'm thinking I might have to renew the quest for jeans that actually fit me. But it's so hard.

And finally: my denim miniskirt (possibly my favorite clothing item of 2006-2007) fits again, which enabled me to build the perfect outfit to head west to Ali and Drew on the Fourth of July: the miniskirt, a black scoop-neck t-shirt, and my ten-dollar, not-leather, red cowboy boots. (If Emma had had her way, I'd have been wearing a black leotard for my top, but American Apparel is too far away and expensive, and Emma's already starting trends in Pittsburgh. I think she's doing okay without me following along. Plus, how do you explain to someone why you are wearing a leotard?) The outfit seemed right, and I've been dying to wear my cowboy boots because it's been months since it was coldish. And the miniskirt had been out of my life for well over a year. I usually feel that it plus not winter (read: bare legs) is sort of questionable, and I have this idea that sometime soon after college you have to start dressing somewhat more modestly or elegantly, but I'm not sure when that happens. Ali and Ali's mom approved of the outfit—as did some guy at the gas station in Detroit. 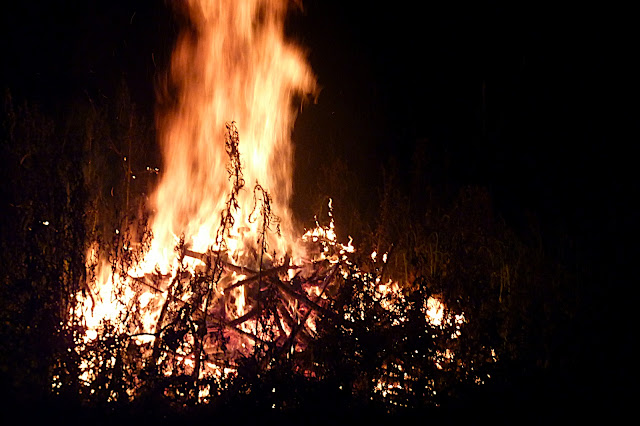 This is unrelated to the gas station. This is the bonfire from Sunday night. Those flames are much taller than a tall man.

I'd pulled to the pump ahead of him because it's the one I always use and I didn't think they were ready to leave yet, but then felt bad when I realized he wasn't pumping gas anymore, so I'd inconvenienced him. As I was starting to pay for my gas, I heard him yell out that he liked my boots, and asked where I got them. The answer was some random secondhand place. Then he asked me where I was going. Was it to church? Uh, right. Right, friendly gas station man. I'm headed to church at 12:45 in a short skirt and cowboy boots. On the Fourth of July. He kept talking but I had a hard time hearing him, especially while trying to get my gas and not do something wrong and embarrass myself. I had to insert my card three times before I pulled off my zip code—you see, I tend to get flustered when people talk to me at the gas station. People being strangers, always. But he won for most friendly.

Anyway, I would love to grace you, the internet, with a photo of my beloved inferior red cowboy boots (my real leather ones are nicer, but less interesting), if not the outfit which I have attempted to describe, but because I am the photographer of my life, I have no photos of myself, and my boots are in Michigan whereas I am in Rhode Island, the Ocean State, or as my friend Rachel's dad told me, "the Kentucky of New England. And we live in the sticks." On Friday, I reacquainted myself with the Atlantic after eight years away, but that is clearly a story for another time. Since my photos are not plentiful, I will leave you with another picture relating to the Fourth of July celebrations: 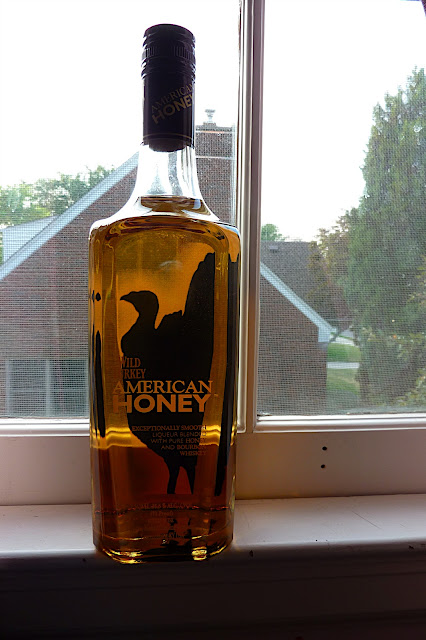 This honey-whiskey liqueur was my birthday present from Ali. I like the pretty goldy color (accentuated by my bedroom window) and the mysterious turkey silhouette. Yes. Such a mysterious turkey. Now laugh.
Posted by Marisa on Monday, July 12, 2010 2 comments: