= a poem by Jacques Prévert, who is a French poet that I like. And took a whole class on. And some of whose poetry I performed on stage.

Three matches one by one struck in the night
The first to see your face in its entirety
The second to see your eyes
The last to see your mouth
And the darkness all around to remind me of all these
As I hold you in my arms.

For the record, this trip to Paris was less romantic than last time around, although that doesn't say much (see said goodbye to my boyfriend of 5 days, slight pining was involved). But this poem has an appropriate title, if not appropriate content, and night! pictures! 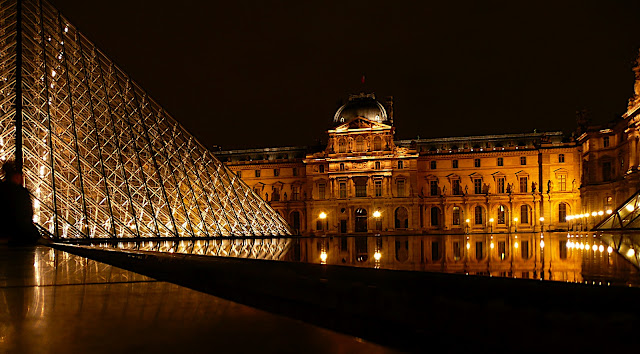 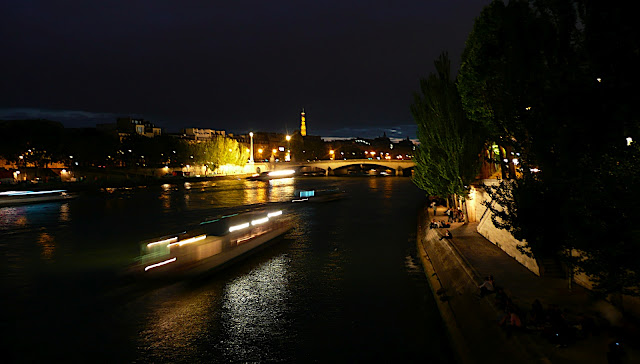 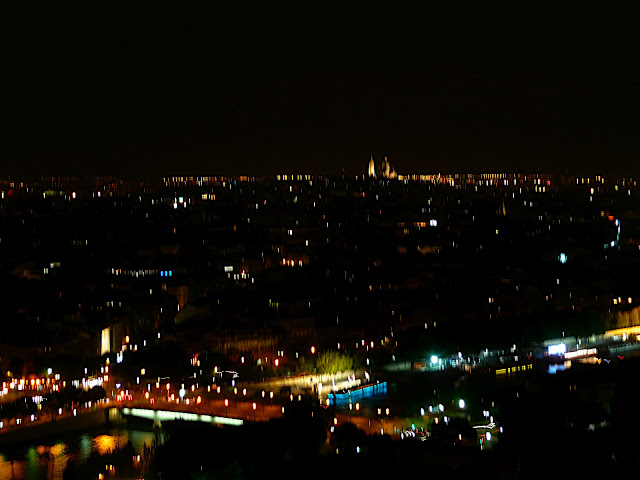 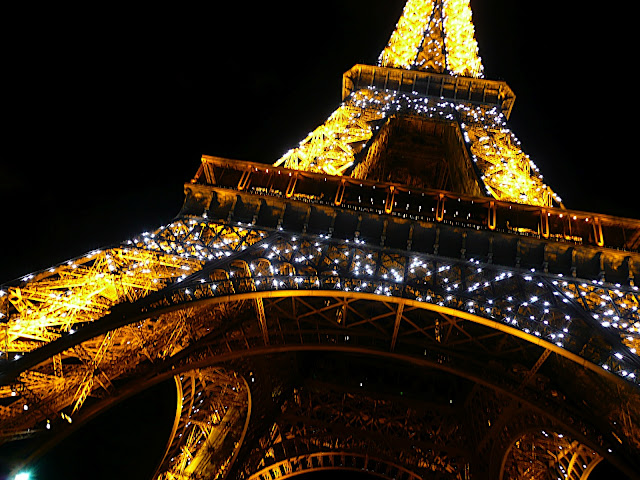 1. Le Louvre, mon préféré.
2. La Seine from a bridge.
3. La Seine from la Tour Eiffel, Sacré Coeur in the distance.
4. Requisite shot up the towers' legs, with twinkly lights (seizure-inducing when on the tower as they go off).

I love Paris (in the rain)

Four years ago today, I got four stitches in my finger, said goodbye to my boyfriend of five days, and left for France for two weeks. It was my first time in Europe and the most expensive thing I'd ever bought (with money I didn't have yet). Most of the numbers have gotten much bigger since then.

Four years ago, grey skies couldn't take the sparkle away from Europe. This may sound rather spoiled of me, but grey skies and constant rain ruined Prague—and the stupid, creepy man in the hostel, but that's another story. Looking at my old Paris pictures, I realized that the first day was cloudy. My pictures of the Louvre had terrible lighting. And yet the Louvre was my favorite building in Paris and I would have happily spent hours in its courtyard. 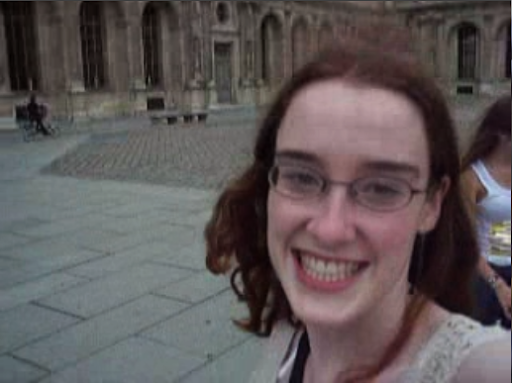 I don't remember if I decided Paris was my favorite city while I was there or after I came home. I do remember deciding with my friend Kitty that we should come back in two years (with our boyfriends) and enjoy Paris all over again. It never once occurred to me—nor has it yet—that I wouldn't go back. Because I would come back somday, there was no rush to experience everything. Napoleon's Tomb and the Musée Rodin? How about a picnic and a nap in front of the Eiffel Tower instead. Versailles? Next time! 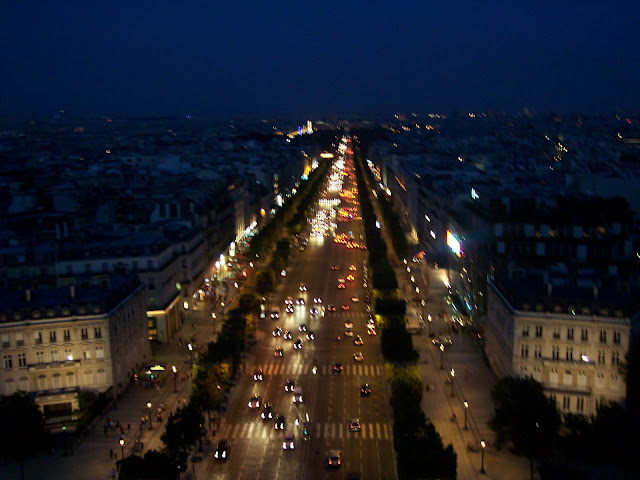 I loved the fancy metalwork outside the windows (I always want to say 'balconies' but that is clearly wrong), and the trees against the buildings, and the history. The way so many buildings were lit up gold at night. The convenience of the Métro. I still love subways, although Paris' is more complicated and older than others I've been in since. The buildings are still lovely, even if after so much time in the stucco of southern Germany, the grey and tan stone seems rather cold.

It's funny to think how much I loved the view out my hotel window—mainly because it was my view onto a Parisian street and how exciting is that! Watching this video I took as it rained on my last full day in Paris, I love the view all over again.
Yes, I did go to the trouble of holding my iPod headphones up to the camera speaker to get Regina Spektor's song in the video.

I really didn't mind that rain, despite my lack of attractive rain jacket (17-year-old self, why have we not remedied that?), because it meant I could now sing along and mean it. My brother John was actually disappointed for the same reason when none of the rain forecast for our weekend showed up.

I wasn't. Loving Paris in the sun is nice too. 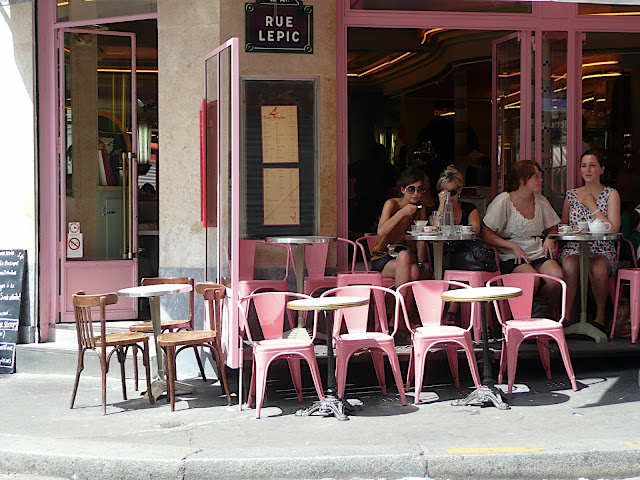 Yup, that's me. Overbooked and overwhelmed and overworked—maybe overworked is stretching it. Maybe underworked would be more accurate. I am exhausted because I've been traveling and I am overwhelmed because I haven't worked enough and too many things are due on Wednesday, the day after my birthday, and then on Thursday I catch a train before 7 am to Paris.

Paris! Of all the cities I've been to, it's still my favorite. Maybe that's because it was my first trip to Europe and everything was amazing and I was sixteen and ready to fall in love with things. Hopefully I still think it's great, because if I get up at 6 am on my post-birthday weekend and I am not blown away by the beauty of everything, I'm going to be disappointed.

My brother John is still here. He spent a week in Freiburg and then accompanied me to Munich, Prague, Vienna, Salzburg, and all 7.5 hours back to Freiburg. He is sick, and he is tired, and lately we are only in Freiburg in between the long weekends and the breaks. Only in Freiburg for my classes and my homework and my presentations and essays.

I'm really thrilled with Freiburg right now, as I'm sure you can imagine. (No! Get me away from all this responnsibility!) At the same time, I don't want to go anywhere else for a while, unless it involves staying in one place and doing next to nothing. At least I still like trains. I really like trains. And Paris! Plus, after Paris, I have no hostel reservations and no train tickets (except for the accidental SECOND Freiburg to Frankfurt Flughafen ticket I bought for John...anyone need to get to Frankfurt Flughafen from Freiburg between June 16th and July 15th??? Only thirty Euro!). I have nothing set in stone until I get on a plane on August 17th and fly home.

= please can I have one right now?
I am 100% devoted to cats. Seriously. But in Europe, there are dogs everywhere: on the streets, in the parks, along the rivers, and in the restaurants. (Usually on the street, but still.) They're well-behaved, they don't need leashes, and they accompany their owners so many places.
Most importantly, dogs are basically always happy! Look at him: 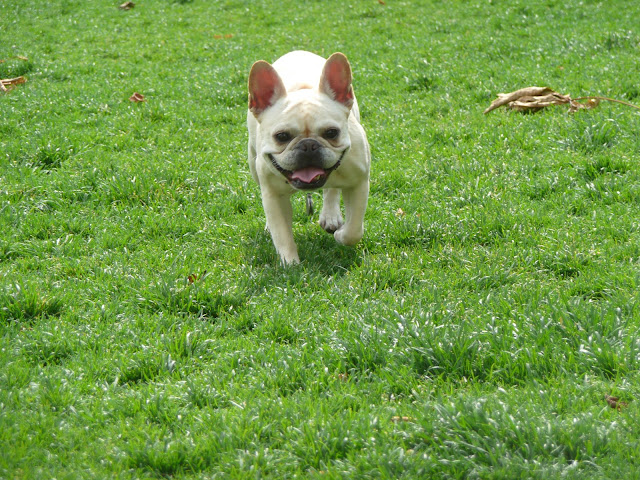 So cheerful. Even though he's ugly, he's adorable. I want one. Not this one. But come on, life would be so happy.
Eleven weeks from now I'll be at home with my dog. Or at the Secretary of State, getting a new driver's license. Or at the dentist. Hey Mommy, did you ever make me an appointment?
Point being: Dogs!
Posted by Marisa on Tuesday, June 02, 2009 1 comment: