That's all I want this weekend, at least that's tangible/measurable (if the curtains are hemmed, the will was there).

Paying back student loans, it turns out, saps all your extra money. No paid sick or vacation days kills the possibility for extra money. Life, friends, is boring! 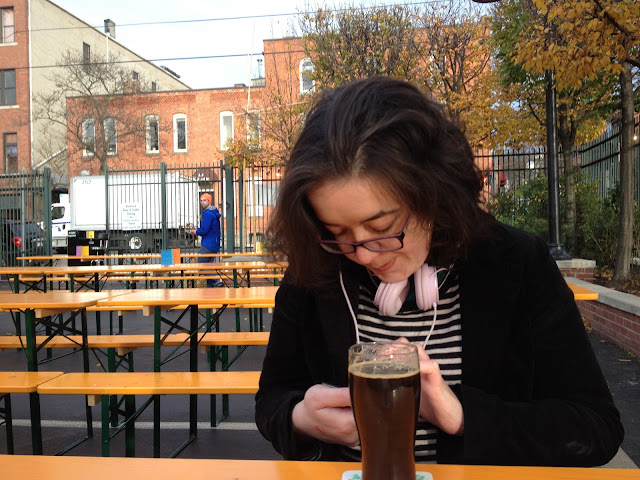 My brother's baking bread today, so hopefully by tomorrow I'll have some. Free, and so delicious.

I'm going to the cider mill tomorrow, even though the money was spent yesterday on mulled wine at the new beer garden and Strongbow and cheddar ale soup and ravioli, split with Emma. A beautiful evening followed by a lovely date with cocktails and pizza and a tasty s'more.

As for lipstick – red lip gloss forever, I guess. It's been running out for a year, but never actually does.
Posted by Marisa on Saturday, October 27, 2012 No comments:

That's not true. I hate my blog.

I hate my blog because it's inconsistent. It's been around for over four years. Most of the early posts are pretty bad, though they served their purpose, which was keeping in touch with friends while I was abroad. More of the later posts are acceptable, but many of them are months apart, and there are still crappy ones. Just write something, I told myself. Get it going again. Occasional bad posts are okay when they're hidden by a flood of content. They're not so acceptable when, like this one, they are one lonely dot on a sparse timeline.

I hate my blog. That's not true. I'm just frustrated. It's been so long, and for what?

Maybe it's time to start a new one. Almost three years ago, I was thinking about renaming the blog, since I was no longer an occasionally-itinerant Landstreicherin in Europa. Then again, I only had a few months of college left, so I would be moving somewhere, maybe even traveling again. Back then, I was applying to teach English in Austria through the Fulbright Kommission, but that didn't work out so well, leaving me without a plan at graduation. (My application got lost in the mail.)

I moved to Grosse Pointe, and was not a tramp, but an outright, sedentary bum. Not a cent of income for four months.

Okay, not a bum. I went to Ann Arbor every weekend to see my boyfriend, and then I moved to Ann Arbor and got my surprisingly long-term restaurant job and commuted to Detroit every other weekend and then some.

But now, it's two years from then, and I haven't even moved in over a year, and my blog is pretty much dead.
Posted by Marisa on Thursday, October 04, 2012 No comments: