I often wonder why I bother reading this section. I guess there are occasionally nice pictures and sometimes interesting perspectives on places. (I like this short blog post about traveling with an RV in the Southwest. Of course, I also desperately want to go to the desert, so maybe I'm biased.) But my god, New York Times. Europe for Every Budget my ass.

They have 10 cities with save or splurge options, and I noticed that I'll be going to two of them in the next few months (and have been to five of them already, great, now I feel like I need more of an imagination). So I clicked Paris, because I haven't booked a hostel yet, and it's my favorite so I thought I'd read it first.

Ha. Every budget. How about under €50/day? Although I'm going the weekend after my birthday, so I might have to go shopping.

P.S. If you want to see what my duvet cover and pillowcase look like (if you are crazy like me), go to the save or splurge article on Madrid and click on the 4th picture!
Posted by Marisa on Wednesday, April 29, 2009 No comments:

You might be wondering—where have I been?
The answer—going crazy. In my room. With my computer. And the internet. If I were you, I would be unhappy with me for not utilizing my internet connection more productively. Actually, as me, I am unhappy with me. Are you starting to see the craziness? You probably aren't actually unhappy with me because whatever, blogs.
I haven't gotten much done, other than labeling all 8 million photos from the trip on iPhoto and actually weeding through the first two weeks' worth. Mostly I've been busy researching the percentage of times I can successfully log into Wolverine Access and attempt to register for classes for next fall—not that I know what I want to take. The result? I'd say about 90% of the time I cannot access my account from my own computer. The one time I did, I realized that the class I was going to register for required teacher approval, so I couldn't actually sign up for it yet.
I've also learned that my internet connection is total crap and that Facebook has a lot of trouble with its scripts, whatever that means. They stop responding about 50% of the time I am on my Facebook homepage.
Oh no! Now you think I'm lame, as well as insane. Since I wrote here last, I also:
Went to Inis Mór, largest of the Aran Islands!
Tried a Guinness (gross)!
Tried a Bulmers cider—much better!
Saw Ireland's only fjord!
Went to quiz night at one of the Irish pubs in Freiburg!
Watched 5 episodes of Battlestar Galactica! (Is that helping the not-lame? I vote yes.)
Ate at Kartoffelhaus ( = potato house ) for the first time!
Baked a soufflé with delicious Irish cheddar for the first time since I was in Michigan!
Watched the sun set on a hill above Freiburg and roasted marshmallows!
Rode a gondola thingy up a mountain and was above Freiburg again!
Cleaned my room!
Started Sommersemester classes. 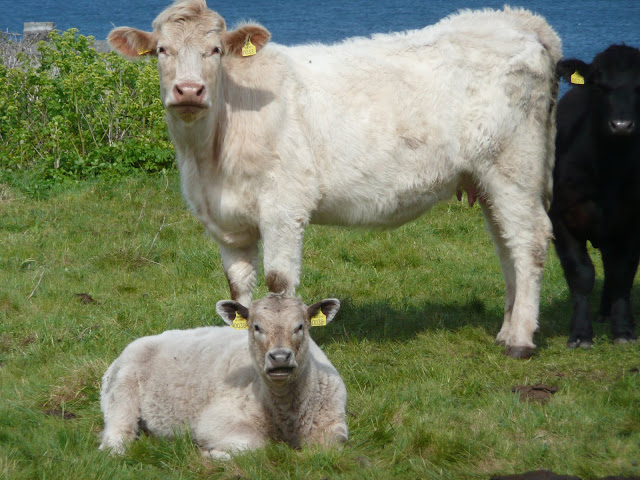 I'm in western Ireland right now--the town of Lisdoonvarna, a spa town and home of the Matchmaking Festival in September, in the area known as 'the Burren,' which isn't far from the famous and beautiful Cliffs of Moher. Which I saw today! 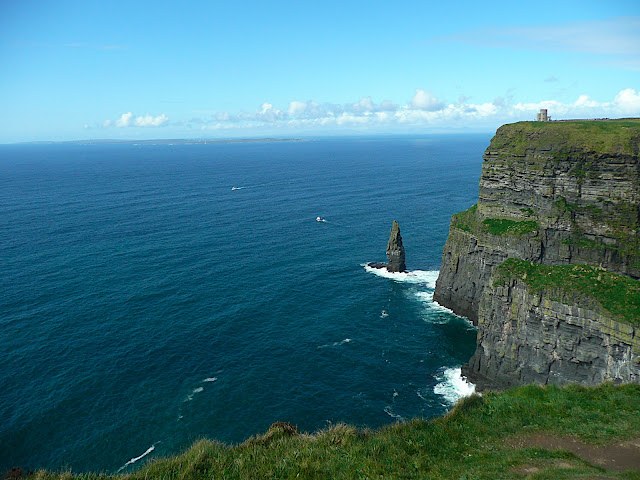 Tomorrow Jeff and I return to Galway, which is good since we haven't really seen it yet, but sad because I'm really into the late afternoon view from my bed in the hostel here. I have a bottom bunk and I can sit at the foot of it with my book on the windowsill and the sunlight on my head and book and the heater against me and read for hours. The sun seemed to move so slowly across the sky as I read at least half of the romance novel set in Northern Ireland that I obtained at the hostel in Nice. The sky was blue and the grass really is so green here and there are dandelions and daisies sprinkled across the lawn outside the window as well as little birds. Somewhere not too far away there are bound to be horses and sheep and lambs! and cows and calves, and I don't think I want to leave the Irish countryside yet. 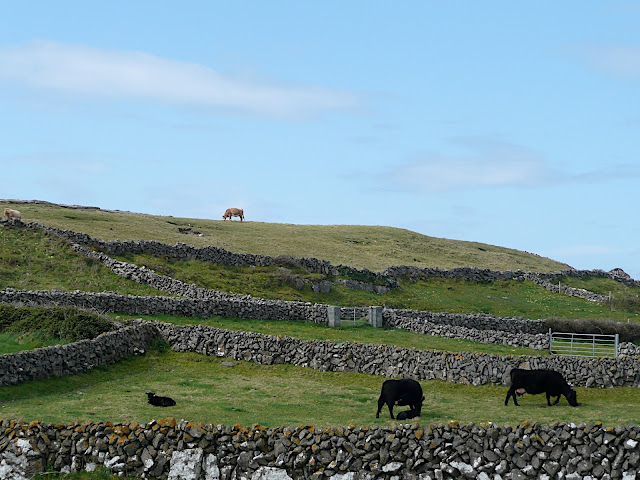 In romance novels women are always going to little towns in Ireland (or things like Ireland) on holiday on whims/to solve grave family mysteries and end up staying and staying--often without quite knowing why, just for a feeling. Or their detective work. Or, although they don't want to admit it, for the irritatingly captivating man down the way. You know.

Lisdoonvarna is the home of the Matchmaking Festival, although that would be a long stay (4+ months!) for just a feeling, waiting for the irritating man, and I'm pretty sure I don't want to be wedded to the land of western Ireland, even with all the adorable livestock. The afternoon view from my bed remains tempting, but sunlight isn't exactly something you can count on here. 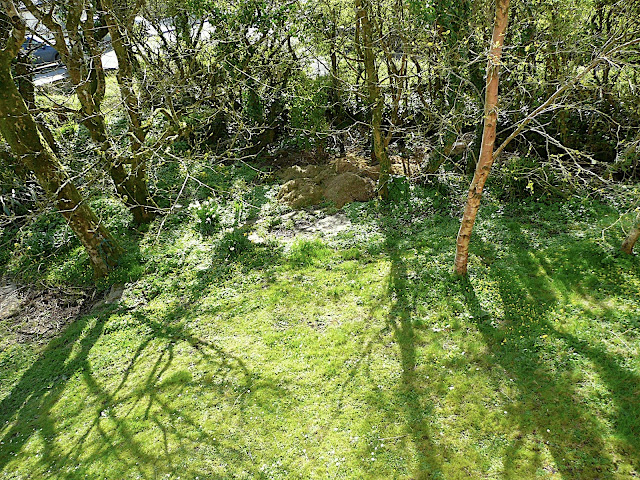 Photos added after my return to a sedentary lifestyle.
Posted by Marisa on Saturday, April 11, 2009 1 comment:

( = das Mittelmeer, but I don't think Germany really has much to do with it.) 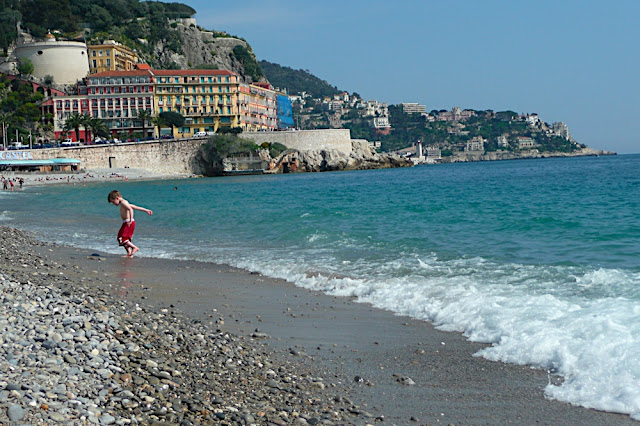 On the beach in Nice.
Lately, I've felt like every post necessitates a picture, but one: I don't want to take up too much space on Picasa double-posting, two: my camera is downstairs and plugging it in is a lot of work, and three: constant pictures take away the excitement of pictures maybe?** 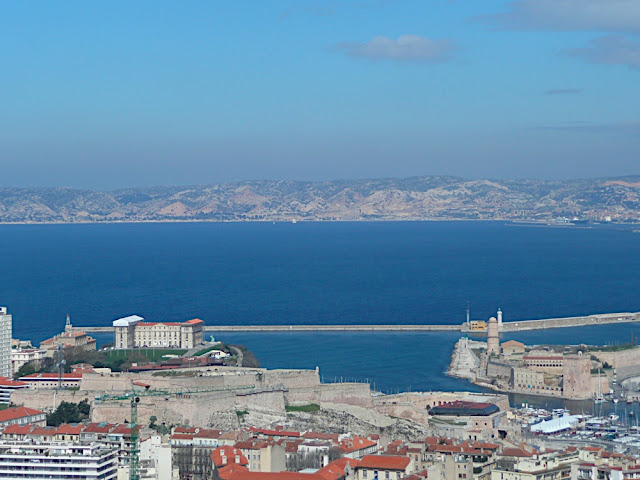 Marseille's harbor from the basilica Notre Dame de la Garde, which crowns the city.
Also, I've been reading the Niccolo Rising series by Dorothy Dunnett since I came to Germany in September and I just finished (and also basically started) the third one in Avignon last week. Even though it was set primarily on Cyprus (but also in Bruges! I've been there!), there was lots of voyaging across the Mediterranean and Genoese merchants (I was in Monaco yesterday! it was originally a colony of the Republic of Genoa) and Knights Hospitaller (there is a fortress of theirs on Marseille's harbor) and I'm ridiculous and found this all super exciting. The previous book took place in Trebizond, the last outpost of the Byzantine Empire after the fall of Constantinople... Unfortunately, I will not be making it to Istanbul this year, let alone farther east along the Black Sea. Or to Cyprus. Or Greece. Or any more Mediterranean after Monday, probably. Which means no swimming. Unless I swim in my underwear or clothes in the next three days. Sad sad sad.