Those are the trains I took to get from Ann Arbor to St. Louis on a Thursday at the beginning of March. I had ridden the Wolverine many times before, but only commuting to and from Detroit, never truly heading west or really going anywhere. I consider this trip my first foray into American rail travel.

I could have flown one-way to St. Louis for $90, instead of the $81 I spent on Amtrak. But to that, I would have added the AirRide bus, and thank goodness it exists now, but that's more money, another step. The train station is actually closer to my apartment than the bus station that would have taken me to metro airport. And, of course, I just wanted to take the train. If I, great train proponent that I am, don't, who will? So I left my home dark and early—before 7 a.m.—and walked down the hill to Depot Street, waited a few minutes (it's the train from Chicago that's usually late), climbed aboard, and settled in for a nap. 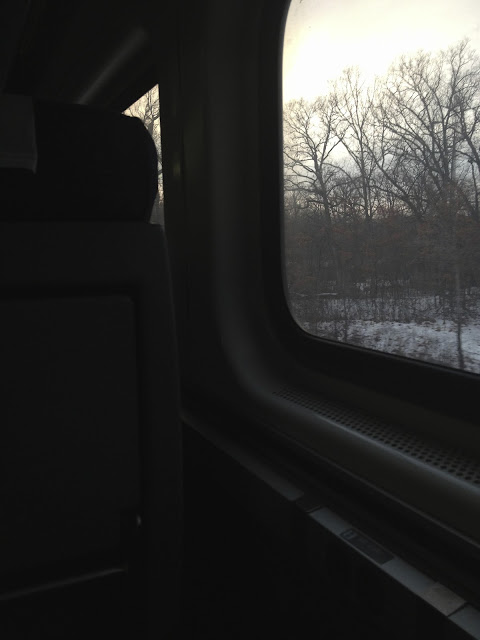 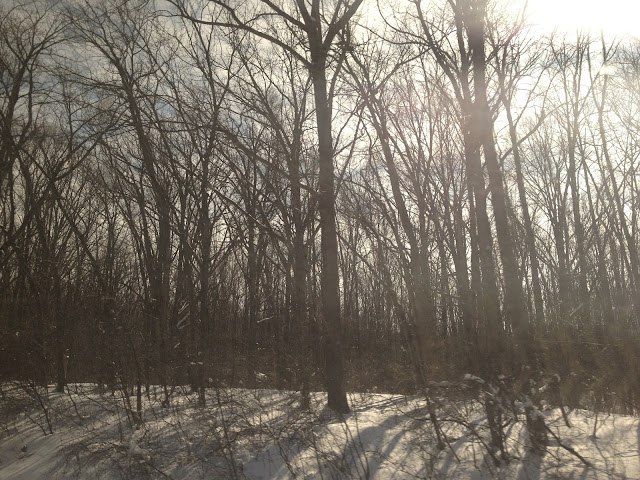 The grey clouds of the morning departed before Chicago. Most of the weekend was sunny and warm—a first breath of spring. Still, my boyfriend and I lamented how early in the season our trip was. If we'd headed south a week or two later, we were sure we would have been greeted by green things.

The train ride would have been much prettier if the world had been growing again. Tree branch silhouettes are lovely with fresh snow; they're striking as a strong silhouette against a blue or pink sky. Instead I watched naked trees against a white-grey sky that blended all too well with the lackluster snow melting on the ground. The trees, leafless, didn't hide the random buildings scattered in the distance. The dead fields. If they were green, the patches of trees could have approximated a forest. When we drove up I-75 to visit my grandparents in Flint, I loved to see all the trees along the side of the highway. Full and green, and then later, full and red and orange. It was nice to see them. Of course those several rows of trees along the railroad and the interstates aren't forest.

I thought about going up north, though. I dreamed of a summer trip to the Upper Peninsula. Please, can this be the year? Then I read the book Ali had shipped to me the week before. I read about the author growing up in northern Michigan. Listening as the calls of wolves became fewer and fainter. I thought about wilderness, as the train rumbled along toward Chicago. 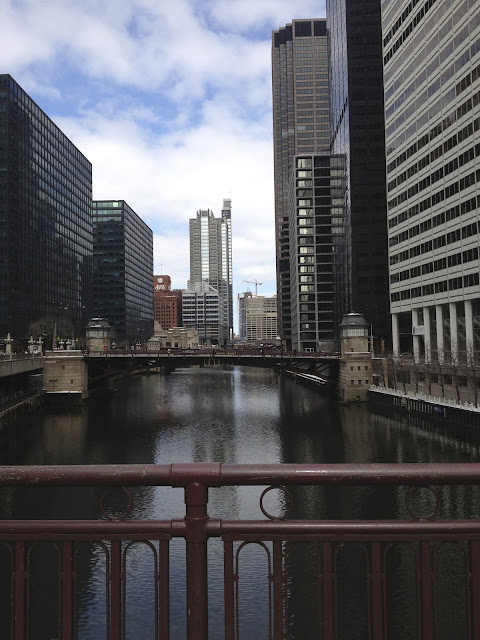 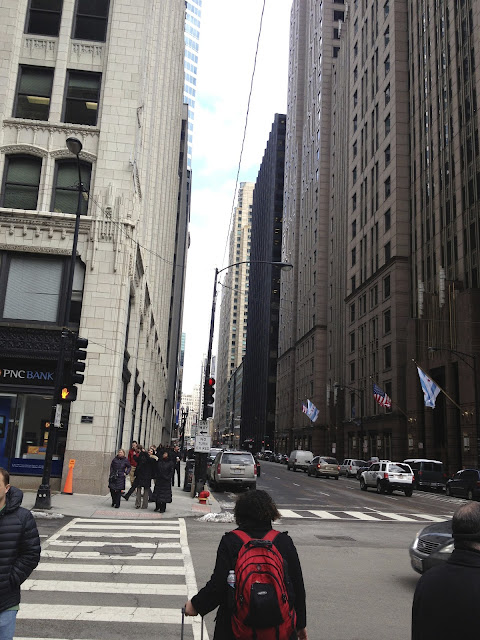 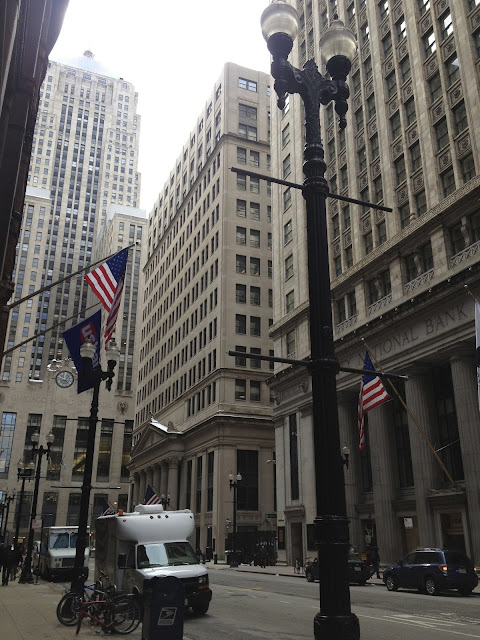 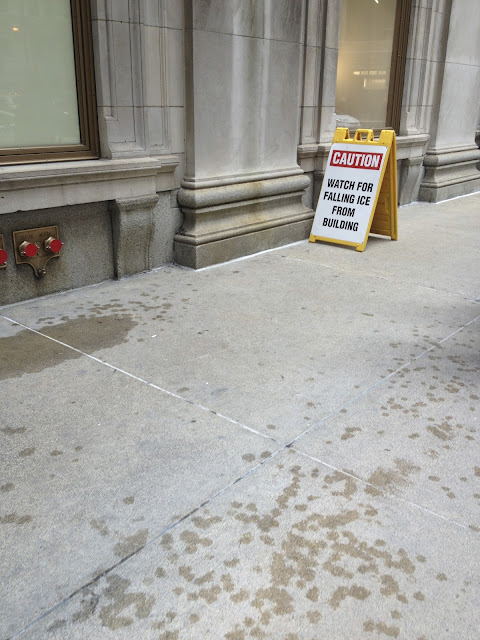 I took an aimless walk in Chicago, then circled back toward Union Station and ate a grilled cheese by myself, with the wolf woman book. I thought a lot about milkshakes but didn't get one. 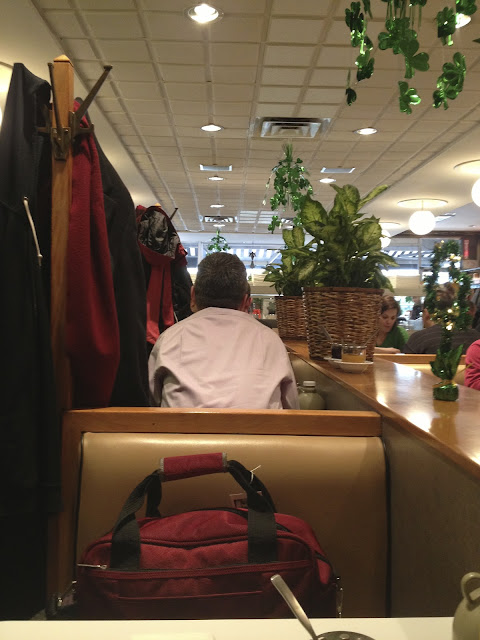 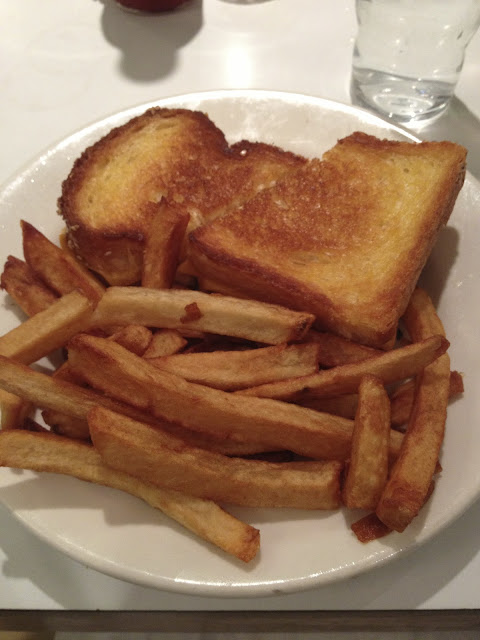 Then I headed into the old train station and settled down to read some more. 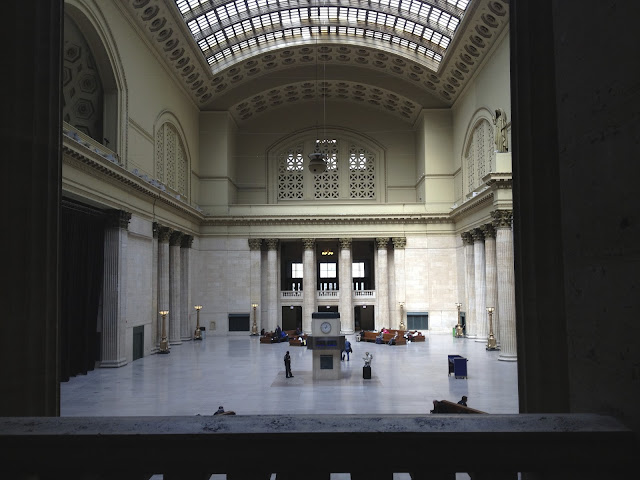 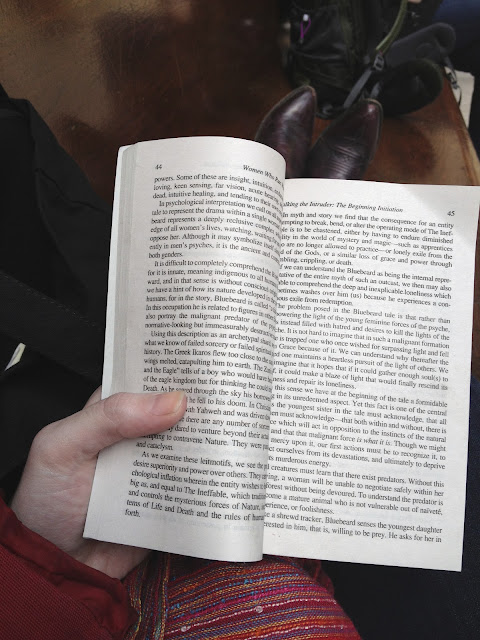 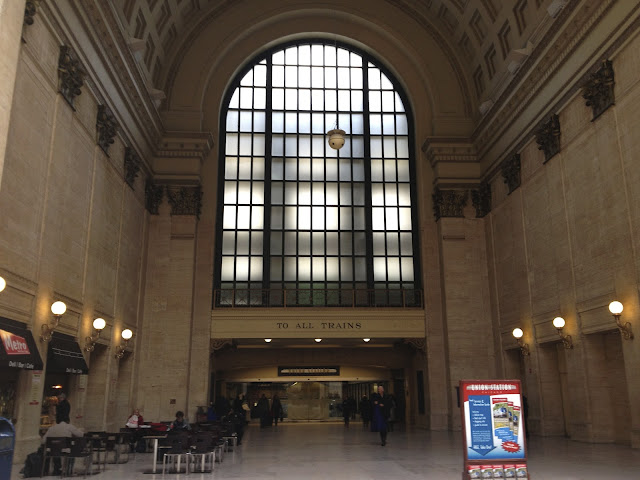 I almost missed my train because I lost track of time and hadn't realized they checkyour ticket before boarding in a big, real station like Chicago's. At home you hop on at the last minute; the train barely stops. Anyway, I made it. Eventually, I mustered the courage to buy a bottle of water and get a glimpse of the Sightseer Lounge car. It looked pretty nice, with its panoramic windows. Sunshine. People to watch. So I spent a few hours there, with my laptop safe nearby in my AsympTote from Meg...and my other luggage in the other car, out of my sight. A little nerve-wracking, but okay. 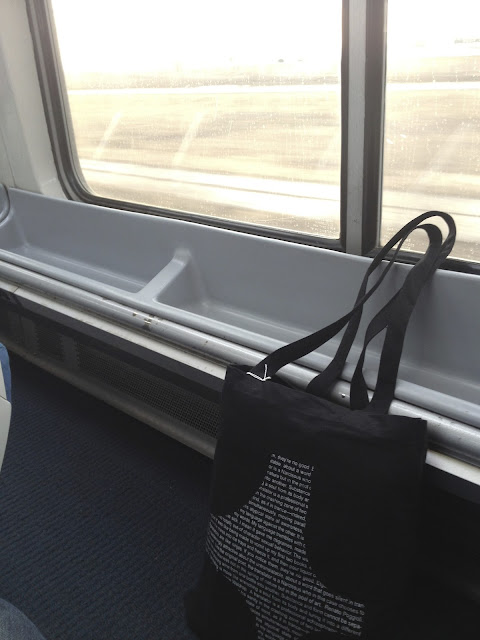 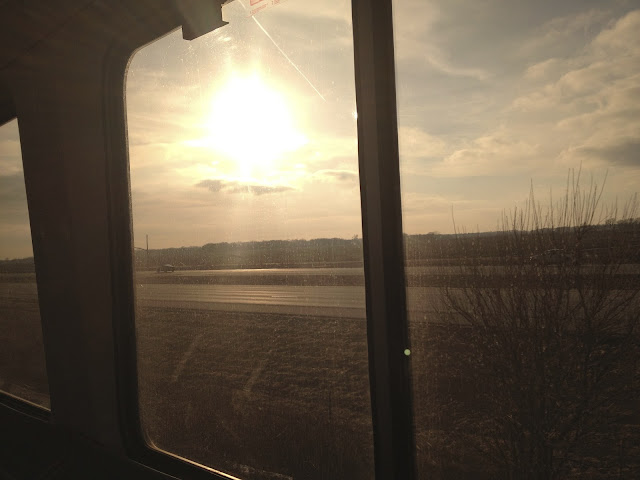 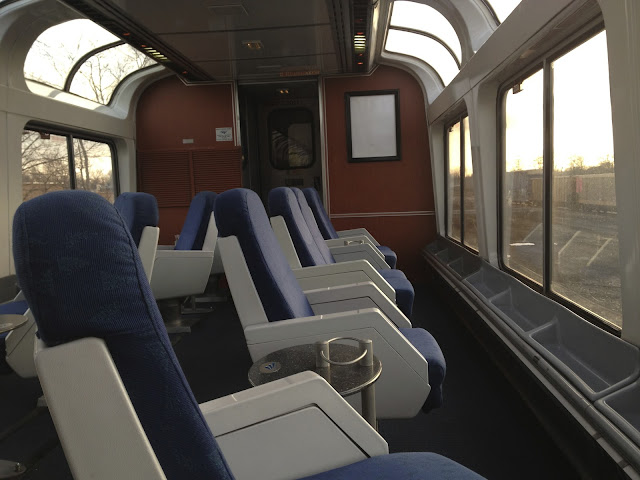 I switched to a different book, and as the train headed south and west into the sunset, I followed Patrick Leigh Fermor south and east into the Balkans and toward Constantinople. I read about the thick, wild forest of the Carpathians while riding across flat land. 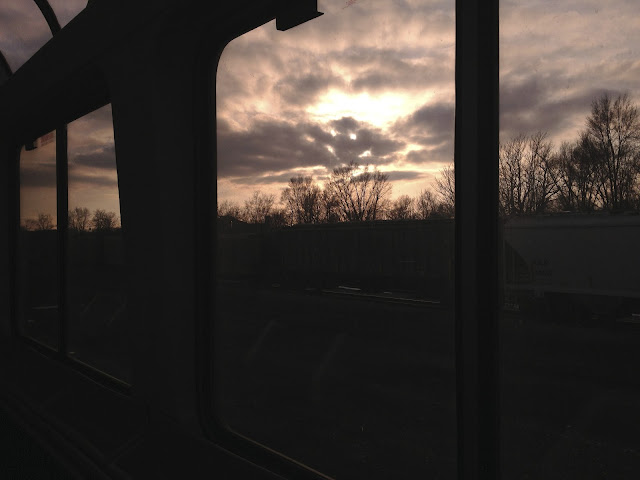 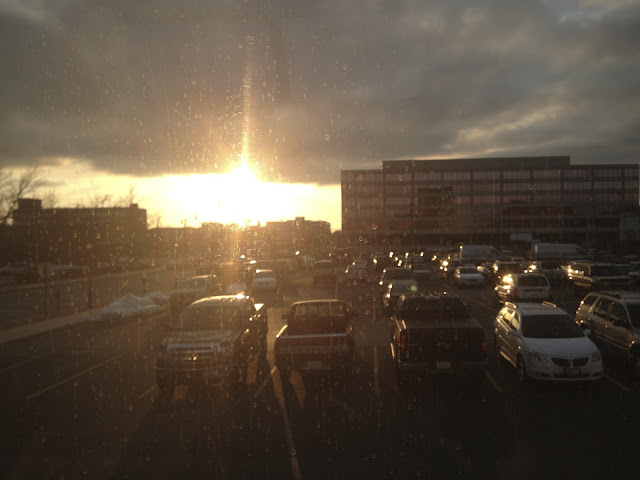 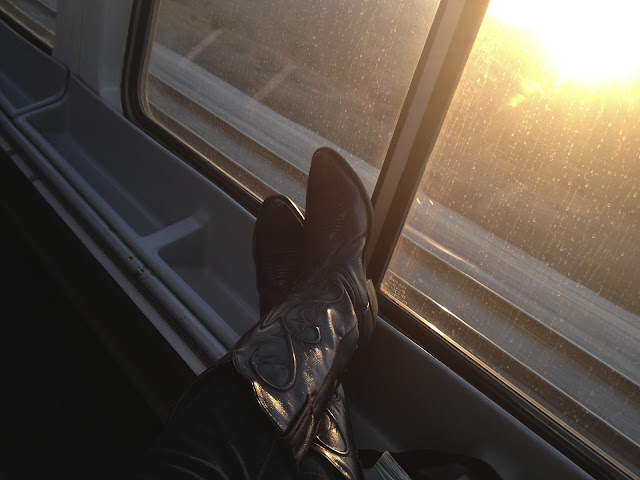 The train ended up being an hour or so late. By then, I was impatient. I wanted to be with my boyfriend, enjoying my dinner and a drink and planning our weekend of fun. But I was glad I picked the train, happy with my day of reading (and texting and instagramming and napping), happy to relax all the way to St. Louis, where I was retrieved from the train station and brought to a Bosnian restaurant serving Schnitzel and Spaetzle and Riesling, oh my. Delicious. And then we slept. 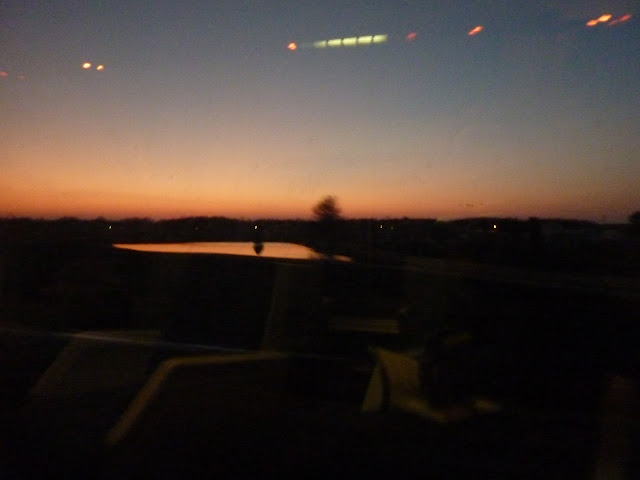 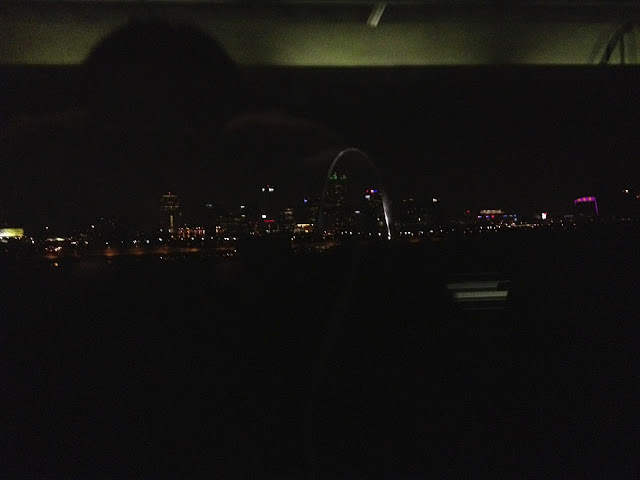 The Arch, poorly photographed from a moving train.
Posted by Marisa on Tuesday, April 23, 2013 No comments:

One lesson this blog has taught me, after writing it off and on and off again for almost five years now, is that I rarely want to write something if it doesn't flow fairly effortlessly onto the screen. (Which isn't to say that everything that writes itself is any good; in fact, most of it probably isn't.) Writing about an event or a feeling that happened in the past can feel forced. A post that requires too many photos can feel awkward, not only because importing the photos and laying them out properly in Blogger can be frustrating, but because when a post is governed by photos it can be hard to make it thick with words. I might try to pick the photos first for inspiration, only to find that they are obstacles to gentle transitions or they don't tell the story I wanted to tell. Travel posts are almost always recaps, and really should be full of pictures, so although this blog was created to chronicle my year abroad in Germany, there are many travel stories that I could have included, but haven't.

The photos probably aren't the real problem. It's a sort of laziness. Posts like this or this came out in one go. I guess they're kind of the same, though. Bedroom meditations, a hundred percent in the moment.

Getting myself to sit down and focus is nearly impossible. This post I'm currently writing—unlike the ten or so drafts and ideas I have waiting incomplete—felt like it would be one of those "effortless" ones, coming completely from the present. And yet I've reread more than ten old posts since opening this tab. I found this one, about free time. Free time and naps, planned and otherwise. Forming habits. Yoga. Writing with the distraction of the internet—except that post was written in TextEdit. It was from the first few months in my studio apartment, before my internet was installed. A year and a half ago, and yet I barely recall those months, when my complaints were lack of internet and lack of people. Now I suffer from too much internet and not enough (constructive or relaxing) free time. And so many computer headaches.

When I first lived alone, in that internet-less time, I got out Writing Down the Bones and started to reread it and practice writing on paper. I worked on focusing. I blogged about it. This past hour has reiterated to me how much I am a broken record, barely changing. I was trying, then. But I got distracted from my fight against distraction. This fall, I reread my journal entries from the previous fall, and I couldn't believe how much was the same.

What I'm trying to say is that I'm chasing after the feeling of total immersion. The reason I was okay with middle school was that the piles of books to read never ended. When I reread Lord of the Rings last year, I was totally in it. I was ready to dive in and reread The Silmarillion—I even brought it to a bar to read while Emma learned to salsa. (My attempt was ultimately unsuccessful; I think my bookmark is still stuck in the Ainulindalë.) I felt the same a year later, discussing the minutiae of Peter Jackson's first Hobbit film with anyone who was a worthy partner. I wish I read more books, fewer blog posts. There are so many books I want to read, and it wouldn't even take that long to read them, if I tried.

I would also like to be immersed in yoga class. A few times, I've felt in my body that I was better than the week before. I was content to be there from the fifth minute all the way through to the last (I still do have to settle in initially). But even then, when the movements feel natural and possible instead of just out of my reach, I start to think about what I should wear to work that night. I'll try to schedule the week while lying in savasana, instead of truly taking rest.

Here we are again. What am I trying to say? I hate being distracted. I think the invention of tabs instead of windows in internet browsers, and the option to save those tabs, can be viewed as a cruel act. I try to zip through all the blogs on my RSS reader so they're done, so I can move on to something more wholesome feeling (more wholesome even though I enjoy most of the blogs I subscribe to). Usually I don't move on to those better things.

Things that are good. Cooking a real dinner. Having a good conversation at a restaurant. Writing something I enjoy reading afterward.

Writing for school made me anxious because it was difficult. The deadlines. The topics. I didn't really care about what I was writing, even if I liked whatever I was analyzing. But that was worth it. Sketching the outline, then filling in the blanks. And editing. I have an aversion to editing. That's why this post is meandering. Every thought that comes to me, I follow, and here we are, all tangled up.

My boyfriend compulsively edits. He can't not edit. He says my openness makes me a better blogger. I'm not always sure.
Posted by Marisa on Wednesday, April 17, 2013 No comments: 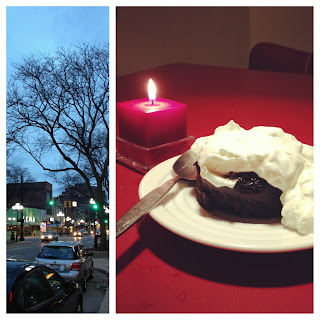 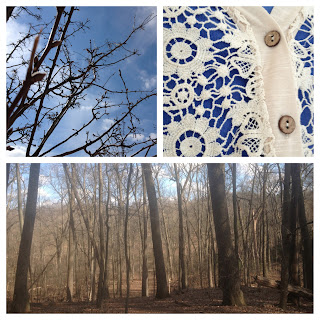 it was a good week*
because cooking (frozen pot pies made last week, baked mostaccioli, learning to cook catfish)
because I got sent home from work three hours early Sunday and baked tiny chocolate cakes
because sunshine and increasing temperature
because I saw a movie
because all my laundry is clean
because I decreased my shoebox collection by one
because I remembered to call my mom
because I went to yoga twice, for a grand total of 3.5 hours, and one of those classes was just me
because I went to the Y
because I got to wear my new springy sweater I bought with in January with Christmas money
because I get to wear other clothes I haven't in a while
because I cleaned my stove SO WELL
(but not the oven)
because we went out to brunch and to the farmer's market in the chilly sunshine Saturday
because I went to the Arb after work the following Sunday

**I need a new blog design. sans serif. not sure about this collage-nonsense, but in the interest of having a blog, I'm posting it without further consideration.
Posted by Marisa on Thursday, April 04, 2013 1 comment: