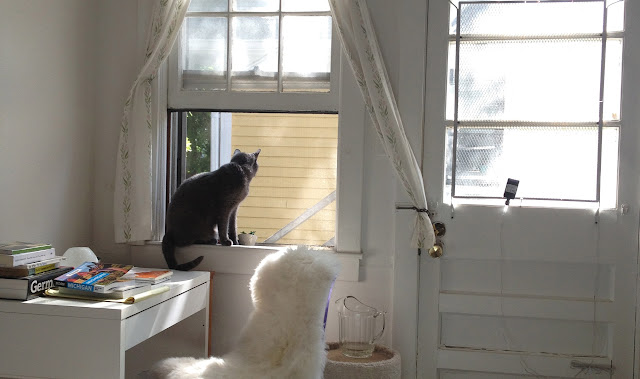 "What are you up to now?" a friend recently asked me one morning, when a group of us were hanging out, brought together by his re-emergence in America after a while away. I answered about my full-time job at the university, where I've been for just over twelve months now. I probably gave the shorthand answer about why it's a good job for now. I think that line of conversation ended about two minutes later, max. It's always an easy transition to where Cooper is going to go next, what sorts of jobs he's thinking about and whether or not we want to stay in Michigan.

Afterward, I realized that it wasn't the answer I wanted to give, and it wasn't the answer I had to give. No, a year later, I still haven't come up with a concrete plan for my next step, an end-goal or a career path I'm excited about. (I am excited about my first real raise a couple months ago,  and thrilled with how much money I've been able to save this past year.) But there's no reason talking about my job needs to be a fun conversation; it's a job. Going to an office and making money forty hours a week isn't the only thing I'm up to. It's not the only thing I do.

I reread Outlander books 4-6 this winter, then finally read 7 and 8 in the early spring. It was a glorious, intoxicating pursuit and I loved every minute of it. I read the third of Elena Ferrante's Neopolitan Novels in June, after long holding back, and was sucked into the anguish of being a woman in 1970s Italy, of being a poor worker anywhere in the world. Life is hard, guys.

I spent a few days reorganizing my Pinterest, and many more hours dreaming up new layouts for my apartment (although the quarters are too tight for any of them to really work), plotting new combinations of colors to give a new perspective and a brighter view. Cooper and I put together a garden of pots on our fire escape, and now every couple weeks we pluck a batch of basil and make pesto for dinner—just like that, pasta and chicken sandwiches and decadent egg sandwiches for breakfast. I spread out a mat between the plant pots sometimes and eat my dinner al fresco on the floor out there. Summer is glorious.

It's been some weeks on, other weeks off, but I've been running outdoors many mornings, as well as going to the Y. My goal is to feel the ache of exercise every time I get up from my desk at work—a vivid sense of satisfaction at my commitment to my health and my goals. It doesn't happen every day, but I think it's getting easier.

I've gotten so frustrated about the injustices so many people face in this country, even as the Supreme Court upheld the Affordable Care Act and legalized gay marriage across the country. The plight of the people and the planet is so serious; mass incarceration and violence and de facto segregation of neighborhoods and therefore schools and therefore life; and not enough money allocated to any of it, even if we really knew how to fix it. I've been reading articles about poverty and homelessness and student loans and money money money and the lack thereof, for years of course, but everything feels like it's coming to a head. I started to follow Bernie Sanders (and then Hillary Clinton) on Facebook; he was showing up on my feed every day because my friends kept liking his posts, and I read along, thinking, "Yes, yes, yes," so many of his succinct and successful messages on social media are things I agree with, but then I just don't even know. There are so many things that we should do as a community, a state, and a country, but in Michigan, the cards are stacked against us, and anyway, how could we ever do all these things?

So I've been up to reading, and attempting to write but never finishing anything. I've turned my creativity to my tiny garden and my home, and itched to do the same for my parents and my friends (alas that everyone has more important things to do and money doesn’t grow on trees). I've amassed my small fortune, increasing my savings with every raise, big or small, that comes my way, and I've despaired, again and again, over the state of our world.

But I've done my small part in my family circle. Ali and I reunited with Rachel in Florida; Cooper and I with Emma in New York. I drove my mom out to see her sister in Rochester, New York, the first time we'd made that trip in about four years. I helped my brother with a scholarship application, and then with the planning of the trip to Germany and the coordination with the host bakeries there, when everything seemed too big and too hard for him (I write emails for a living, although not usually auf Deutsch). The biggest victory in bettering someone's life is that I got my parents to sit down at the table with me, and put together a budget based on all of the past year's expenses, and then dig out the details on their separate retirement accounts and my dad’s small pension. Finally, my mom could see that the money was there, that they wouldn't have a lot, but it wasn't worth her working 'til she was eighty, or even until sixty-six. And so she's retiring in two weeks, at which point we'll all have to do our parts to get her working toward a healthier, more mobile life again. I hope, I insist, I decree, I demand.

I know it's not always the best topic of conversation for people who don't know everyone I do, but it turns out that the thing that matters most to me in life is my family and my friends (felines included). I thought all I wanted was to move away for college, and then when that didn’t happen, at least to move away after college, but despite the occasional regret, this is good. These people are my world. And so next time someone asks what I've been up to, after a year or two of little communication, I hope I say something more like this, and not my latest career update. It's just a little patch of who I am.

Labels: books, how should a person be, life updates, spring, summer 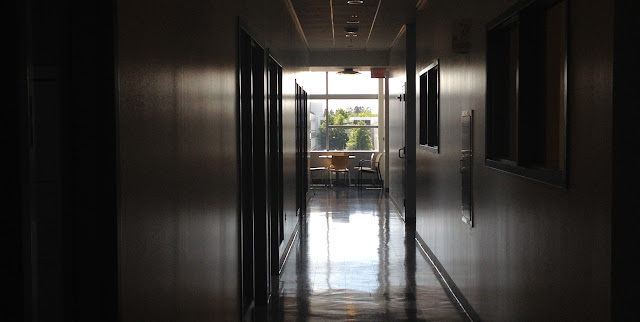 I've been in something of a funk at work these past two or three weeks—not quite busy enough to feel the pressure to succeed. None of the work feels big enough to be worth doing—or else it's too big, but unimportant, and not something I can completely do on my own. I don't like that.

Last week, part of it was PMS, and then yesterday my cramps were bad enough that I let myself stay home sick after lunch. But it's mainly the lingering feeling of worthlessness from the previous weeks, at this point. It seems to me that I've been doing a bad job, so I am a bad worker, so I will do a bad job, can I go home now?

I know that every day is a new day, every day I can start fresh and I can do a great job and cross off a lot of things, even in fewer than eight hours. But if I can fix it any day, why do it today? Why not wait until tomorrow? Self discipline is hard. Fewer hours day after day, and then you try to work long and diligently and it just feels neverending.

Instead I want to read about the Greek island of Milos, where Emma is right now, and maybe chronicle a little of last year's travels in Turkey. Emma wants to take a boat to Turkey, and make her way to Odessa from there. I want to find podcasts to listen to while I work. I want to read Testament of Youth—we saw the movie on Monday night and it was so good!—and also read about nature and cultivation and wilderness, like Cooper's always trying to get me to do for him. Even though it's not like we share a brain, and I'm not going to take notes for him.

I want to leave early so I can rent a kayak before they stop allowing the river journey for the evening, so we can practice for our trip to the UP. I want to watch old Daily Show episodes because we watched it last night, Amy Schumer and Ta-Nehisi Coates with possibly my favorite television person in the world, Jon Stewart, whose show I've barely ever watched between boyfriend number one and now. I'm sad that the era is ended (Jon Stewart, not bf#1), and I didn't even take part in most of it. And the same for Colbert, but that was already over.

When I sit in my new office at the NCRC (right now I'm three days at the old office, two days at the new one), I think of ways to decorate it, to make it welcoming, truly mine. The big window is great; I love it. But it's not enough, especially knowing that for half the year, the trees will be naked and the ground and sky grey. I have an entire shelf above my new desk there, that I'd like to fill with books and maybe a small lamp and other pretty things. But my job requires zero books. There is no reason for me to surround myself with any. What a sad reality. All I need to do my job is an internet connection and this horrible window into bureaucracy and email. Nothing real like a book. And yet I have to sit here every day.
Posted by Marisa on Wednesday, August 05, 2015 No comments: