Summer always used to be about water. The centerpiece of the summer would be a week on Lake Huron, supplemented by the constant pull of the city pool from Memorial Day to Labor Day. The importance of Up North was cemented by the time I was in first grade—I remember making a book entitled "Summer," in which I described each vacation from the time I was two, which in my understanding was the first summer my family had headed north with me. The previous summer had been the best, because my family had rented a mustardy yellow house directly on the lake, where we were joined first by one set of grandparents, then the other, and my oldest, silliest uncle. I can only remember the photographs now, and that I didn't understand why I needed sunscreen on my ears and neck when my brother, who had shorter hair (but darker skin), didn't, and that I think the water there tasted sort of funny, unless that was the summer before. I remember that my grandpa put a penny on the train track behind the cottage and then showed us how a train had flattened it, and we had dinner at a nearby German restaurant—I ate spätzle with just butter. I guess I do kind of remember that trip.

The summer before second grade, we spent a week in an Oscoda condo with my cousins and their son, two years younger than my brother, and probably my aunt and uncle. Over the years, they invited more cousins and their children, and our grandparents, and sometimes my parents, and we moved up in the world, to a private house (bigger than a cottage) with its own beach, and then both of the houses that shared that beach. The last two years, I had my own room in the "kids' house," where I read book after book in peace away from the boys, especially around noon when we weren't allowed to be outside.

I don't think I could really even approximate swimming until I was six or seven. When my parents subjected me to swimming lessons at our pool, I didn't pass level one, although I did learn to put my head under water and kick myself around, which was good enough for me until middle school made swimming a more public event. The summer after sixth grade, my cousins made their first blunder—they tried to switch us to Lake Michigan and Petoskey from the Au Sable River area. Instead of a private beach, we would have a bluff, and a drive to the beach. Worse than that, we'd been the victims of false advertising and broken promises, and the morning after we got there, we left the house with a farm on the bluff. We stopped at an aunt's and uncle's in Traverse City and tried to enjoy their smooth, rocky beach, but that was all the Great Lake we got that summer. It all fell apart after that. My cousins thought the Great Lakes were too big and cold for the little kids. We went to water parks and Lake Lansing, and I turned twelve and always got my period during vacation, and everything sucked. The last summer my brother and I were invited on the family vacation, I was fourteen, and we went to Higgins Lake. We had a dock, not a beach. You can see across Higgins Lake. I like depth. I like waves. I ran out of Robert Jordan books halfway through and the used bookstore there didn't have even one of his books.

There was one more idyllic summer. I was sixteen, Ali fifteen. Summer had begun to be about summer concerts and road trips with friends and my mom (we weren't the sort of kids to get our drivers' licenses or anything) and that summer's trip far up into Wisconsin had been great. Chelsea, Ali and I saw the week in Bayfield with their family as part two of our summer tour. We biked to get ice cream in town, and all around, and snuck down to the beach after everyone else was in bed. The next year, life got harder, and we had to head back to Michigan after a few days. Since then, I've only been on day trips to the Great Lakes. 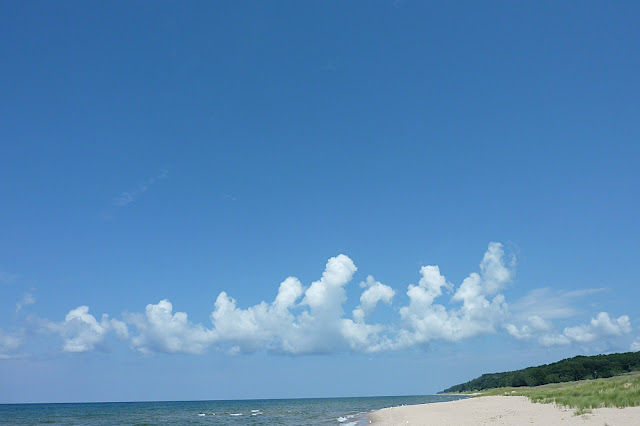 The state park beach in Muskegon (pictured above) was really nice, even if Ali and I were only there for a few hours at the end of July. However briefly, I did reach Lake Michigan, the number one destination on my list of places to go this year (which admittedly could have been more thoughtfully written to allow for greater successs—oh well). But I miss the way I used to enjoy the beach on vacation with my cousins: pancakes for breakfast, slather on the sunscreen, wait 20 minutes, run down to the water, hang out as far out in the lake as possible until I turned blue, dig "baby pools" with masterful irrigation systems with the help of my engineer uncle, swim, swim, swim, eat Bugles and Cheez-its, make s'mores on the beach. For a whole week. I think those weeks on Lake Huron were the best thing about my childhood, but they are no more.
Posted by Marisa on Monday, September 13, 2010