Best and Worst (Warning: My Life Is Mundane)

Last week, I finally finished sewing the curtains for my bedroom windows. It took a while because I had to cut the fabric—a nice, white, vintage cotton (bedspread? it was reeeeally long, but not symmetrical in all four directions like you'd expect a tablecloth to be) originally from Italy, hand-stitched together, with a handmade lace border on one end that's a great detail for curtains, that my aunt had had in her attic in Rochester, NY since an old Italian woman gave it to her—and that requires a clear table. I had to iron and pin the seams and hems, and I hate ironing and pinning. Then I had to sew it. But I finished, although I don't have thread in the right red to hem the grosgrain ribbon I'm using for the curtain tiebacks, and this was exciting, because I made something! Something pretty. And I could stop potentially flashing the pedestrians on the street three stories below. The streetlights still filter in, but at least there's that.

During the sewing process, I came across this little packet in the sewing machine's kit: 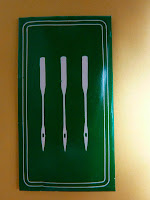 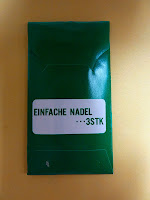 As it dawned on me that "3 STK" stood for "drei Stück" (3 pieces) because it said "einfache Nadel" (basic needle), I thought to myself, "This is the best thing I've seen today!"* Sometimes, it's just a nice feeling to know that some things aren't made in Asia. And the design of the little needle packet is simple but pleasing, and it's cool that it wasn't translated into English.

Now, the reason I was looking for extra sewing machine needles is that my theoretically higher-quality German needle did not withstand its meeting with a pin: 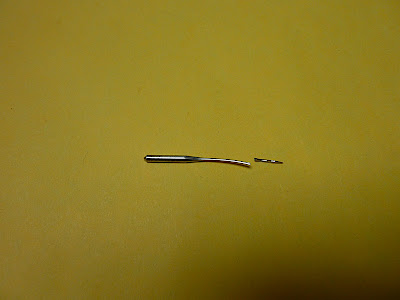 This broken needle unfortunately foreshadowed events that evening. I was biking to work, canvas bag hanging from the handlebar because the handles on the bag are too small to stay on a shoulder, and suddenly there was this loud horrible noise and my bike wasn't moving and RRRRIP and my bag was caught in the wheel. Okay. I took out the small things that could get lost, put them in my pockets, and hoped I wouldn't lose my glasses case through the gaping hole at the bottom of the bag.

I stopped at the bike racks by the restaurant and pulled out my bike lock, expecting the usual sight and sound of all my keys coming out with it because I never pull the bike lock key out when I unlock it. Nope. 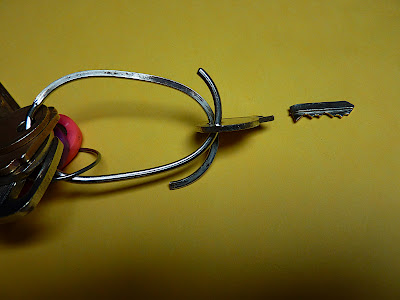 Instead, there was just a little stub of key sticking out. The head of the key was still attached to the errant keychain. Worst sight of the day. Look at how stretched out my (previously perfectly round, two circles thick) keyring got from getting caught in the bike wheel! Thank goodness my brother was walking down the street at just that moment, because he was able to lock my bike up in his building, and I rushed to work. The worst part was that my extra bike lock key met its death while loose in my pocket one day this spring. It folded just enough to crack. I had known the keys were low quality and had been meaning to get a copy made for months, but hadn't gotten around to it.

It turned out that the locksmith I went to the next day (Vogel! Another German word! Since 1913!) could make copies from the stub of key that had been stuck in the lock, so I didn't have to waste money on a new one. But seriously. That picture. My keyring is hilarious now. (No, it didn't occur to me to buy a new keyring while I was at a locksmith.)

The worst sight of today undoubtedly occurred while I was preparing broccoli to go with my lunch. I had three little pieces in the pan already and then accidentally lopped off a huge chunk. I picked up the chunk, preparing to cut it into smaller pieces, when I saw something wriggle. 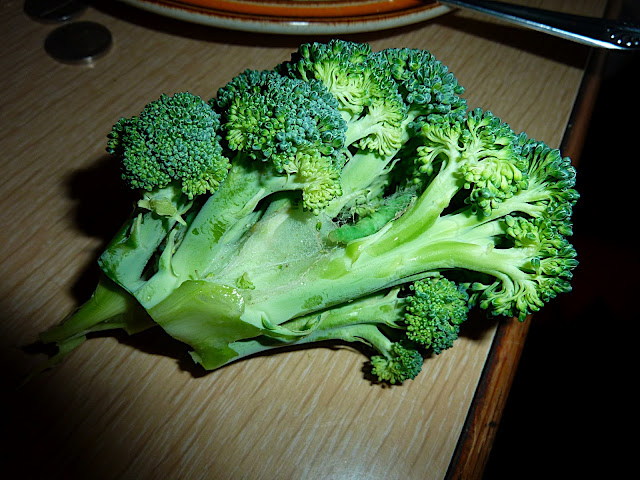 I don't have a problem with caterpillars, but I do have a problem with bugs in my food. I shrieked. The cats were perturbed. Upon closer inspection, I noticed there was a nasty, webby material in between the stems. I threw it all back in the bag and back into the fridge. (The fridge! Where it had been for a few days! Why were they alive?) When I got it out tonight to show Emma, I discovered there was a second caterpillar, half out of a cocoon-like structure. Don't they know they're supposed to come out as butterflies? And not in my broccoli. And not in the fridge. Ew.
This was nothing like Sunday's caterpillar experience. So cute, so fuzzy, so happily (until I used the flash to get his stripes) and appropriately on the ground on Belle Isle. He wasn't so safe either, being in the middle of the path, but I think he was doing all right. 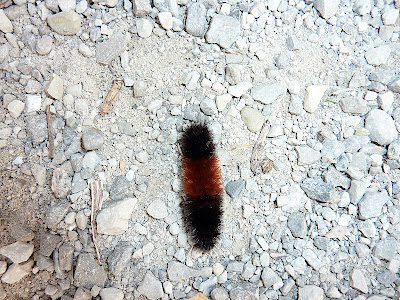 To round this out, let's end with the best sight of today. Emma and I made an expedition to IKEA and had a delightful lunch/dinner. I guess the scary broccoli was (meant to be) part of my lunch, and IKEA followed that and the FREE cupcake at the Cupcake Station, so IKEA was probably dinner. 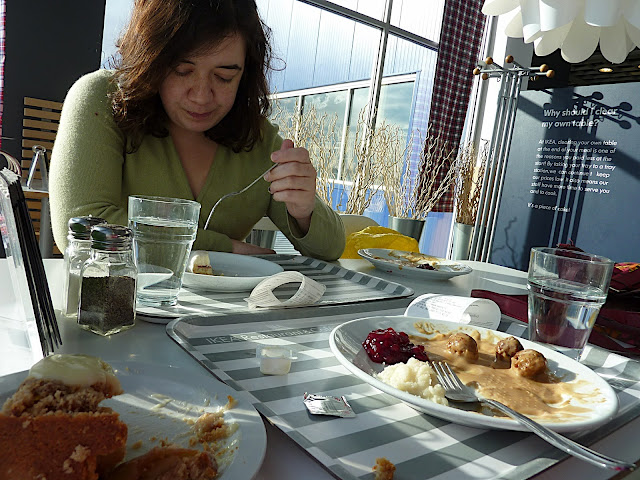 Look at that. Meatballs, mashed potatoes, apple cake—wait, didn't mean to give away that we got dessert after cupcakes, but there was a misleading buy one dessert, get one free deal so we couldn't help it also let's not talk about the 1 a.m. donuts in Ypsi last night—and beautiful sunlight through the huge windows. Sure, the view out of IKEA is never great, because it's bound to be a huge parking lot, but the clouds and the sun were pretty enough to temporarily make up for the commercial sprawl.
I think dinner might not have been the best sight. I think it might have been this: 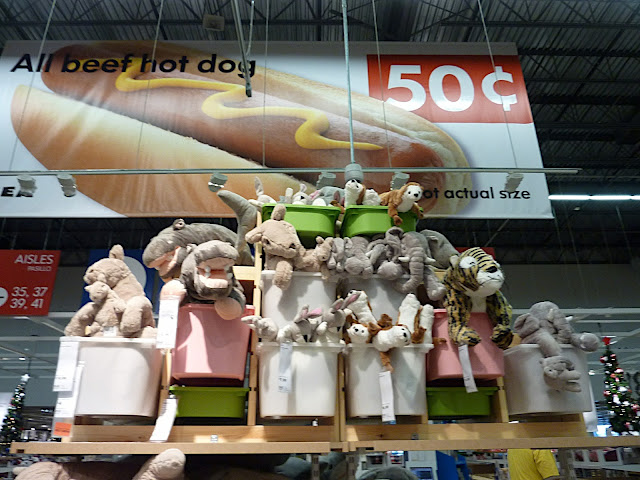 Stuffed animal mountain, yes. Customary giant hot dog ad, always funny (in a lame way). I love the elephants. Giant sharks, hilarious. But wait. Wait. Is that—? Could that be—? 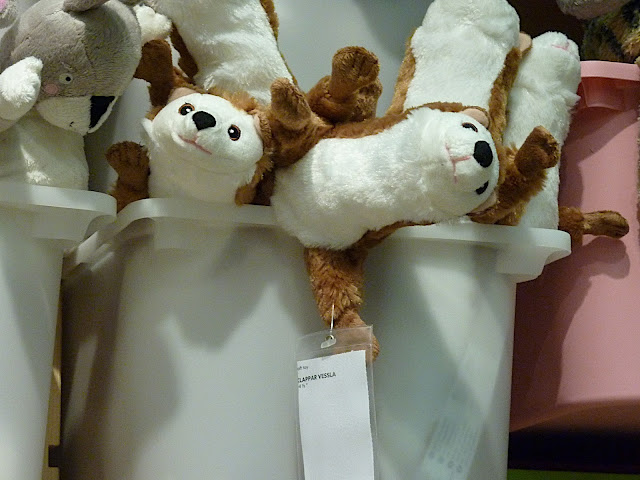 Weasels. Maybe ferrets. We considered stoats. But weasels is funniest. There's nothing not funny about a weasel. Just say it. Weasel.

I didn't buy one, no matter how funny, or how cheap stuffed animals at IKEA are. (The huge sharks are surprisingly affordable.) I do own an IKEA rat, because who buys a stuffed animal rat? My mom owns one too. We love them. But I didn't buy a weasel. I'm broke, remember? 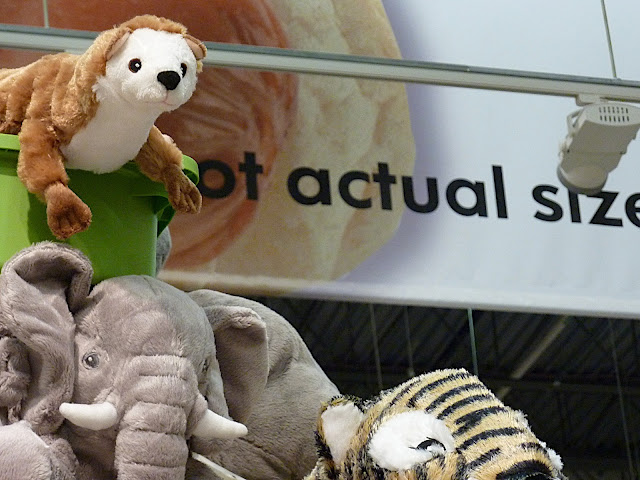 *You might think the paycheck I received that evening was better, but I'm not sure. Paying the bills isn't that exciting. It's just one of the basic things I require.
Posted by Marisa on Thursday, October 28, 2010

Be that as it may, our life is obviously populated by attractive greens.

What the size of the needles