“During the Cold War, the Reichstag—its cupola wrecked, its walls bullet-pocked—was an abandoned relic in the no man’s land of central Berlin, just inside the British sector. The Wall, built in 1961, ran a few steps from the back of the building.

I start to read this profile of Angela Merkel in The New Yorker, warm in my apartment in Michigan, colored lights twinkling on my Christmas tree in the corner. I feel comfortable with the historical introduction to Berlin that begins the article, though there’s a momentary twinge of shame at this self-satisfaction. This history that I’m familiar with is so basic, bare-bones, and I fear my knowledge doesn’t go much deeper, despite the B.A. I hold in German, despite the many walking tours I’ve been led on through that city, both literal and literary.

It’s strange to me how much I warm up inside when a topic dear to me comes up. But I feel rusty on Germany, not confident on the nuances of really anything that’s German, anymore—my convictions about living there, the people, the way things work, grow fuzzier with time. I know by rote the words I used to say, but the immediacy of experience is held hostage beyond the barrier of time. I don’t feel as though I can really back up my old impressions and rusty knowledge—I don't think I have enough left of those experiences to plunge deeper, think anew.

Reading the sentence, though—the wall, built in 1961, ran a few steps from the back of the building—I remember it. I took pictures from the Reichstag, standing in what used to be West Berlin, watching people walk along a path just outside that marks where the wall once separated West from East. 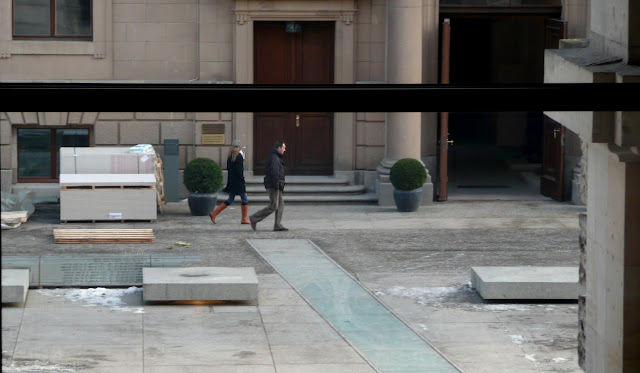 I think that Berlin in icy January was probably a fitting introduction. Black and white, the weather forbidding, even if nothing else was. Historical Berlin is so many things, but first and foremost it is bombs and Nazis and Russian soldiers; the Wall, Wim Wenders’ angels in heavy overcoats in a world of quiet poetry, but no color; and spies, inoffizielle Mitarbeiter, everywhere.

Berlin was cold; my classmates complained all through the long, long walk of history our guide led us on. Nazi buildings, Checkpoint Charlie, Geisterbahnhöfe—the ghost U-Bahn stations located on lines that didn’t stop on that side of the city, because it was on the wrong side of the wall. The tour was long and not the most compelling, but I overdressed, heavy Aran sweater under a wool coat, with leggings under jeans and thick wool socks in hiking boots, so it wasn’t so bad. 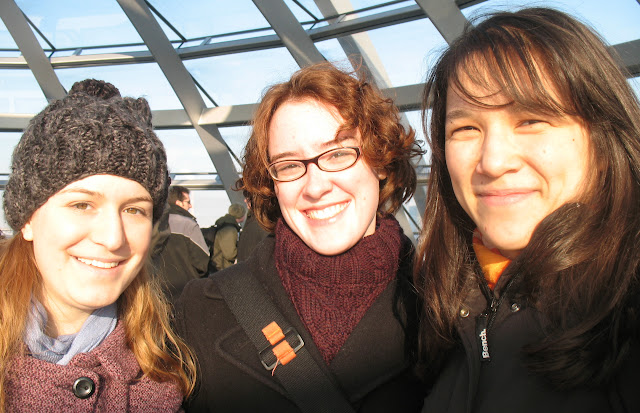 I have another picture out a Reichstag window, of the cobblestoned plaza that extended so far out ahead of the building, before reaching the great park, the Tiergarten. Cold stone, ice, and little people scattered about, some with cheery red accents. I used it to symbolize the brutal length of winter, but I loved the scene all the same.

When you travel, place after place, the intoxication wears off. After six months in Europe, sights sometimes just felt like old stuff—and while before, Very Old Stuff was exciting just for the fact of its age, after relentless journeying, the spark had been diluted, deactivated. But when I stood for the second time (seven months after the group trip to Berlin, it was summer) on Bebelplatz, the square where the Nazis burned books, and I read Heine’s prescient quote from the previous century, I shivered—and I shiver a little inside every time I think of it.

“Dort, wo man Bücher verbrennt, verbrennt man auch am Ende Menschen.”
“Where they burn books, so too will they burn human beings in the end.” 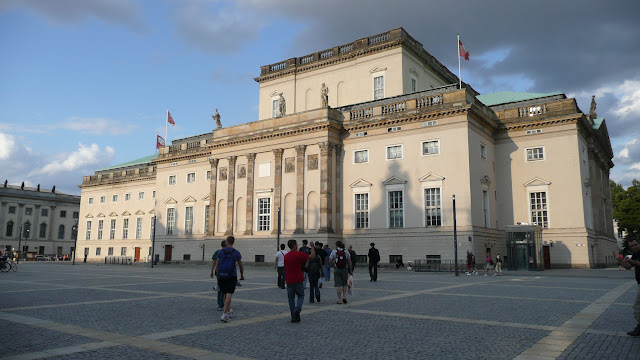 It’s sort of nuts to me that I’ve been so many places, and my parents haven’t. Because I also don’t think it’s so odd that I’ve traveled as much as I have—I know many others who have too, or who will surely surpass me by far. My parents had comparable educations to mine, but unlike me, they started adult life without debt, with employed summers and cheap tuition. They may have tottered on the path to gainful employment as I did, but they also went to Europe more than once.

More than once in one decade, then never again, although it wasn’t until the next decade that they started a family.

My mom has been places I haven’t—Arizona and England, Denmark and the Virgin Islands, Minnesota and many other states, I’m sure. My dad lived in Germany a little while, like I did, and together they moved to Indianapolis, before happily returning to Michigan for the rest of forever. All three of us have been to New York City, Munich, parts of California; two of us to Montreal (none of these trips with all three of us together).

I don’t think I’m going to stop. My life is already different than my parents’, and it will remain that way. But it’s still strange that I’ve stood on the D-Day beaches, I’ve gazed at the galleries of the Hagia Sophia and taken a ferry up the Bosphorous, seen Charlemagne’s throne, and stood on the western coast of Ireland, staring out across the Atlantic toward North America—and they have done none of these things. Never seen Paris?
Posted by Marisa on Tuesday, September 29, 2015