The business school's new building is something I think about almost every day. Or maybe five days a week—the five days I have class, always starting in the same building. I trudge up East U., turn onto Tappan and rush along past this building and the edge of the Law Quad and the historical library and under the Grad Library and then finally, I arrive at Mason Hall and curse the stairs I have to climb and the teachers that like to start one to two minutes ahead of time. I'm usually on time, but they don't seem to realize it. At the end of most days, I take the same path home again. 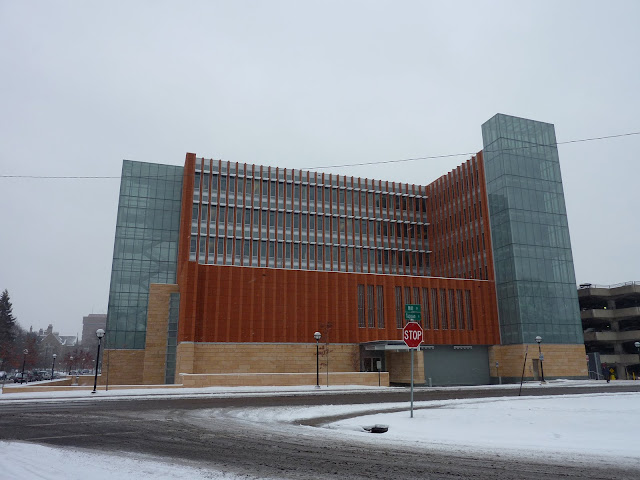 I think construction started when I still lived in East Quad, so I lived only one street away. The first time I remember really looking at the building, it was already clearly a building, and maybe tall already, and it was partially covered in this: 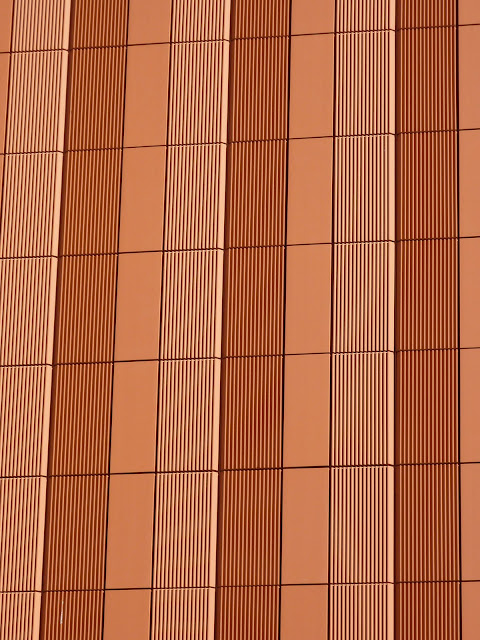 It was a stretch, but I hoped those orange tiles (described perhaps more accurately, and certainly more forgivingly, as 'terra cotta' on the website of those I hold accountable) were somehow a layer that would end up below the surface. Some weird insulation? Something. Not that there's anything automatically bad about them. I just don't like them. 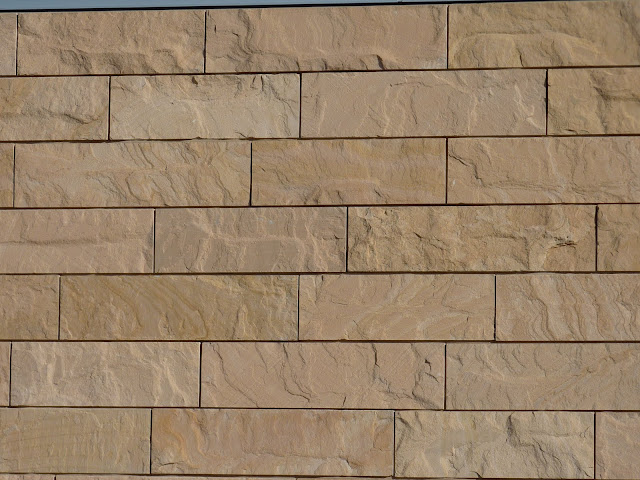 I knew it was too much to hope the same for the thin-looking tan stone that seemed so superficial and icky. 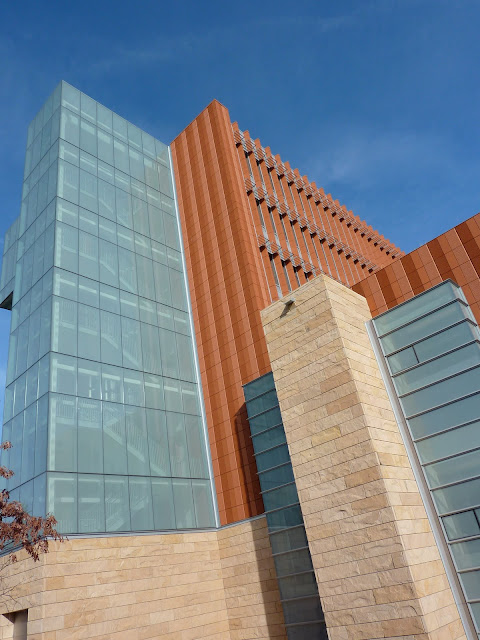 I don't know if it was the same day, but one day walking along Hill, Cooper and I considered the height of the glass stairwell. He thought maybe he should test his fear of heights up there. I remembered the trees that stretch out in from of you when you look out the windows on the upper floors of the Grad Library in autumn, or out from my cosmology classroom at the top of the USB freshman year, and figured it would be a pretty nice view. 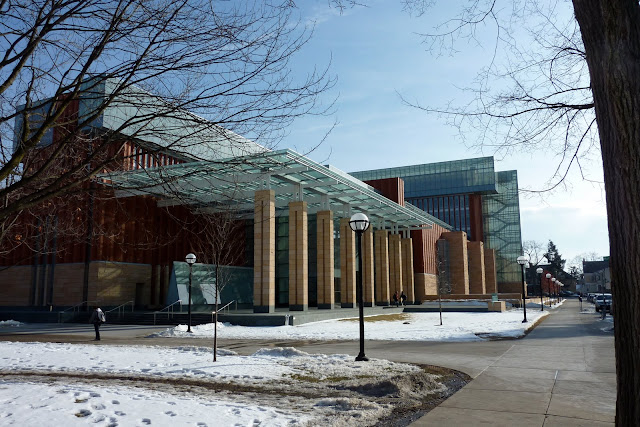 When I came home from Germany, the building was long finished. My instinctive dislike for it remained, but after a year filled with visits to the old towns of Europa, I had discovered a new appreciation for newer buildings, even the boring ones, as long as they weren't offensive. When we emerged from the U-Bahn tunnels at Potsdamer Platz last January on my first night in Berlin (which, by the way, was spent watching Twilight in the original English, because that's what big cities are for), an unexpected excitement poured into me when I saw skyscrapers. Real skyscrapers. Shiny and lit up and sparkly. There was one building that can be described as nothing other than pointy. (PriceWaterhouse Coopers on Potsdamer Platz, I guess.) I just couldn't get over its pointyness. Anyway. It was exciting. 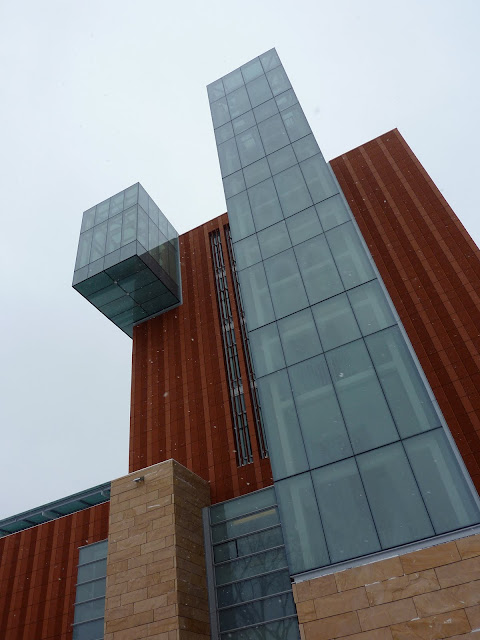 So, too, is the newest home of the U-M Ross School of Business. It has some weird shapes going on. And the glass! There's so much of it. I haven't ventured inside, but those classrooms must be full of natural light. Also full of over-the-top fancy equipment, I hear, but I guess that's what happens when you're funded by alumni who actually try to make money? When I see the glass, sometimes I flash to the distant future, with Ann Arbor in ruins. How does glass hold up to the test of time? Will there be jagged mountain ranges where pristine cyan prisms stand today? Will the building's glass limbs, the parts that make it what it is, even be there, or will it be a hulking orange beast gutted by some inexplicable disaster? (Human greed and nuclear war are usually the culprit in these scenarios, but who knows.) There's a part of me that knows the glass used in building is incredibly strong, but I can't help but think that it will break, or else slowly, over the course of millennia, ooze down to the ground and somehow disappear. If this is true, our ruins will have much larger conceptual holes than those of, say, Ireland. You can see how the stone churches dotting the Irish countryside would have worked. A glassless glass building would make no sense. 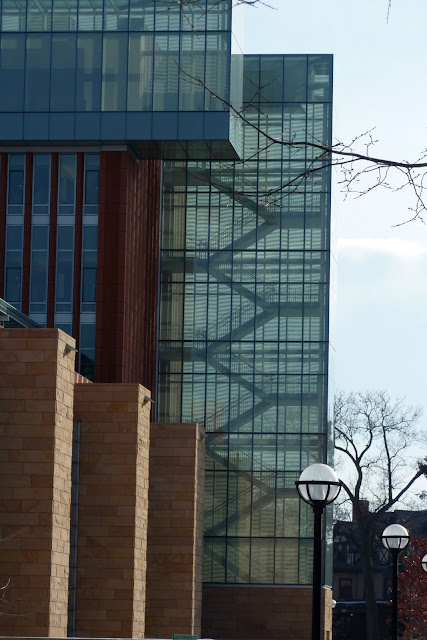 To avoid the tirade I'm about to go off on about how so many German buildings aren't really as old as they say they are and my parents' house is older than that building from the "fourteenth" century, or thinking about old buildings in general, I will leave you with my favorite parts of the B-School, the reasons I realized it was kind of nice after all. First, the stairs in the glass stairwell make a great design against the sky. You can even see people walking up and down them. 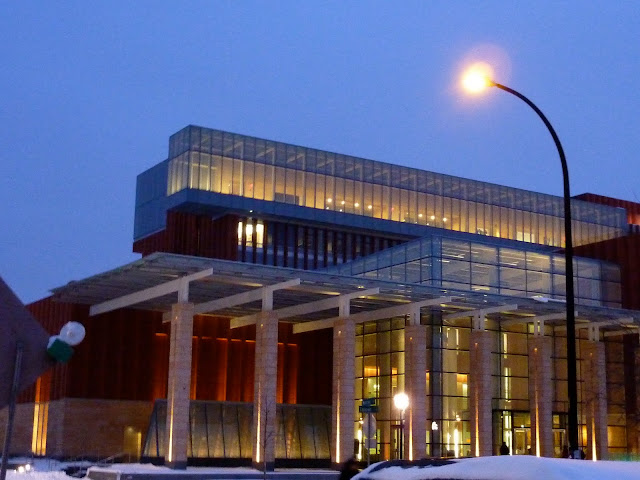 They look even better at dusk, as does the whole building. The interior becomes a warm yellow when the lights go on inside. Viewed against the darkening sky and through the glass, which keeps its greenish tinge, this cold, angular building becomes welcoming. It's definitely the best part of the walk home.
Posted by Marisa on Saturday, February 20, 2010

But I want to know why the buildings aren't as old as they say they are!!!!

Well, someday, that will happen.

You should go inside sometime.

But it's full of all those scary people who are trying to succeed and wear suits or else horrible sweatpants to class. Shoot, that's what I forgot to write about in this post. The huge discrepancy in what people wear and how neither is ideal, and the time a guy in a suit with a briefcase maybe crossed the street and a girl on the far side of the street yelled "Hey, sexy!" or "Sexy suit!" or something to him, and he looked sheepishly at me and then continued on to the building. Maybe it's not that good of a story, so it's okay it didn't make it into the post. But it's indicative of something, probably.