Disregarding the exhortation of the poem I translated and posted (Let's lead ourselves behind the light of the cold's written proof) and the homework assigned by my archaeology professor (Find someplace warmer than this), Emma, Cooper and I ventured significantly north for the first half of our vacation—to Montréal.

We drove the whole way, which was much cheaper for three people than the train would have been, and let me tell you, Ontario lasts pretty much forever. I don't know if it makes it seem longer or shorter that the majority of the rest stops heading west are closed temporarily, but it is a problem. (Today on the kitchen table I saw that Arizona just closed their rest stops period, which is horrible.)  This required us to bring the rotisserie chicken and baguettes we'd purchased at the Marché Jean-Talon in Montréal into a normal McDonald's to eat. We had no other option. 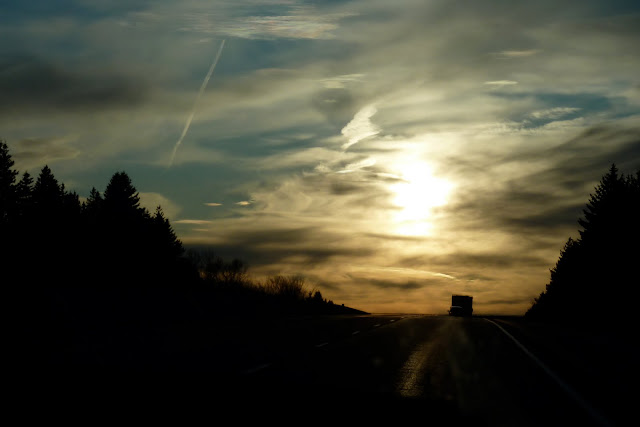 As we neared Toronto on the trip home, we drove into the sunset, which became ever more spectacular until it faded away...in time for Toronto's buildings to sparkle in the darkness. As we left Toronto behind, the blackness settled around us and the highway became much emptier. More than four hours later, the twinkling peaks of the Ambassador Bridge came into view in the distance. Soon we could see Detroit's skyline. Everyone knows Detroit is in trouble, but Emma and Cooper wondered if everyone knows Detroit is better than Windsor. The conclusion reached: most people probably don't know Windsor exists, which is probably a victory, but also probably not true. Then Emma complained again about all the British names in Ontario.

Windsor and the Ambassador Bridge from Detroit's Riverwalk, July 2008.

On I-75, the Lodge, I-94, the roads were so well lit, and I could switch to any lane I wanted in an instant. Leaving Montréal had taken an hour, probably, because of a mishap with lane changes in the crowded tunnel that takes you from downtown and QC-720 to QC-20 (which in turn takes you to the interminable 401 across Ontario). We ended up across a bridge instead of on the way back home and found ourselves turning around in the casino's parking structure. It wasn't the last time we found ourselves at a casino on the journey home, either.

In Detroit, we dropped Cooper off at Wayne State and headed home. Emma stuck the Avett Brothers in the CD player and we sang along as loud as we could, while I enjoyed knowing just how fast would be all right. In the middle lane on 94, there was a van/bus/thing, lights on, attached to a smaller vehicle behind it. The van's back wheels weren't touching the ground—it was not pulling, it was being pushed by the smaller car. How did they see? We laughed, but sped ahead to avoid the accident Emma was sure would happen. Then off the highway and onto Alter and I made all the lights but one, and the inevitable one after you've entered Grosse Pointe. In Grosse Pointe, I worried about the headlights behind me and wished I was going less than four miles above the speed limit. To get a ticket a block from home would be horrendous. But we made it back safely.

Where are the photos of Montréal, you might ask. Or more likely, you would ask it without the accent aigu: where are the photos of Montreal? When are you going to write about Montreal? Why did you put that accent on it even though you are not douchey enough to pronounce it en français while speaking English? The answer, my dear reader, is that I am too busy playing the Sims and worrying about life to go through all my photos right now. And I like to put accents on things, although I'm feeling a little awkward about this one. Most likely, you aren't even asking any of these questions, because you aren't reading my blog. Oh well. But Montreal, and Mont-Royal, and taking a trip were all great. Whoever you are (besides faithful reader, commenter, and kindred spirit Ali!), just wait.
Posted by Marisa on Thursday, March 04, 2010