What Kind of Person Do They Think I Am?

Last week, Emma walked into my bedroom and told me, "I've said it once and I'll say it again: you should really consider making marriage to a rich person your next career goal." She explained how, if this were my plan, I would have to devote my time to resting, perfecting my complexion, being cultured, etc. I guess I'd have to make time to practice piano and harp? It would be nice to have someone pay for me to watch foreign films. She went on to say that being qualified for jobs didn't seem to help too much in this economy, so I should follow a different path.

1. Question: Who gets married? Answer: An increasing number of people I am aware of, but still, not most almost-22-year-olds. NOT ME. I DO NOT GET MARRIED. And who gets married to rich people? Rich = old, probably, and we don't need to discuss this problem.

2. I don't actually know how to find rich people. If you do, pray tell, except I'm probably (as far as you know) not going to follow this advice, because I refuse to take this plan seriously. I have too much integrity (read: skepticism), and not enough initiative. Oh wait, on the internet. Ew.

3. Why do my friends make this sort of suggestion to me with such frightening regularity? (Any regularity is somewhat problematic.) 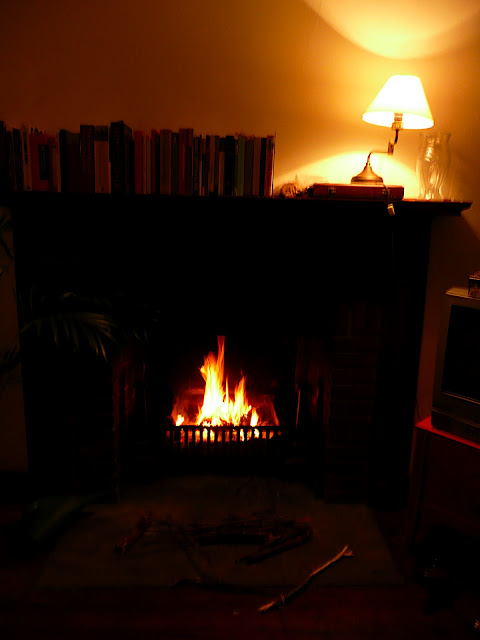 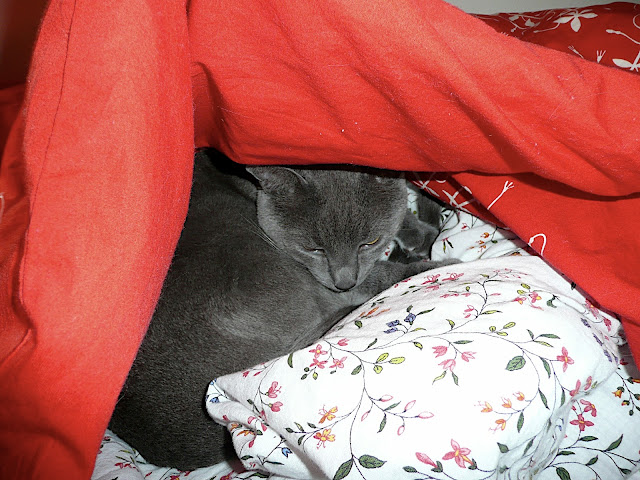 The summer before I went to Germany, I lived in a cute little house, albeit with awful tan-ish vinyl siding, with three of my best friends and a younger Table Cat, a Table Cat who took the initiative to curl up between my comforters and sleep on my legs regularly. Yes, plural comforters in May: it was cold. We called it the Krankenhaus ( = hospital, or sick house) because Ali and Cooper are always sick and I'm actually not that great, and...guests will think they're coming to get crunk, but instead they'll get KRANK! It's clearly one of the best jokes ever. Anyway, I was subletting a room in our dear Krankenhaus for the summer, intending to work—work enough to save money for Germany on top of paying rent, but if that wasn't an achievable goal, and it became clear fairly rapidly that it was not, at least to pay the rent and avoid the bottomless pit of despair that is moving back in with my parents. The summer of 2008 was notoriously bad for finding summer work, and I wasn't considered for any long-term jobs due to my imminent departure for Deutschland.

There was a period in my job search where I kind of...stopped. Nothing was working; what more was I supposed to do? I loaded the dishwasher and hung out in the yard with neighbor cats and read about German history. I used scholarship money meant for the year in Freiburg to pay my rent, then turned to my parents. One evening, we were sitting around and talking about how empty my life was. Now, to tell the truth, I wasn't so concerned about it being a little directionless, just about the lack of money (maybe I'm cut out for a life of indolent luxury). But Hegemonic Roommate the Male, to revive an old internet nickname, felt that my life was boring. He and Emma started brainstorming activities to fill my dreary days. 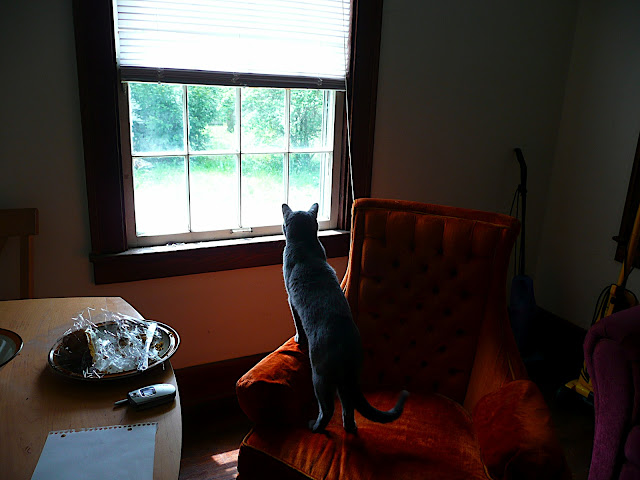 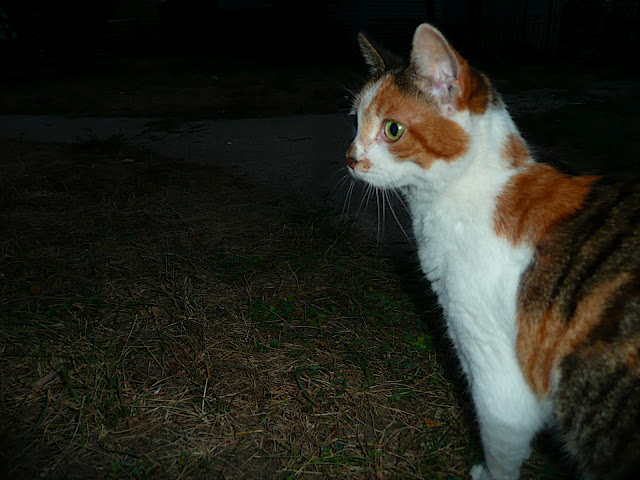 Above: Table Cat looks out the window, quite possibly at Yard Cat, pictured below.

Traditional employment was obviously not working out that well for me—although soon after, I got a job canvassing for a home improvement company, but how I went door-to-door harassing people for $8/hour and no gas money is a story for another time—so I'm pretty sure the obvious "You should be a stripper" proposal was thrown about. My response was probably an annoyed glare, or a sarcastic "Right..." They accepted that this was unthinkable for me, but surely I couldn't just sit in the house with the cat and reflect angstily on my life all summer. Everyone else had a job or was taking classes, but what was I doing to improve my lot in life? Besides checking out fifty percent of the Ann Arbor District Library's travel section and looking at the pictures occasionally. My metal-bodied laptop didn't even get internet in our house, because the hijacked wireless signals were too weak for it. 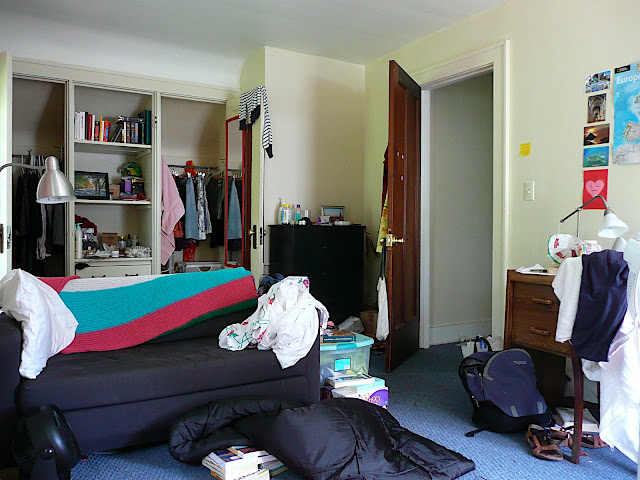 There are at least two piles of travel guides under that sleeping bag.

To make a long, wavering story short, they started telling me I should hang out in cafés and pick up guys. I was supposed to cultivate a mysterious, alluring persona: nice clothes, sunglasses, sipping my coffee—ew—and reading intriguing books. (I guess the Gossip Girl kick I was on for a brief period that summer probably would have been a secret to the café clientele.) And, you know, my computer would be able to pick up legal internet. This plan was not as innocent as it sounds, though. I'm pretty sure the idea was that these men I would pick up could at least partially fund my summer life. Maybe in a comparatively reasonable, yet still uncomfortable way; maybe in an exploitative, creepy way.

It sounded kind of fun, although Ann Arbor is not really the most exciting place, and it would be nice to read in more scenic locations, even if (or because) that would cut down on the impromptu naps I take in the sun, but I had one clear objection. As I mentioned in my last post, I was extremely stingy with my money for a while in college, especially since I failed to find summer work after freshman year, ditto for sophomore year, and then again the next summer, and that's how we got to this post. I guess. Anyway, the question was: how would I pay for all this coffee? How many days, weeks, months would it take to spark someone's interest, start up a friendship, find someone to pay my bills? To be fair, I might be exaggerating the exploitative part of this plan. Maybe it really was more about how safely bohemian a summer spent in the cafés of...Ann Arbor...would be. And expensive. 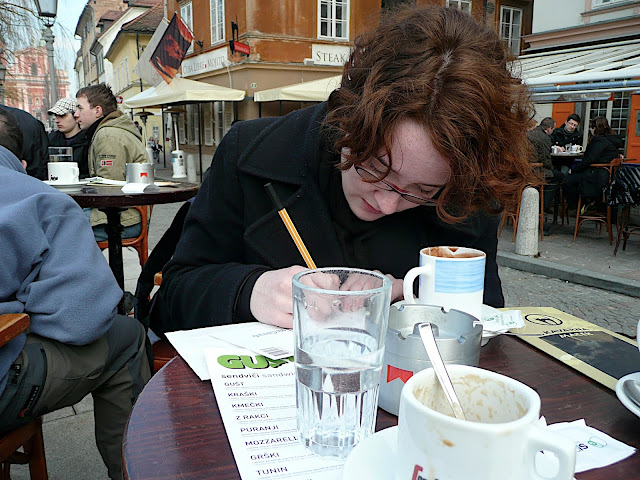 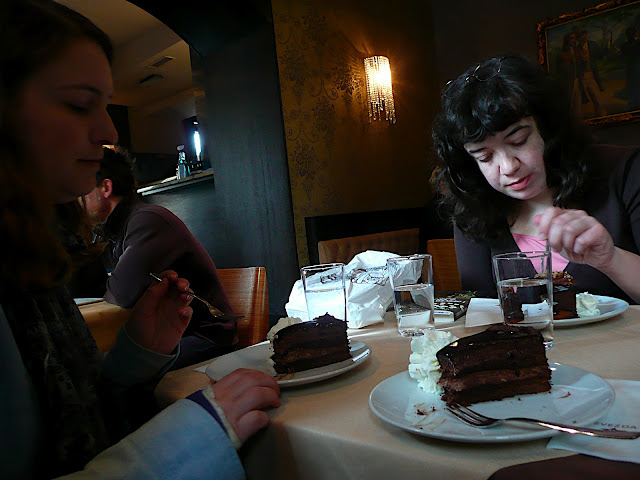 Too bad the cafés of Ann Arbor are not like these. (Ljubljana, Slovenia)

Hegemonic Roommate the Male said I could have his quarters to pay for my café-frequenting. He'd finance this new lifestyle with his loose change. For some reason, I didn't take him up on it. And then I quit canvassing and took intensive Spanish so I could pay my rent with university grants and federal loans. How romantic.
Posted by Marisa on Saturday, March 20, 2010

I think this is my favorite post! I like your pictures (yay Ljubljana). And I miss the Krankenhaus. =/
That's bizarre about the underlined words, though.