I Do Remember This Exists

The current soundtrack for finals is Mamma Mia. The light through my somewhat northwest-facing windows has faded as the sun sets, but I finally documented my beloved bedroom. In Emma's wester-facing room, there are still parallelograms of warm light across her floor and Table Cat.

The point I'm trying to make is that I took some magical photos in her room, but I kept doing so until my battery died, so I can't post them right now. So that's something else for you to look forward to when I finish finals. Right up there with posts about the trip to Montreal back in early March.

Two to three days stand between me and the end of my undergraduate career. It all depends on when I finish this last paper, worth only fifty percent of my Literature of the Turks grade. I was at a translation conference here in Ann Arbor this weekend. That is something else that happened. I want to buy silver sequined high heels. Table Cat is a purebred, the vet told us today. 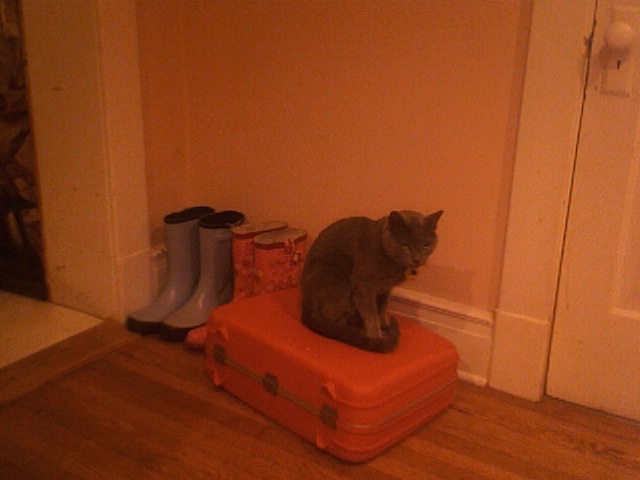 In case you forgot who Table Cat was, here he is sitting on Caitlin's suitcase, symbolizing our current transitional state—on Saturday, none of us live here anymore. It was taken last night, before his pure blood status was determined by the vet. Table Cat has a misplaced heart, a sure sign of a Russian Blue. (But a perfectly healthy heart, don't worry.) And he is apparently the nicest Russian Blue ever. Excuse me, "unusually nice for his breed." Usually, I guess they're pretty resistant to vets, not like our lovable, compliant Table Cat. Who spends half the day moaning and whining and will only succumb to loving in private, on his own terms. I do not want to meet any other Russian Blues if Table Cat is a nice one. (This is not to say that I don't love Table Cat dearly. He's nice to me most of the time.)

A couple weeks ago, Emma and I added a suffix to Table Cat's name: he is now Table Cat Porphyrogenitos, Table Cat Born-in-the-Purple...that is to say, imperial in the Byzantine sense of the word. That's as imperial as it gets. In light of the recent evidence, I guess we were right about his high standing. Also, his Byzantine identity perhaps explains the frequent battles between Table Cat and Haroun, whose namesake is, after all, Harun al-Rashid, caliph in the golden age of Baghdad. A caliphate, like an empire in the Roman/Byzantine sense of the word, is universal. There is only one caliph, as there is or should only be one emperor (tell that to the Fatimids in Egypt and the Ummayads all the way out in al-Andalus, or the Holy Roman Emperor). Anyway, it causes conflicts to have two universal rulers in one moderately-sized house on Packard. To be fair, though, neither of them know about history.

Emma and I have a Byzantine history exam in two short days. If only this sort of essay would get me an A. I would draw parallels to the cats all day if it would get me an A. I also could have written an essay about the melancholy aspects of Table Cat's life for my German test, but even though I could have connected it to Rilke's poem "Der Panther," which is about a panther who no longer sees the outside world through the bars of his cage and has essentially stopped living, I didn't think that would help my grade. Plus I already wrote a short story about a Table Cat-panther combination for that class.

In summary: finals are horrible, Table Cat has better blood but is also probably healthier than you, and I still exist.
Posted by Marisa on Monday, April 26, 2010

This is the best line ever.

"Anyway, it causes conflicts to have two universal rulers in one moderately-sized house on Packard. To be fair, though, neither of them know about history."

You are too amusing some times.

Ewww Haroun is licking my foot right now. Poor him, so dumb.