So last night, when I could have been blogging and SHOULD have been getting ready for bed, I decided to move one of the couches a little bit to test out a new idea I had—a new idea involving diagonals. I was pretty sure it wouldn't pass muster with Cooper, but I wanted to see. The big couch barely fit there, but shifting it did change the shape of the room, breaking free of the tyranny of not enough space and too many doors, which had forced us to line up every piece of furniture along the perimeter of the living room (and in the bedroom, too). 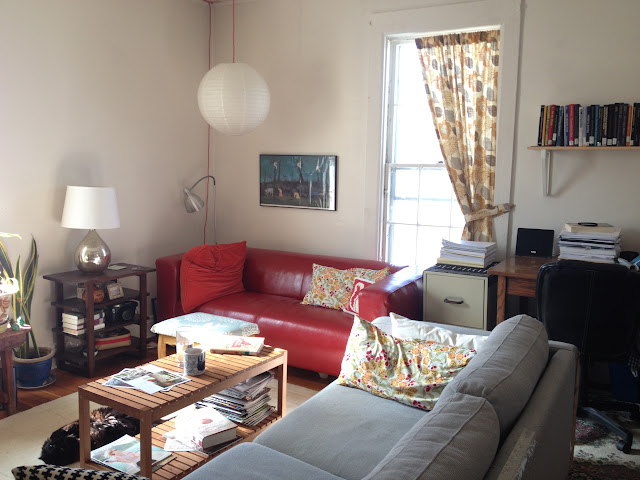 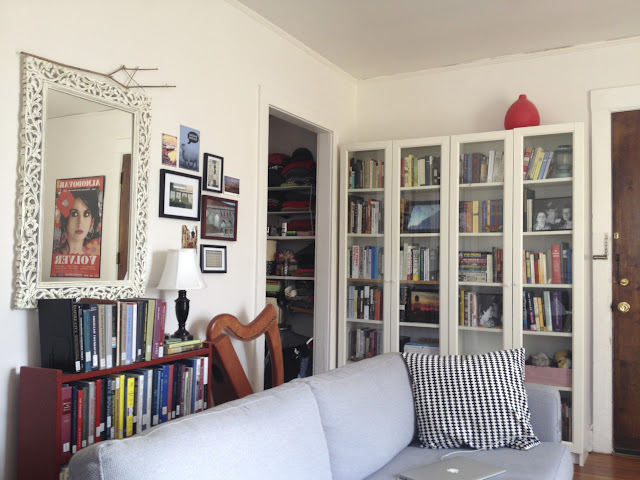 A simple solution is to just get rid of some stuff, so things don't feel so tight. On the one hand, I'm not as in love with my red leather couch as I once was, but on the other, I like having two couches with room for five people, since I still harbor fantasies of having friends over and I like to have a cozy place to hang out with them if it ever happens again. So fallen from grace or not (it's an insistent red that wants to dictate every other element of design; it's holding me back!), we keep the couch, because now is not the time for a new one, and two armchairs instead of a new couch would also certainly cost too much. I can't say the red Klippan sparks any joy anymore, but it seems I'm just not ready, and not rich enough, to fully accept Marie Kondo's tantalizing prescripts and throw it away. Instead, I succumb to logic and stubbornly and reluctantly hold on to this couch that still functions, dammit, even if its existence pisses me off once a week.

But maybe, in partial acceptance of the reality of our social lives, we can turn that red loveseat that Cooper and I rarely sit on away from the TV—since we almost never manage to have people over, the likelihood of a group movie night has plummeted to zero, and we like to share one couch together—which opens up one...or maybe even two! possibilities in this tight space. Because, you see, the diagonals really didn't work. Diagonal one was promising, but couch number two on an angle leaves a super weird open triangle of room behind it, which couch one (the only couch we ever use) has to stare at. So instead, I moved the big couch farther, ninety degrees from its customary position, and put the TV in a much weirder place so that the grey couch sitters (two humans, two cats) could still see the screen, and...I don't know. 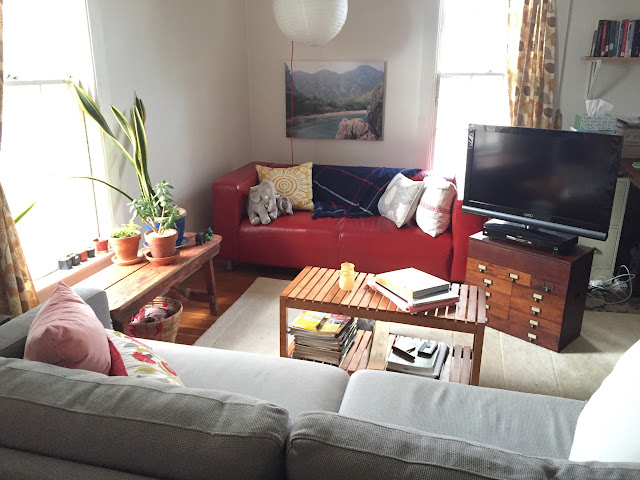 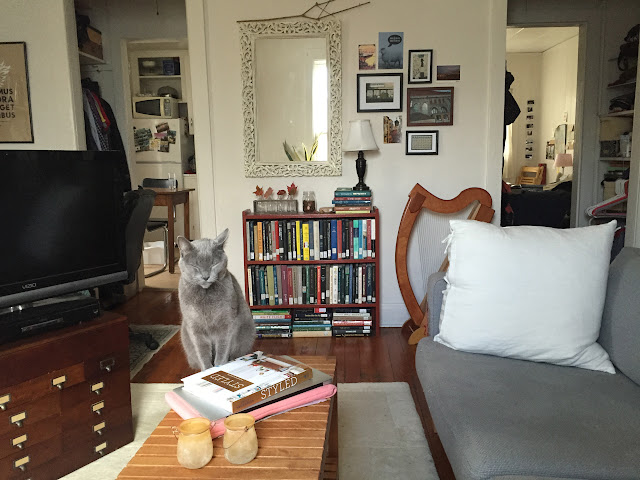 I affected change! It's kinda cozy! Whether we try out the new layout or return to the old, we need a bigger living room rug. And the lighting is currently bad in this new arrangement, there's still an awkward useless corner next to the front door where junk will probably accumulate, and not a definite spot to add in an armchair (long cherished dream; ignore what I said about already having too much furniture).

Jury's out, and so's my confidence.

If you come back tomorrow, maybe there'll be photos. If it's sunny and I can get a good one. But that would take the surprise away from Cooper, who doesn't return from California until Sunday night...so, we'll see.