The Plus Side of Winter 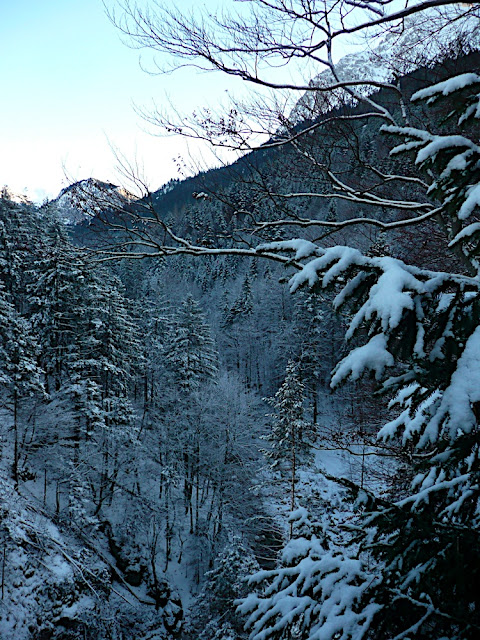 Although the mountain country of North Carolina in the eighteenth century is a whole different world than this one in which we live, there are elements to aspire to. I give you Drums of Autumn, book four of Diana Gabaldon's Outlander series, which is sprinkled with beautiful scenes and feelings of homeyness:

The winter held off for some time, but snow began to fall in the night on November 28, and we woke to find the world transformed. Every needle on the great blue spruce behind the cabin was frosted, and ragged fringes of ice dripped from the tangle of wild raspberry canes.

The snow wasn’t deep, but its coming changed the shape of daily life. I no longer foraged during the day, save for short trips to the stream for water, and for lingering bits of green cress salvaged from the icy slush along the banks. Jamie and Ian ceased their work of log felling and field clearing, and turned to roof shingling. The winter drew in on us, and we in turn withdrew from the cold, turning inward.

We had no candles; only grease lamps and rushlights, and the light of the fire that burned constantly on the hearth, blackening the roof beams. We therefore rose at first light, and lay down after supper, in the same rhythm as the creatures of the forest around us.

We had no sheep yet, and thus no wool to card or spin, no cloth to weave or dye. We had no beehives yet, and thus no wax to boil, no candles to dip. There was no stock to care for, save the horses and mules and the piglet, who had grown considerably in both size and irascibility, and in consequence been exiled to a private compartment in the corner of the crude stable Jamie had built—this itself no more than a large open-fronted shelter with a branch-covered roof. [...]

With few chores to do outside, there was time to talk, to tell stores, and to dream. Between the useful objects like spoons and bowls, Jamie took time to carve the pieces of a wooden chess set, and spent a good deal of his time trying to inveigle me or Ian into playing with him.

Ian and Rollo, who both suffered badly from cabin fever, took to visiting Anna Ooka frequently, sometimes going on extended hunting trips with the young men from the village, who were pleased to have the benefit of his and Rollo’s company.

“The lad speaks the Indian tongue a great deal better than he does Greek or Latin,” Jamie observed with some dourness, watching Ian exchanging cordial insults with an Indian companion as they left on one such excursion.

“Well, if Marcus Aurelius had written about tracking porcupines, I expect he’d have found a more eager audience,” I replied soothingly.

Dearly as I loved Ian, I was myself not displeased by his frequent absence. There were definitely times when three was a crowd.

There is nothing more delightful in life than a feather bed and an open fire—except a feather bed with a warm and tender lover in it. When Ian was gone, we would not trouble with rushlights but would go to bed with the dark, and lie curled together in shared warmth, talking late into the night, laughing and telling stories, sharing our pasts, planning our future, and somewhere in the midst of the talking, pausing to enjoy the wordless pleasures of the present. (Pages 380-383)

Photo: Snowy evergreens in Bavaria, on a visit to Schloß Neuschwanstein in 2008.
Posted by Marisa on Wednesday, November 04, 2015