Loose Ends (This is the post that never ends)

So, I graduated from the University of Michigan. With my German B.A. It was not a surprise. That was on the first of May. More of a surprise was that I got up at six in the morning that day, after going to bed around three. Why did I go to bed so late when I knew I had to get up so early, you ask? Well, our house wasn't exactly pristine on May 1st, when the lease was most certainly up. I kept nervously sweeping and facing the piles of rejected food left everywhere and then darting outside and calling out in my embarrassing high-pitched voice, "Here kitty-kitty-kitty. Heeeere kitty-kitty-kitty. Harouuun. Ha-rouuuuun." 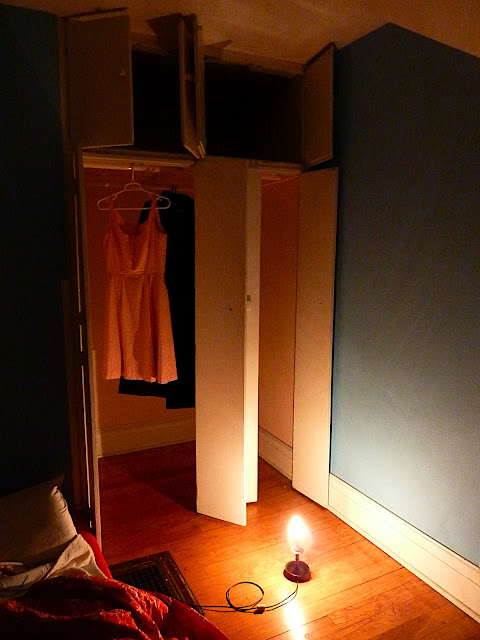 My room the night before graduation. Yes, the thing hovering Nazgul-like behind my cute pink dress is the graduation gown.

Yes. The certainly not street-savvy not-quite-kitten escaped the night before we moved out. It had happened the previous night as well, and only housemate Bacchus (let's just leave his name at that) and I were concerned enough to go on a walk around the neighborhood foolishly shaking cat food and calling out to a not visibly present animal in front of the drunk people populating the lawns of Packard and environs. Haroun stuck around the house, we realized, but it was too dark to be sure he was there until he would come up to the door and think about going inside. At the first sight of us, he'd dart away. Eventually we lured him in with food and an open door, but he wouldn't come until we hid ourselves, and he was able to run past and upstairs without facing the shame. What shame? I don't know. He seemed somewhat crazed.

Anyway, that was stressful both times, on top of moving out and junk everywhere and emotional trauma due to leaving a way of life behind, abandoning my home, you know. And then: let's wake up at six a.m. because we need to get in line at the stadium early because maybe security will be awful because THE PRESIDENT OF THE UNITED STATES IS GIVING THE COMMENCEMENT ADDRESS. As I said before, this unlikely eventuality was the only reason I was going to the big graduation. So, dark and early, we got up. And the thunder was crashing outside and the lightning was hard to miss. My parents were already on the road—I was impressed because this is unheard of in my family—and they told me the weather forecast was not good. But it worked out. My leather sandals may have been soaked for the zillionth time, and gotten a bit muddier than I'd like, and my hair was awfully frizzy for the photo(s) and really ever since—but even though even camera cases were not allowed, I managed to not break my camera, and Obama didn't get rained out. I was too short to actually see him, unfortunately, but maybe that's a detail I should edit out of my memory. 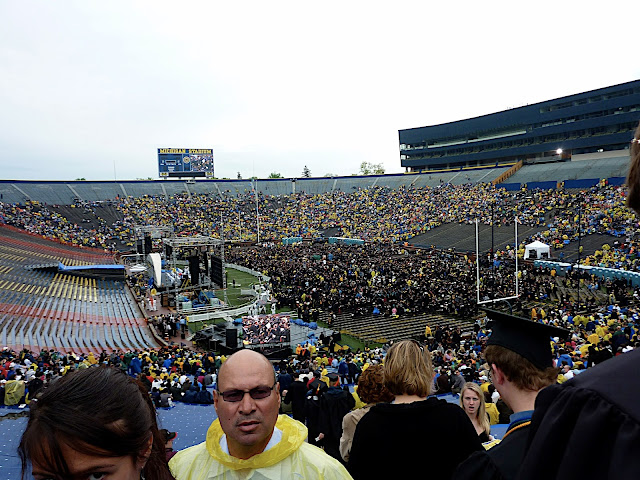 I regret that I was too tired and on zombie-mode by the time we sat in our seats on the field to have realized I should ask someone to take a picture of me at graduation. I have pictures of friends, and strangers. Thousands and thousands of strangers. Graduation, part one did not feel like graduation. It felt like a hassle and a spectacle, albeit one where the president gave a good speech. I'm glad I went. But the real graduation was the Residential College graduation in the afternoon. There were moments where I thought about crying, because ends are sad and there were so many people who matter. I didn't cry until later, though. 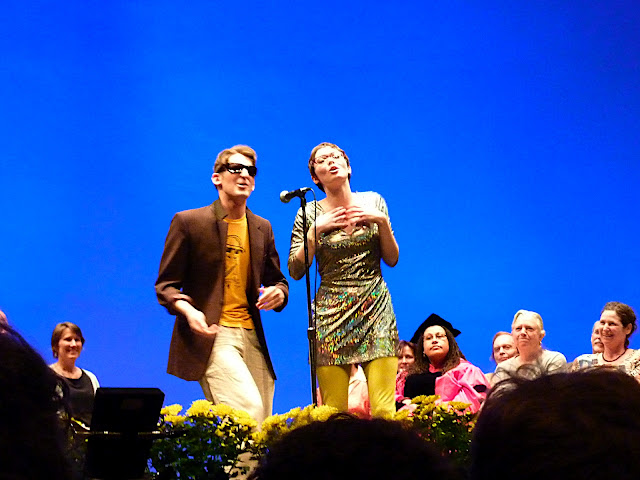 The RC is a fun time, as is its graduation.

So the thing with the RC graduation—for all you readers who don't actually super know me, whose existence I doubt—is that, as our Director Charlie Bright said repeatedly, the graduates are the speakers. We each had up to a minute to say or do whatever we wanted in front of our fellow RC graduates, friends, and family. The guidelines were to entertain, and to probably wear clothes. As I alluded to without explaining two posts back, I didn't know what I would say. I did know I wanted to say something, because all too often, I say nothing, and I didn't want to finish the RC off with nothing to say. In the end, I came up with something while sitting in the audience, something that I thought was relevant but also formulated in a funny way. And that was really all I wanted. It turned out that my earlier blog post was something of a spoiler for what I said, although I framed it differently. Normally I have great stage presence, so I hope I pulled that off, but it was kind of a blur so I don't know. Everyone thinks I'm shy, and I am, but I like microphones and stages and speaking loudly. But not impromptu.

I had thought I was going to be teaching English in Austria next year, but this week, I found out that my application never actually made it there. So I have no idea what I'm doing, which reminded me of a quote I liked back in high school, back when I was sort of a crazy fan girl. It's funny for two reasons: the person who said it, and then the way it is said. But I like it. In 2005, John Mayer wrote that "Being lost is sexy."

I thought about explaining the context and making it more meaningful—Garden State is what made him think of this, and life is boring when you're not looking for something, so let's all look for things—but I thought I would rather go with funny. Plus I hadn't had time to practice it out loud at all, so short was better. I also thought about prefacing it with how I love German and the RC German program and things, but that seemed boring. Anyway, I think it went well, and it was fine, but then at the reception after the fun RC parade across campus back to East Quad, one of my German teachers came to talk to me. I hadn't been sure she was there, and before the graduation I hadn't told her or even my parents that I knew the Austria-verdict, but when she came up to me and asked about it, that's when the tears finally came. 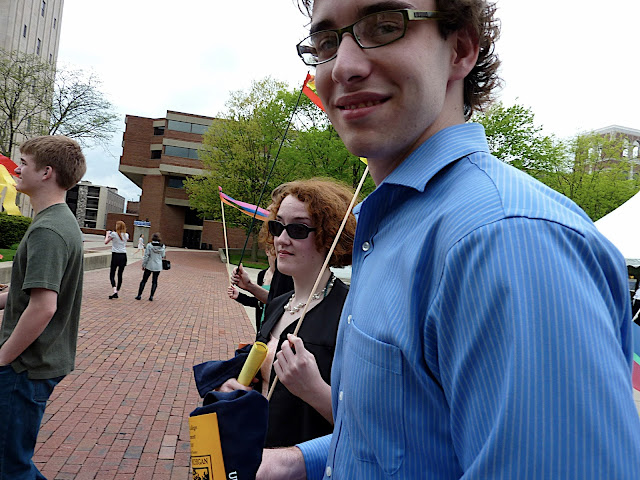 The parade—the only photo evidence I have of me. With my brother! What faces.

I really did want to tie up all the loose ends in this post, so in the future I can get on with things, but it's late and I'm heading to southern Ohio bright and early tomorrow morning. So, know this: I did buy the silver-sequined heels I mentioned earlier, but photographic evidence currently does not exist. Follow up is required. I didn't wear them to graduation. Tripping on stage would've been too embarrassing. After a couple extra days, the house did get clean and completely moved out of. Haroun ran away a few days later when Emma was really moving her stuff back to her parents', and we were starting to despair when several days after that, we found him meowing under a back porch a street away from where he'd gone missing. 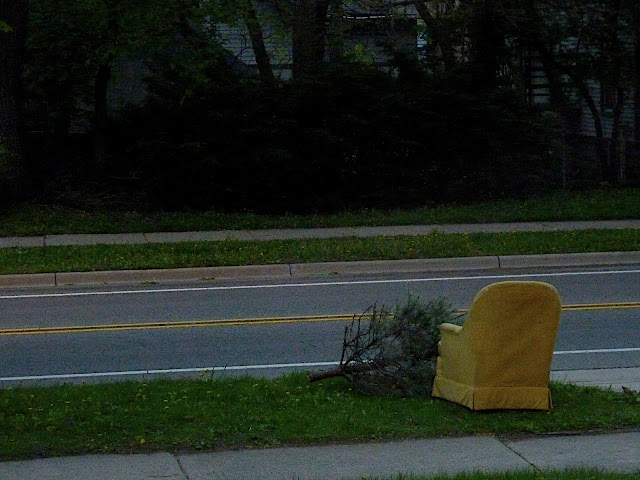 We even gave away the beloved comfy-maybe-moldy chair. (At least it found a new home before the rain came.)  And finally tossed our Christmas tree...

More loose ends, some tied up, some not: late last night I did the eCheck to pay the university the $2.52 I owed them for extra printing. Serious business. Now I think I will actually receive my diploma. But: most of my belongings are still not unpacked.
Posted by Marisa on Thursday, May 20, 2010