Let's End the Month on a Somber Note

But not a sombre one. For some reason I really wanted to type it like that.

So I keep thinking about the Anne books, which I am rereading after more than a decade (aaahhh, time), and how a certain storyline and accompanying lesson recurs throughout: don't be too stubborn, don't let a quarrel get in the way of your happiness, don't become estranged from your lover and doom yourself to some degree of loneliness (being an old maid) or at least years of unhappy separation before eventual reconciliation. There are so many people that do this in these books. Many of them are too proud to admit they were wrong. Some are too scared to admit the other is right, and they are in love. All situations are stressful, and in such concentration, alarming.

Then you read about L.M. Montgomery's life and realize she was probably thinking about one or two of her beaus* who she didn't marry. And how she married a preacher and moved to rural Ontario with him. As my dad put it, "That's a real downgrade, even, or especially, then." She seems to have had an unsatisfactory life, although it was successful book-wise. L.M. Montgomery was probably trying to help her gentle readers avoid making themselves what she felt had been a dreadful mistake. The intensity of this theme in her writing combined with the reality of her life makes me sad.

Today I went to see The Secret in Their Eyes (El secreto de sus ojos), the Argentinian film that won this year's Oscar for best foreign language film, while I was in Ann Arbor. (I refuse to capitalize the award's title like Wikipedia/the world does, sorry.) It's a crime drama about a man who tried to put a murderer/rapist behind bars even after the case was closed, and about how he writes a novel about it as a retiree twenty-five years later, because he's still haunted by the case. It's a compelling film, often upsetting, but not unbearably so. There were twists and turns I half-anticipated, and others that were unexpected. It's some sort of love story, too—the main character is also haunted by the memories of moments where his life could have taken a different turn. He loved his boss, but twenty-five years later, she's married to the man she was engaged to at the time of the case and has two children. They never managed to talk about it, about 'us,' but, as the New York Times hilariously says, their not "especially secretive" eyes "appealingly convey the...heat of regret."

When the movie ended, we were all a little uncertain. I liked it. Cooper read the movie poster outside the theater and said that he disagreed with the quote on it: "It doesn't leave me wanting more." The story definitely ended. But it left me thinking about all the love stories put on hold, some indefinitely. Even if they work out in the end, think of all the empty years between. I dropped Cooper off at his house and drove to my next, lonely stop—I was to sit in my car by myself and wait for my brother to get back with the other car, so I could drive it home. I came to a stop at a red light, and sat and watched the rain all over my windshield. 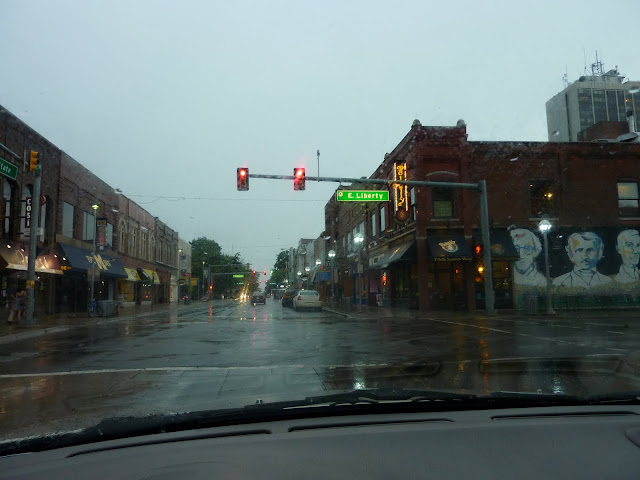 The car was quiet, so I pushed the cassette into its slot. Sting came on, singing the Police's "So Lonely." I'm pretty sure it came on around 1:53 into the song—all the verses were done, and all that was left was over a minute of "Lonely, so lonely, so lonely, I feel so lonely." In the rain. Alone in my car with the specters of all those stilted romances. So lonely. So lonely. So lonely-lonely-lonely-lo, lonely-lo, I feel so lonely.
Thanks, Sting.
*I bet that, knowing my proclivity for accurate foreign spellings and that silly coda to this post where I go on about accent marks, you didn't expect me to go with the anglicized spelling. Sometimes, I'm surprising. 'Beaux' is too weird for English.
Posted by Marisa on Monday, May 31, 2010

Don't be too lonely!