A Wonderful Waste of Time?

I'm eating brownies and ice cream for (late) lunch because I couldn't come up with anything better, listening to the Verve Pipe on my brother's dusty old boombox in an attempt to fill the quiet with something somewhat novel, and gearing up to clear a walkway through my bedroom. My life is great.

Little-known fact: the Verve Pipe at Freedom Hill was the first concert Emma and I went to, for some reason. With Rubyhorse opening. I don't know why no one ever remembers "Sparkle."

Anyway. I was in Pittsburgh over the weekend. Here are some things I learned there:

2. It is very, very easy to end up on an expressway by accident in Pittsburgh.
And to look at your crappy maps and plan how to get where you want and then end up outside the city and off your crappy map somehow. 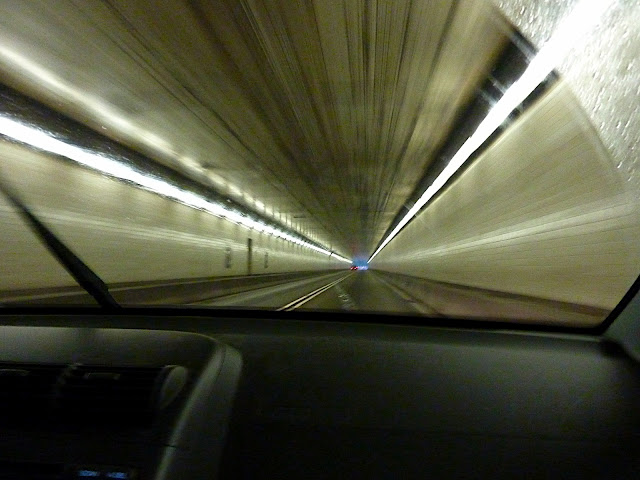 4. Pittsburgh is a pretty cool-looking city.
Lots of nice, old buildings. Lots and lots. Unfortunately, I mainly only have car photos Emma took as we entered the city. 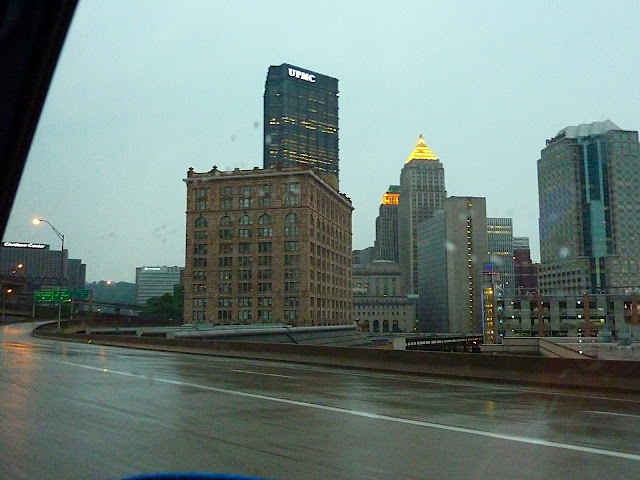 5. Mountains + college campuses = Carnegie Mellon's campus is crazy.
There's like a train going underneath a bunch of buildings above other things. I would prove this if my camera battery didn't die really early on. 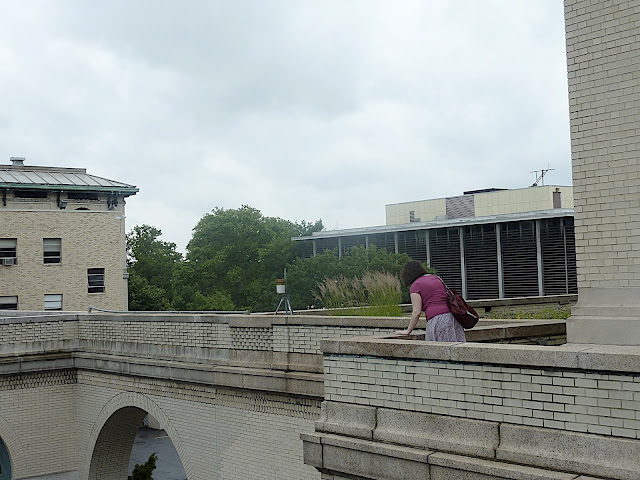 6. As I so eloquently summed up in a text message: 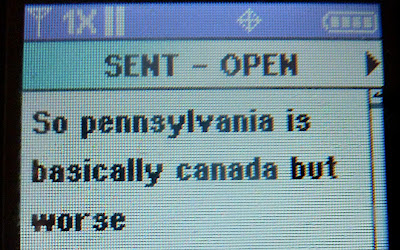 I only meant this in a specific sense. Wine and liquor can only be purchased at state stores. Alcohol can only be purchased until 10 pm. We were at the second-cheapest motel we could find. Drunk was in order. But we drove and drove down PA-60, and no alcohol. Beer Express was closed. It was 12:30. So, if you want drunken motel time, plan ahead in Pennsylvania.

7. The Cathedral of Learning is hilarious in person, as well as on the internet.
Emma rushed in as soon as we got there. Cooper and I thought that eating our sandwiches was more important at that specific moment, but she set us straight: 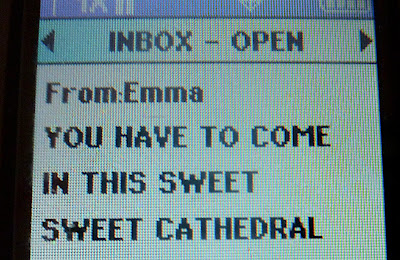 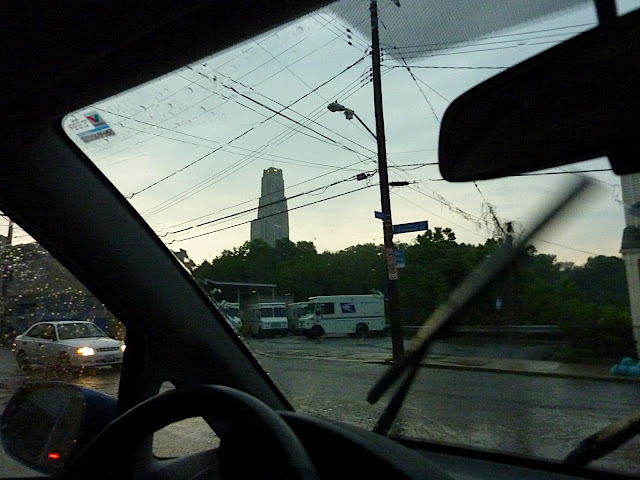 Here it is, the tallest educational building in the western hemisphere. 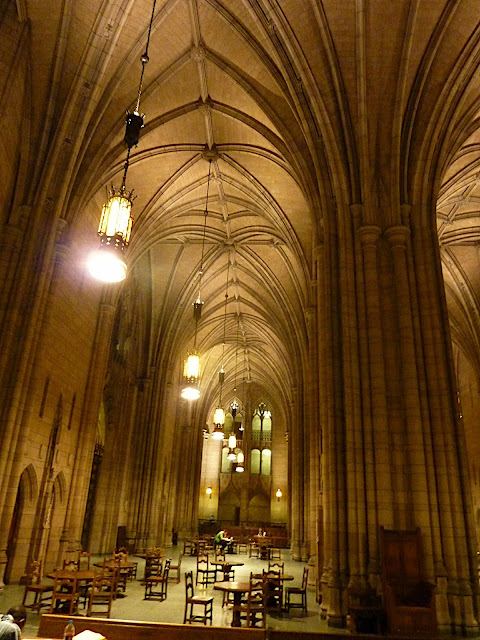 8. The Heinz Memorial Chapel is entertaining.
It was designed by the Cathedral of Learning guy, and it has the likes of Isaac Newton, Abraham Lincoln, Abigail Adams, Emily Dickinson, and Benjamin Franklin on the stained glass. The last two got quotes—Ben Franklin's was "Early to bed, early to rise makes a man healthy, wealthy and wise." In a church. It's funny. Farther up the windows, things get more religious, but up that high, you can't really tell what's going on and it hurts your neck.

9. Peace, Love, and Little Donuts—these donuts are really good.
We didn't try anything complicated or crazy, though. No bacon on donuts for us.

10. Hanging out on bridges is fun. And Pittsburgh has so many, several of which are yellow. 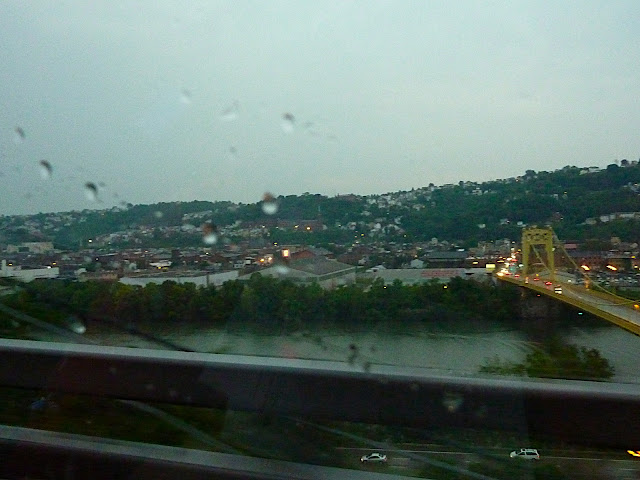 Okay, I already knew this. Whatever. It's worth mentioning. Also, from the bridge we were on—the one going from the Strip district across to all that Heinz stuff—we could see four to five old churches poking up around us in the distance. It was so nice. Then we stared at these people in swimsuits with a boat who were, according to Emma, trying to show off how attractive they were.

11. The Pennsylvania Turnpike claims to be America's Superhighway.
I'm skeptical. My dad said that this was maybe true historically at some point.

Cooper, Emma, and I were in Pittsburgh because Emma is spending six weeks there taking second-year Polish. Because she's amazing and plowed through year one in a few days on her own in preparation. She practiced with the cats. Speaking both parts, clearly. That was months ago. Then she took an exam and went back to studying Greek all the time.

So we were helping her move in, except, to where? Housing plans fell through. We slept in motels. We got lost a lot. We had to find parking all the time when we wanted to be not in the car. Which we wanted to a lot, because we spent so much time in it, getting lost or taking indirect routes to our destinations. In the end, we got an extremely thorough impression of downtown Pittsburgh through the windows of a car, and of several other neighborhoods and areas outside the city, too. We spent a while parked downtown because the rain was so extreme on Saturday that you just couldn't really see. When that rain started, we were on an accidental expressway. I was thrilled. The weather did get nicer after my camera battery died. 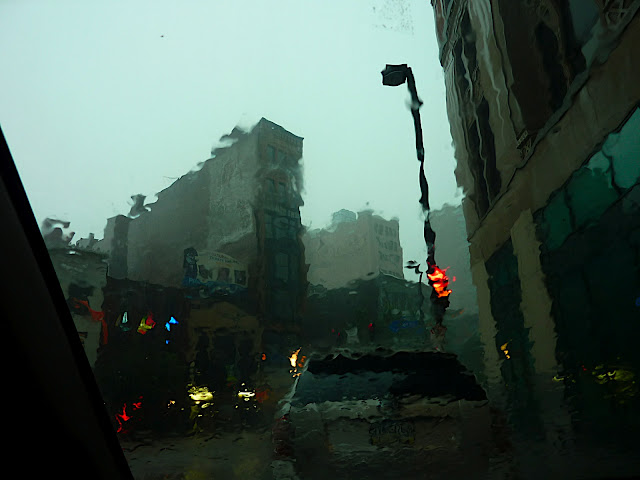 The rain was even worse than it looks here.

But it was fun, even if it was often frustrating and sometimes monotonous. I would go back to Pittsburgh—but with a real map, plans, and a place to stay.

Oh, and:
12. Driven is a horrible movie.
Thank you, slightly-nicer-second-motel's TV for teaching us this. Except really, I could've done without the lesson. I just tried to read the plot on Wikipedia, but failed to follow it. I think they're lying, and it didn't have a plot, just a lot of race cars and people's eyes and Wilson from House and Til Schweiger as "Beau Brandenburg" and three-second-long shots. It was written by Sylvester Stallone. Do not watch it. 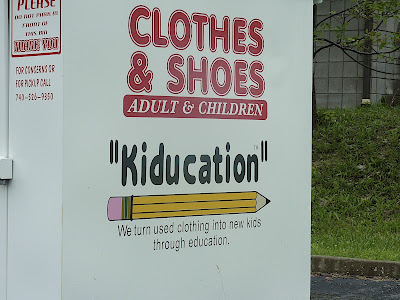 Here are the rest of the photos, if you're interested in grey skies and the Cathedral of Learning.
Posted by Marisa on Tuesday, June 08, 2010