It must be summer 'cause [I'm] never around*

It's July. Cop-out post. I'm backdating it to June, though. It's not July until I go to sleep and wake up.

Pittsburgh was almost four weeks ago. So long since I've seen Emma. Summer is half gone—if my summer ever ends. The future is still uncertain, but July should be a busy succession of fun fun fun and gone gone gone*(**).

West Michigan, Lansing, Ann Arbor?, Rhode Island (and hopefully Boston!), Lansing, probably Ann Arbor, West Michigan (I like to visit the same people, obviously)...and then on to August, but let's try to let July take its time. Let's not rush on to August. Let's try to hold onto the present and make it count.

Also, if you find yourself in Ann Arbor without a place that you live in and several hours to kill and you want fresh air but enough shade to see your computer screen and have a table but you don't need a power source, the tables outside the art museum are great. Yes. I'm blogging about how great it is to sit around on campus, again. But it's so pleasant. If only I had been drinking Eisschokolade while I skyped with Maraia. Lucky Maraia in Berlin! Skype is great, so is sitting outside the museum, here's a photo the end: 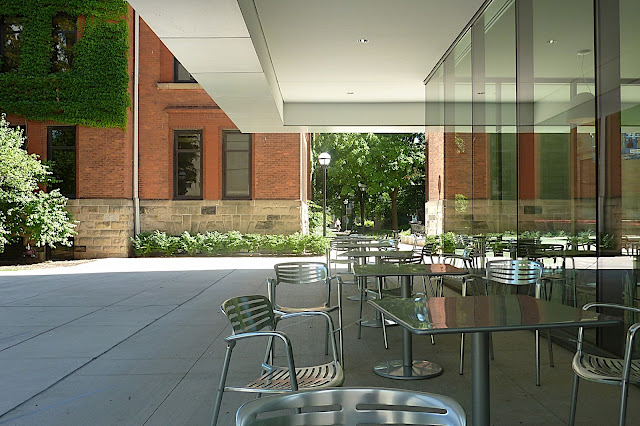 BUENO I love my own adventure. And those of others, usually.