ÖÖÖsterreich Is a Great Name

So, this time last year I was 21. And instead of just getting back from Pittsburgh a few days before my birthday—which was weeks ago, but this post took me forever to write—my brother and I returned from Austria. Yes, lovely Austria. Three days later, we went to Paris, and as those links suggest, I actually wrote about Paris at the time. Austria only got one post, in which I did not even mention that the dogs who had inspired it were frolicking in front of the Hofburg, the palace that served as the Habsburgs' primary winter residence and now houses the President of Austria, let alone that they were Viennese. 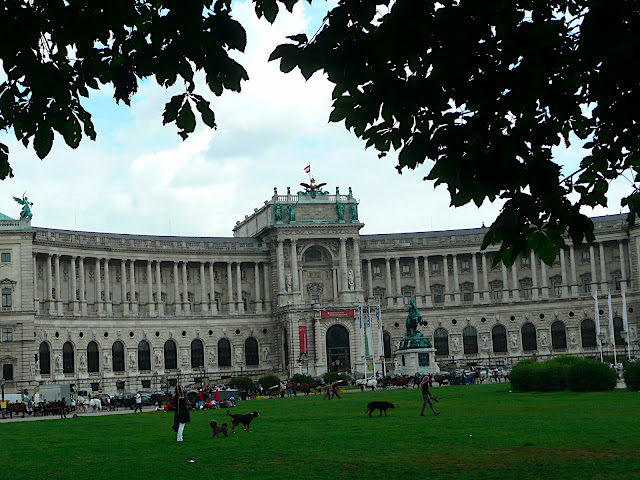 Here are but a few of our favorite Wiener. Yes. People from Wien. Vienna. Sorry. I'm talking about the dogs. Dogs are people too!

Sidenote: Emma, who is, like me, actually a cat person, also wrote about dogs recently. If 'recently' means in her last post, which was posted weeks ago, that is.

Anyway, I'm trying to remember what I liked so much about Vienna, because it was certainly a good time. Part of it was the weather. Blue skies do a lot when it's been rainy for days, even if the clouds move at a rapid pace and it gets a little chilly when they're blocking the sun. The food was good. 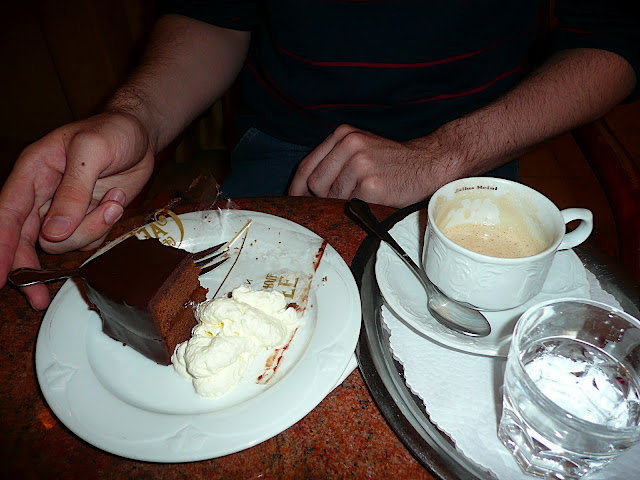 John and I had Sachertorte with Melange, pictured above, because that's so typically Viennese. And Melange is a certain kind of coffee, not the drug also known as "spice" in Dune. In case you were confused? No, I know, this is stupid. Sachertorte is two layers of chocolate cake with some apricot jam in the middle and then a yummy, dark chocolate icing. It comes with cream. The cream is so good. Coffee, meh. Still not a fan. But with enough chocolate, it almost starts to make sense. 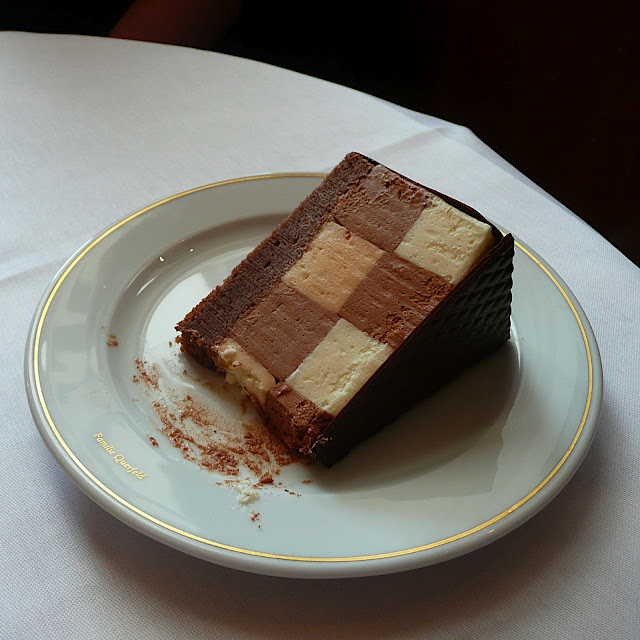 This cake was better, though. It was John's best cake of Europe. And he was there for five weeks, eating cake with me, our friends in Munich, and my aunt. Especially my aunt. She suggested or produced Kaffee und Kuchen like every afternoon I was with her in Europe. Kaffee und Kuchen is high on the list of Best Things About Europe. If I had more photos of Kuchen, I would have made a Kaffee-und-Kuchen post long ago. Anyway, this cake. It's called Pandatorte, I guess because it's dark and light, and as you can see, it was mainly creamy chocolately deliciousness. I think we may have had this, and not the Sachertorte, at the Hotel Sacher or whatever, but I'm not really sure anymore. We were definitely underdressed, wherever we were.

You know what, I just want to let that piece of cake tell you everything about Vienna. Vienna is great. Vienna is tasty. We had Schnitzel. Oh man, Schnitzel. I love meat that is breaded and fried. 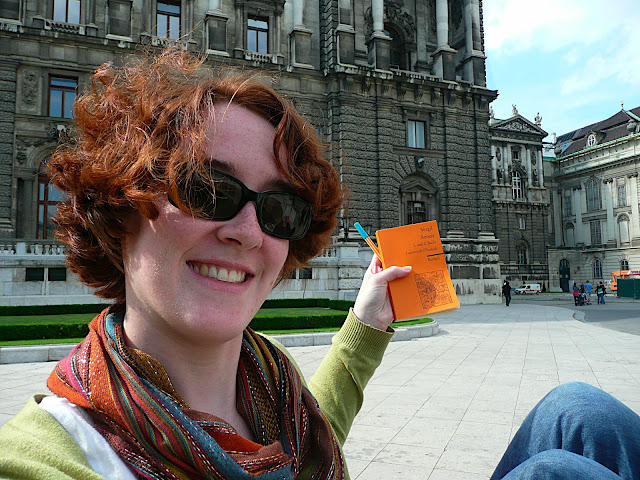 Other things that are good about Vienna: I like the Hofburg. We hung out in the gardens and read books—John, something for fun, me, the Aeneid auf Deutsch for this Language and Culture of the Ancient World II course I took for some reason (oh right, because there was almost no work and I was compensating for usually only studying the Greeks, because fuck the Romans). I also read Dorothy Dunnett, of course. 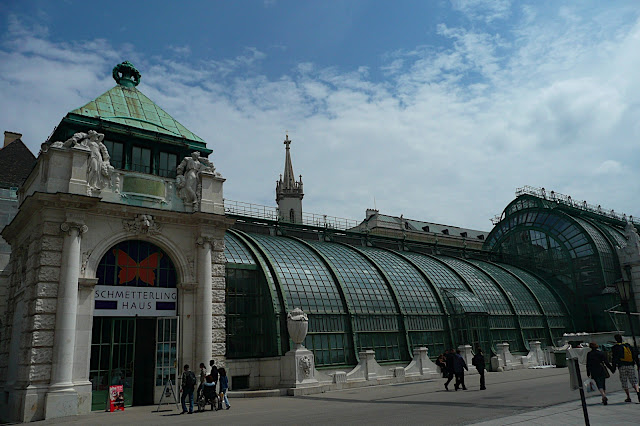 We went to the Schmetterlinghaus ( = butterfly house) and saw the biggest butterfly species in the world. It's scary. Ugly and scary. And right below this paragraph. 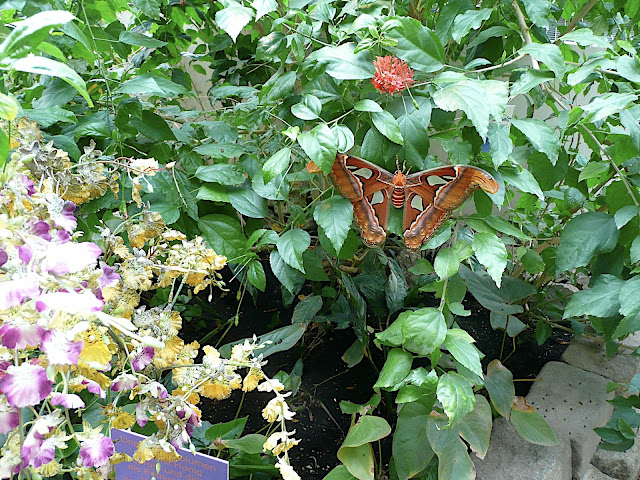 We saw Gustav Klimt's The Kiss at the Belvedere museum, and other paintings by him, and other things that I don't remember, but Klimt was cool. Then, I think I got to have Grießnockerlsuppe at the Belvedere café!! Grieß is wheat semolina, and Grießnockerl are basically dumplings made of Grieß, and then you put them in a Suppe, or really a broth, and then you are eating this tasty but rather plain soup of broth and starch and I love it, even though there are little green things floating in it. Every time I try to type 'broth' I type 'brother.' Or maybe I had Frittatensuppe or whatever that's called, which is broth with shreds of pancake in it, but I think that this was a time I got to have Grießnockerl. John wasn't impressed by it, but that's okay with me.

If this is just going to devolve into inane discussions of food that display my unsophisticated palate, I guess I'll post the following photo. 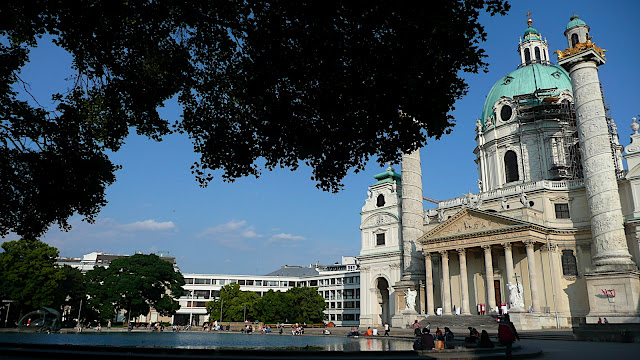 Above is Karlskirche, which is at the U-Bahn stop (Karlsplatz) John and I took, or at least switched lines at, every day as we came into the city from the hostel. It's obviously baroque and somewhat silly-looking, but unlike the Berliner Dom, which I find incredibly stupid, I kind of like it. The last evening we were in Vienna, John and I—here's the lame part—got McDonald's to go and ate along the reflecting pool. We weren't the only ones doing so, either. There were a ton of people there, and those chicken nuggets were good. Sometimes, you are tired, and hungry, and just want something easy. McDonald's is so easy.

Another thing I liked about Vienna was our hostel. We stayed at Hostel Hütteldorf, which I remember as being a Hostelling International hostel, but the website doesn't seem to say that. Either way, it was the cheapest I found, and for that, we were farther out from the city than Schloss Schönbrunn, which is the old summer palace, but not too far, and it was kind of nice to ride the U-Bahn into the city every morning. (Weirdly, the Untergrund-bahn is above ground for a while outside the city, which continues to confuse me.) The biggest downside about the hostel is that it's on a hill. That hill is horrible when you have luggage on your back, especially when you can't find the hostel, and it's still bad after long days of walking. But it is really nice to see all the green hills and the open sky when you get out of the U-Bahn station. And the view from our window was pretty. Sunset-light on churches is great. 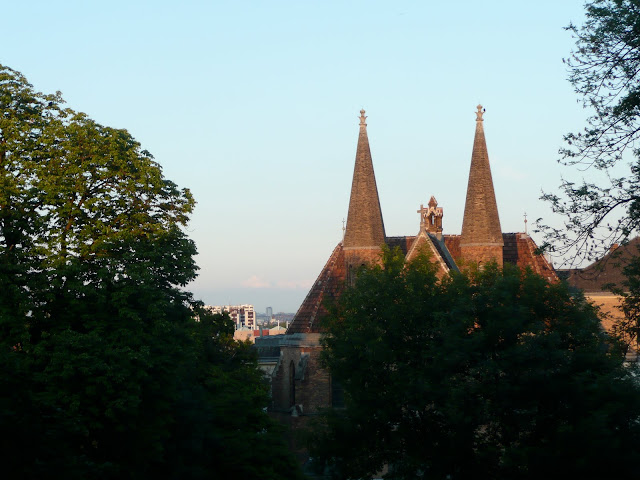 Two more things, I think. One. Schloss Schönbrunn, Empress Maria Theresia's answer to Versailles, is lovely "Bavarian" yellow (that's how my mom identified her ideal color for our living room) and much cheerier than Versailles. The gardens are nice. The zoo is great. It's the oldest zoo in the world (having begun as the imperial menagerie!), and they have great polar bears and an awesome Rainforest House to boot. There's a lot more about the zoo in my Vienna Picasa album. And more photos in general.

Two. This is what I've been trying to verbalize for weeks, but I've failed to figure it out and so have babbled about food and nonsense for who knows how many paragraphs. I certainly can't be bothered to count them. I really liked how it felt to be in Wien—in my head, Vienna's almost always Wien. I can't quite explain how it felt anymore, but I liked it. I liked the avenues, and the smaller streets, and the sky. The buildings, of course. At the city center, there are horrible crowds sometimes, but there's still space. That's part of what I like about Berlin—after a lot of time spent in smaller places, it's nice to have a change—but the space in Wien isn't like Berlin's at all. But I like how it feels both places. When I applied to being an English teaching assistant in Austria for a year, I was excited that I would be in the vicinity of Vienna—oh, bad alliteration—and would be able to visit more than once. Alas, it was not to be. 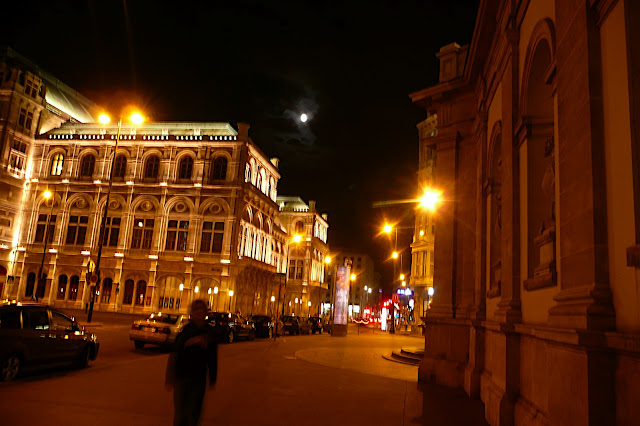 After Vienna, John and I went to Salzburg, but let's just leave that story to my photo captions.
Posted by Marisa on Friday, June 25, 2010

Karlskirche was my favourite. And yes, we had Grießnockerlsuppe there, the Frittatensuppe was in that expensive restaurant in Salzburg, when I was feverish. Neither were good. Too many gross green things, and the starch wasn't good either. Just the broth. The Pandatorte was at Café Mozart I think. We were ridiculously underdressed all the time in Wien.

Maybe you liked Wien so much because it wasn't Prague? Also, I think the butterfly is really beautiful.