This is the last straw, as Rebecca Dew* would say

The last straw is that my throat is sore. My throat is making me feel miserable. This happened just two weeks ago—I woke up on my birthday, realized I was far too aware of when I swallowed, ingested far more vitamin C in the form of sugary little tablets than necessary, and crawled back under the covers seeking a healing oblivion. I refused to be sick for birthday, part two, which was to take place the next day in Ann Arbor. Anyway, today my throat hurts like it did that time, and I've decided to blame it on my stuffy, dusty, cluttered bedroom.

There are people who would say that I place too much weight on the tidiness of my bedroom, especially considering that this bedroom, the one I've had since we moved here when I was five and half years old, probably hasn't met anyone's qualifications for tidy since I started college just about four years ago. Because, you see, my dad stole my closet from me around then, and nothing has been the same since.

When we picked bedrooms, I got to choose before my brother because I am the eldest, and at five years old, I guess large built-in desk trumps much bigger room with closet large enough to turn into a bathroom if you wanted, a fact which I often regret today, although the afternoon light I get and the fact that my room is on the first vent-thing from the furnace makes up for it. What this means, though, is that the closet I have been deprived of for so long is not that big, but it still makes a difference. Dresses and skirts and jackets need to hang somewhere, and it's really annoying to have to search through everyone else's closets to find what you're looking for. Plus, the other closets get blocked by piles of stuff because no one really needs to access what's normally in there. And then there are the boxes. Closets are a great place to put boxes of things you probably don't need anymore but would rather keep, although I've made progress in reducing the number of boxes.

The reason I have no closet is because my closet contains the portal to the attic, and the attic is the site of my father's painstaking campaign to decrease our energy bills. It was great when he took out the old insulation, and then it was winter, and everything was cold. But, eventually, he filled it. He built walkways to access the huge fan in our attic. The huge fan in our attic, whose motor is broken. That's the reason that he almost didn't give me back my closet two weeks ago, when I realized it was summer and demanded it back. He wasn't going to finish that last bit of insulating until the fall, when it cooled down again. But the fan! The fan! The fan is broken! Oh well. I'll empty out my closet again if you ever get around to getting it fixed. It's a gamble I'm willing to take.

I banished the ladder from my closet, and then hours later he returned, reluctantly, to help me put the shelves back in—I'm not tall enough for that to be easy. "The closet won't solve your problems!" he told me, in a last attempt to keep his way to the attic clear. "No, it will," I told him. "I'll wager a large sum that it won't," he replied. I laughed forever in my head, but for some reason, I didn't take him up on this, even though it will definitely solve my problems. He was just referring to the clutter sprawl all over our house, not my problems in general—whatever they are—and having a closet definitely makes my room being clear easier. That is my biggest concern. It will improve my quality of life drastically when I can walk from my bed to the door without stepping over things and then swinging my hip in to the doorknob. Okay, that's impossible to avoid. I will always walk into doorknobs.

Although I don't think he was talking about problems in general, there is a pretty big part of me that thinks a clean room will improve most aspects of my life. It's easier to think when there are clear surfaces. It's nice to not always sit in the same place. The internet works better at the other end of my room. I can't do yoga on top of five boxes. This room is driving me crazy, and to return to the start of this post, I think it's also making me sick. I don't usually get sick with the same sore throat twice in one month. But when I was little, I would have an irritating cold for the entire winter, and my mom came to the conclusion that it was because my room was too dusty. I don't even know that this makes sense, but I'm going to run with it, because I need to finish this. I was reading on the Diag the other day in the late afternoon, and it was beautiful— 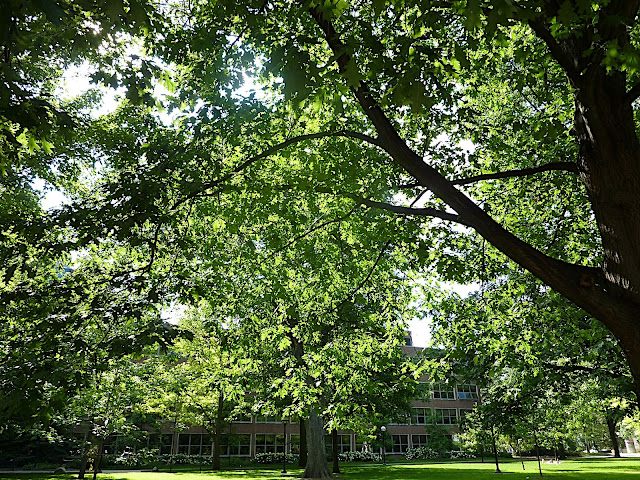 look at it be beautiful—
and I was happy, and it hit me, as keeps happening lately: THIS IS MY LIFE. And it can be like that, reading intelligent books in fresh air and thinking constructively about things—which is easy to do, it turns out—or it can be like this. Now. Pajamas at one in the afternoon, I haven't had breakfast yet because nothing sounds remotely appealing, and the only thing I can actually fathom doing is playing the Sims. This is my life. And no matter how insane it sounds, I can't get anywhere with it until my room is clean, and so I have to clean it.

It's not even that hard. Two weeks ago, I thought I was one day of hard work away from a presentable room. Not organized, because there are so many books to deal with, but satisfactory. And it's not that hard. Things aren't hard. Building momentum is what is hard. Being pretty much alone all day is hard. Cleaning my room is not. I will do this. Sore throat and all.

*Rebecca Dew is a character in Anne of Windy Poplars. She says this all the time, often complaining about "That Cat." You may have thought my renewed obsession with the Anne books was short-lived, but you were wrong. It's lying in wait. I just can't bring myself to start Anne's House of Dreams because I have issues with growing up right now and I don't want her to stop being understandable. I don't want her to become distant and secondary. Soon, though. Soon I will probably make the leap. Or else I'll just reread the Emily books. They stop before children start swarming. I'm actually back to Dorothy Dunnett's The House of Niccolò right now, though. I think I might devour the last two books as soon as my room is clean.
Posted by Marisa on Tuesday, June 22, 2010

Labels: Summer outside the City