Everything is hard. I know, I know. It's not true. We're all just whiny, spoiled (in one way or another), lazy college students/grads/whatever else we are. Crappy adults, I guess. Anything that requires us to tear ourselves away from the internet—even if it's just to write an email, which is on the internet for god's sake—is hard.

My assertion that everything is hard probably shouldn't come as a shock, considering I routinely refer to the following things as "the hardest thing":
No, seriously. Getting out of bed is my number one hardest thing ten months out of twelve, at least if you're analyzing the frequency with which I say things. To be fair, term papers only come twice a year on average, whereas the morning comes without fail every single day, and it's discouragingly cold outside of my covers probably seven months a year in Michigan. It was still September when I started writing this post (maybe blogging belongs on the list of hardest things), but if I made twice as much money as I do (read: enough to pay my rent, eat, and pay back college loans), I would have been out buying flannel sheets that very day. And come to think of it, sometimes even in May you need two comforters if the heat's no longer on.

The first two years of college, I wasn't really ever cold. The dorms are heated more than anyone really wants, and my mom was concerned that walking was my only mode of transportation, so I owned snow boots for the first time in at least five years. Also an umbrella, even though I tried to resist. (Why?) The rain boot population on campus was starting to rise, and I got these great pink and orange polka-dotted ones that were at least a half size too big but made me look forward to rainy days. Braving the elements to make it to lecture in the MLB, or class in the USB—buildings on the opposite side of campus, how trying!—and arriving still warm and dry was a pleasantly tangible accomplishment. That I could do this in under ten minutes made it better. My reward at the end of the brisk walk was that I got to sit in a warm auditorium in a nest of my coat and scarf and hat and gloves, full Nalgene on the floor next to me, and relax. Lectures are easy, at least when they're literature or anthropology. They were usually anthropology. All I had to do was pay attention and write down everything important the professor said. I'm good at notes. Even if I struggled to stay awake in some lectures, the topics were interesting in general, if sometimes poorly executed.

Wait, what happened to life being hard? Where has my complaining gone? The key here is that I'm remembering freshman and sophomore years. (The good old days? Not exactly, but okay.) Senior year, back from Germany, I lived ten minutes off campus and down a hill. The solution was my bike—but even with a rain jacket, that was awful in the rain. And then the snow. And the lack of decent plowing in this town. I didn't touch my bike for at least two months. One day this September, I walked to work because it was raining. It turned out that it was barely raining, and I might as well have biked, but oh well. Walking gave me more time to think about how I didn't want to go to work and interact with my coworkers. It was my first full day working at the restaurant I now spend about twenty-five hours at per week. (Newsflash! I have a job!) I walked across the Diag, through the throngs of students on their way to class, something I usually avoid when on a bike. As I walked under the Engineering Arch—such a familiar sight my first two years of college—I thought of it resplendent in its October ivy, and how I used to walk the opposite direction under it in the morning, and oh how I wished I was on my way to learn about kinship structures, or human evolution, or even that silly class on Scandinavian civilization. Instead, an unfamiliar industrial kitchen. Customers. 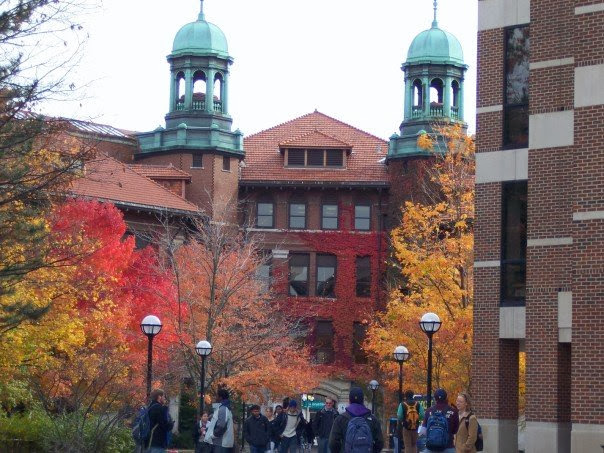 Here is the arch in the beautiful colors of fall 2006.

Now I live practically on campus again, but on the other side. I'm close to everything. But unlike the dorms, there's no heat so far. Someday (soon? please?) the landlord will turn it on, and maybe getting out of bed will be hard only because of the weight of my legs pulling me down, and not because my hands will freeze if I get out from under the covers. But, to add to my life-is-hard list, a disturbing discovery I made last week: there are only two heat vents in our entire attic apartment. One in each bedroom. In addition to two bedrooms, we have a bathroom, a big area containing the kitchen and a random couch and the staircase, and then a nook coming off the kitchen which we call the living room. And only two heat vents. Heat rises, so the attic should be warm, right? Or, maybe not. The roof and the old windows and the skylights may just invite the heat out into the big, cold world around us.

This is pretty much the post I wanted to write originally. Then life got even harder. It was almost one a.m., and I was about to get ready for bed, but first I wanted to get the last few pieces of the pizza Emma had made me off the cookie sheet and into the fridge. It wouldn't budge. I did as Emma had done, prying the pieces off with a knife. Alas, she used a butter knife, whereas I used the sharp knife I had used to cut the slices. You see where this is going. I pretty much stabbed myself in the left palm right under my pointer finger, because I am an idiot. We were at the ER until four a.m. I have two stitches, I'm not supposed to do dishes, and I work in a restaurant where everyone does dishes. I went back to get my stitches out after the seven to ten days were up, but no luck; instead, one more week of stitches for me. I'm allowed to do dishes now, but I'm still not supposed to keep it wet for very long, so that's a problem. Life is hard.
Posted by Marisa on Monday, October 18, 2010