I was looking for an important document I'd misplaced and, having exhausted the logical places, decided to check the box of fairly-organized folders and extra notebooks and paper that's been a tiny archive since I moved out of the house in Ann Arbor to go to Deutschland. There was no way the letter would be in this box, since it came in the mail before I moved back to America, but, you know. Despair. Nowhere else to look.

Anyway, I came across some lists I'd made in the past that seem to become funnier every time I read them. First we have three sheets of blue "inter-correspondence paper" from MichCon, which my family inherited from my dad's office back...who knows, it was when he still worked. Fifteen or so years later, there's at least one coveted little stack left. It's still my mom's favorite paper for lists and, during the summer of 2007, it was the paper on which I tried to pull my life together. I kept a series of lists on my master clipboard. The "TO DO" list is bleak: I didn't exactly make practicing piano or my Gaelic harp a habit again in the years after high school, nor did I put air in my bike tires until the following summer. I did, however, finally take up flossing my teeth in Germany and have plucked my eyebrows half-heartedly a number of times since the list was written.

In spite of having essentially no income that summer, I also had a "WANT" list. I got only a fraction of what I wanted (Harry Potter and the Deathly Hallows, a sofa bed, and sheets for said sofa bed) and in the intervening years have failed to buy any of the other items. Oh well, Grease on DVD, I guess I've survived without you. More interesting is the "DON'T NEED" (more of) list. As in, come on, Marisa, save your nonexistent money for things you actually need. There's a handy "ALLOWED" list for the coming winter as well. Unlike the components of the "WANT" list, I've acquired some of everything on the "DON'T NEED" list, aside from pajama pants, which I really do need these days. "Tight clothing, short tops" is debatable...I would at least like to think I've avoided the "uncomfortable and unseemly" ones mentioned on my list. Forbidden items of note: 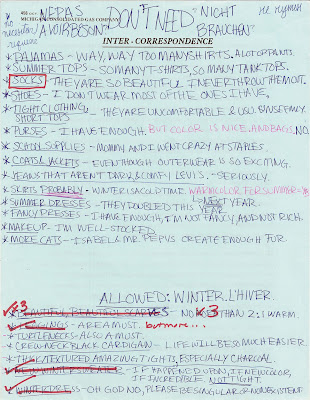 SKIRTS PROBABLY – WINTER IS A COLD TIME.
PAJAMAS – WAY, WAY TOO MANY SHIRTS. A LOT OF PANTS. (May I add that my pajama shirts are sports t-shirts from elementary and middle school and the pajama pants were like 3 years old at that point? Now they're ripped and...unseemly.)

SOCKS – THEY ARE SO BEAUTIFUL I NEVER THROW THEM OUT. (But not getting new ones is unthinkable.)

MORE CATS – ISABEL AND MR. PEPYS CREATE ENOUGH FUR. (Then Emma adopted cats when we moved out of the dorms. So far it's one per year. Maybe grey and black will be joined by white this year?)

When I think about how it's January 2010 and I wrote the list in probably June 2007—well, first I start freaking out about the velocity of time but then I remember that wardrobe needs do in fact change over the years and you can't expect your clothes to just last forever. But it's still funny how good I am at buying and being given the things I "DON'T NEED." One of my aunts has given me two black velvet dresses in the past two years. I need to start dating rich men with functions to go to so I can put them to use outside the living room.

I also found a motivational list of "Things to Remember" from November of freshman year of college. It includes the funniest piece of advice I've ever given myself: "sleep is important, it's okay." 'Okay' is triple-underlined.

I really took that lesson to heart.
Posted by Marisa on Saturday, January 23, 2010