This is old news, but two weeks ago I took my first trip into Switzerland. Switzerland's not really on my to-do list, but Basel is within the reach of the "Regiokarte" I have for the month, until the new semester starts and I can buy the cheap semester-long regional transportation ticket for students. The Regiokarte is more expensive, because it allows its bearer to travel within five regions (instead of just Freiburg's) on weekends and after 2 pm on weekdays. By the time I had been in Europe for a week and a day, I had increased my number of foreign countries visited from two to three. Wait, Canada exists, so four. And I flew into Amsterdam just over three weeks ago...but that doesn't really count. All I saw were hoards of windmills from the airplane and then the inside of Amsterdam's airport. 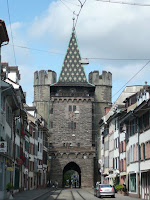 Basel counts, though. We had to deal with the hassle of the Swiss Franc and learned about how the Basler Münster lost a lot of its colorful stained-glass windows when it became Protestant. Erasmus left Basel for Freiburg during the Reformation (much to his dismay–he hated Freiburg because it was a small town with a bad university). Despite that, Freiburg has a more impressive cathedral. The older, Romanesque part of Basel's cathedral was my favorite part.

(This is a medievel gate, not the cathedral.)

We also visited Basel's Kunstmuseum (art museum), because it's free the first Sunday of every month. It has "the largest and most significant public art collection in Switzerland" (thanks, Wikipedia) and although I was as impatient as I always am in museums, I think that it is what made the trip worthwhile. One painting I liked a lot is called "Die Nacht" (The Night), by Walter Kurt Wiemken. He was a Swiss Expressionist and then Impressionist painter and I'm not sure what else, because I don't have time to read the Wikipedia article auf Deutsch. But I liked it enough to buy the postcard of it so I'd remember his name, even though I had to deal with Swiss money. There were a few works by Paul Klee that I also liked, and two by Franz Marc that I would love to put on my wall right this insta 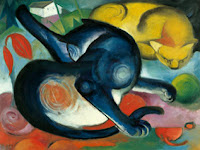 nt. I saw this one, "Zwei Katzen, blau und gelb" (Two Cats, blue and yellow) and one with a cow in it, although I'm not sure which one. The cow was my favorite, and there are two paintings with cows—along with many more lively, colorful animals—on this website, which you should definitely check out.

If you want to see more of Basel, go here.
Posted by Marisa on Thursday, September 25, 2008