Schoko = The Best Prefix Ever

My respect for cereal has been growing in the past month or so, starting when I was at home on a Friday evening and realized dinner wouldn't be coming any time soon. I had a bowl of corn flakes with milk and sugar. And another one. Then I pretended to be patient and waited for the pork chops. In Germany, I bought corn flakes and 'Hoopy Honeys,' hoping they would be like Honey Nut Cheerios. They're not, they're like honey nut Froot Loops–big and hard and not as good. That was a disappointment. This week I decided to be more German and buy some Müsli (granola) instead. 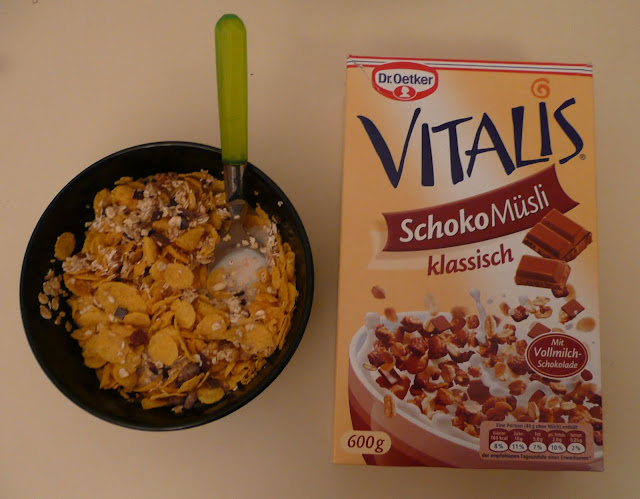 I ate Schokomüsli (chocolate granola) at least once a day every day this week. I like oats and I like chocolate and what is better in the morning (or afternoon or at midnight or as dessert after my pasta and broccoli dinner) than some crunchy cereal with little pieces of real chocolate in it? And the fettarme (lowfat) milk is 1.5%. Mmmm. In one week, I've gone through an entire box of corn flakes and almost an entire box of Schokomüsli. I've drunk more milk than I usually drink in a month. I think. It's just so easy, so dependable, and so delicious. Maybe I'll get so used to milk that by the time I come home I'll be a milk drinker.
Maybe not.
In other food news, on Monday I tried strawberry jam for the first time since I was in France—I admit, this was a stupid achievement, seeing as I liked it in France and inexplicably refused to eat it during the intervening three years in America. I also tried Schoko Milchreis (literally milk rice) which was puddingy and tasty, except for that biting into pieces of rice was sort of weird. On Tuesday I ate Maraia's stirfry—broccoli, zucchini, mushrooms, and seitan. Okay, so I didn't eat the mushrooms. But the other things!! Seitan was easier to deal with than the zucchini. Zucchini was just mushy. Bleh. In Alsace on Saturday I ate brioche for the first time in three years (mmmm) and also another bread that had thin almonds on top of the thin layer of icing. It was delicious.
Posted by Marisa on Sunday, September 21, 2008

Oh how I miss me my Schokomuesli!