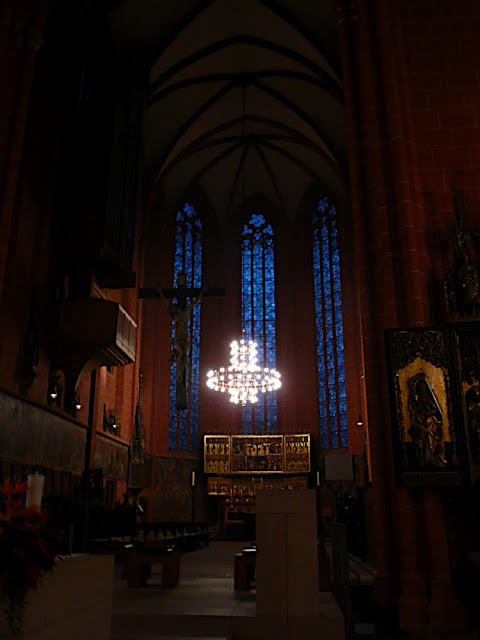 Allerheiligen is All Saints' Day. I'd forgotten that was today—Facebook has updates about the word counts my friends have already reached for NaNoWriMo (National Novel-Writing Month, of course), or whether or not they are honoring No-Shave November—but not how All Hallows follows Halloween. I already forget what made me remember.

The only time I ever observed All Saints' Day was—naturally, I think—the fall of my year in Germany. The first month we were in Freiburg, we took intensive German classes at a language institute located by the university. At the end of October, when the Wintersemester began, we began an "Aufbau" course at the institute, in the evenings after our university and program courses were over, to help build up our writing skills and prepare us for those scourges of the German university system: Referate (presentations) and Hausarbeiten (term papers). We didn't get out of Aufbau until the dark of 8 o'clock, if I remember correctly.

The weekend of Halloween (it fell fortuitously on a Friday that year) I made into a long one. That Thursday, I lugged my suitcase to Aufbau, then rushed right to the train station after class to catch the first of several regional trains that would take me, cheaply and leisurely (slowly), to Aschaffenburg, my expatriate aunt, and her German wife. They visited our family in Michigan almost every year, sometimes with my cousins, sometimes without, but I'd never been to visit them. At the end of the weekend, I was happy I had gone because of all the good food (meat dishes! all my friends were vegetarian! also Kaffee und Kuchen in kleinen Cafés!) and the first cats I'd encountered in Germany (living in their lovely penthouse, only friendly on their enclosed balcony) and the fact that my aunt had made me speak German for a significant portion of the weekend.

On Halloween—which is an entirely American holiday—I missed a wild party back in Freiburg, which I hadn't really thought about beforehand, and didn't really care about once I did. My aunt, her wife and I celebrated in our own way, going on a walking tour about the witch-hunting history of their town. I remember the group was big, and it was hard to hear everything the tour guide said (of course in German). It was also very cold, and long. But that meant I got to see a lot of the city under cover of darkness. Sometimes my aunt or her wife would fill me in on what I had missed, or add another detail that hadn't been mentioned. Afterward we went to a bar. They had beers, I had an Apfelschorle. Wie immer.

The next day, I think, was the day we went in to Frankfurt to sightsee a little, eat some cake, have dinner, and see an English play, with one of their other Esel-friends and one of my German cousins. (Esel means donkey, but it stands for English-Speaking Ladies, which is a group of friends that meets every other week or so.) What I remember most clearly is visiting the cathedral (pictured above). The building is red stone, like Freiburg's Münster and so many other churches in southern Germany. I'm not particularly fond of the red, for whatever reason, but I liked this fairly plain cathedral, which was almost entirely destroyed in the war. Part of it was the iridescence in the plain, un-stained glass, which shone a grey-blue in the waning light. Part of it was that my aunt studied the Middle Ages (Middle English in particular), and both she and her wife were always telling me stories about the building of the church, or the tale of the saint in this fresco, and always, always searching for another depiction of the Death of Mary. It's my aunt's pet subject, part of the reason she might like to get a second PhD, I think, and her wife knew all about it too, after all those years.

As we were leaving, my aunt stopped to light a candle, or else stopped to say something about not lighting a candle. But I think she did, because that's the thing to do when you're in a church, to leave your little coin and light a candle for the dead. By then, my grandpa, her father, had been gone just over four years; her mother, just one year more than that. I think it was as she was getting her wallet out that she mentioned they had finally left the Catholic church when Ratzinger became pope because of his strong views on homosexuality, not to mention all the rest. They were married five or six years before, in a civil union recognized by the German state, but not the church they were both raised with, on either side of the Atlantic.

Before we drove out to Frankfurt that afternoon, we met her wife's parents at the cemetery where much of their family is buried. I don't think we stayed to hear the priest speak—over loudspeaker, they said is how it's done now—since I have no memory of this event, just that I was told it was always boring. Maybe I did, and it just wasn't memorable. I do know that I met her parents, she probably went to the graves quickly before everything started, and then we were off to pick up the Esel-lady and head into Frankfurt like the rest of the not-so-religious (across the border from Bavaria, in Protestant Hessen, where Frankfurt is, I think it was a big sale day).

That was already three years ago. I don't remember it so well. I do remember the dinner they cooked, maybe the next day, maybe the day before. Chicken roasted in Calvados (apple brandy from Normandy) and stuffed with apples, which came out of the chicken after cooking as the most delicious chickeny-applesauce, I don't care if you think that's gross, it was the best thing. I remember how, coming down from the loft that serves as the office, after checking my email, I slipped so quickly on the marbles steps in my socks and went boom boom boom the rest of the way down. It was high up, and it was so slippery and fast, and I was badly shaken. My aunt poured me a taste of the Calvados—had already poured it before I fell, really—and her wife rushed to get some little tube of something for me to smell ("Petra and her homeopathic remedies"). I held the railing tightly, scared, every time I went down stairs for probably two years.

This year, they came the second half of August, so as not to miss the family reunion. My boyfriend and I were busy packing, and working, and moving, and seeing friends who were only in-state a little while. I only saw them that one afternoon in the park, with all the rest of my aunts and uncles.

And now this Allerheiligen, I'm remembering my aunt. Not my father's sister, but my aunt, Petra, who I never thought to label—she was always just Petra—until after she was gone, when I began to recite to myself, over and over, in case someone at work asked me why I looked unhappy, trying to figure out what would be best to say. My aunt in Germany died. The funeral was today. The funeral was yesterday. I couldn't be there. Most of our family couldn't be there for my aunt, who so suddenly was left alone.

I always thought of Petra with a smile on her face.
Posted by Marisa on Tuesday, November 01, 2011

That was so beautiful