I Wrote This on November Third

Except for the part I started on the First.

I was going through my list of posts, and discovered quite a few unfinished drafts that I wish I had finished. Most of them are good openings that abruptly end at the transition to the main body. What a stupid time to stop! One of them could have been a complete post. There's not much to edit, it's ready for publication, but it was a retrospective of two summers ago and that's not really relevant anymore. The problem with that one, and some of the half-written ones that could have stood alone as mini-posts, is that they felt a little too open at the time. Open in the wrong way, meaning insecure, fragile, discontented, not open in the way I though I wanted my blog to be, which is consistent, fun, full of details, so that it's easy and enjoyable to keep up with. The way my favorite bloggers write. (Let's maybe not notice that all these bloggers are connected to each other in some way so it's sort of like I'm stalking a group of friends, nope, it's just, links! That's how the internet works!) Not that they all write only post positive things. If your life's too perfect, we might get sick of you.

I've been rereading Natalie Goldberg's Writing Down the Bones, which my mom gave me for Christmas senior year of high school. It's a book about how to write, but for anyone—aspiring novelist, poet, essayist, but also businessmen, teachers, anyone else. She uses a LOT of silly metaphors, and maybe how she writes isn't how everyone learns to write, and I think what I liked about it best the first time I read it was the little bits of her life that came through with the writing. But I do think it's good. She emphasizes that the biggest thing is simply writing. You need discipline, to write every day, or write five pages a day, whatever it takes to get you to practice. It's a style of writing informed by Zen meditation. You just sit down, put the pen to paper—computers barely existed when she first wrote it—and don't pick it up again. You write whatever comes out, even if it's pages of repetitive self-criticism, or revelations you don't want to have, or practically the same thing you wrote two days ago. If you write enough, you get to what's real, what has power.

Obviously, the same does not apply to a semi-public blog. I'm not going to set my fingers to the keyboard and keep them there until I've been typing for an hour and a half, and simply post it. For the past few weeks, I've been trying to take the time to just write, pen on paper (it helps that after two months I STILL don't have internet in my apartment). I haven't tried that hard, I guess, but I am figuring out how to get myself to focus better. Step one was getting a smaller desk to replace the one that didn't fit in my new apartment. The smallest IKEA MICKE desk fits exactly in the space by my couch, and in pure white, it fits the decor perfectly too.

A desk isn't enough to get me to focus, though. I can fidget in a chair at a desk for hours. I pretty much spent two months doing that while I tried to write my 15-page, 1.5-spaced German term paper (probably the most painful thing I ever wrote). What does seem to work like a charm is darkness. I turn out the lights, light a candle or three, and it's kind of like a reset button. The room changes, but in a lovely way that makes me somehow more content. The paper glows, and the desk, and nothing else, and then I can set myself to the task of taking myself seriously without any worry about anyone or anything else. Until I run out of things to say, which can happen surprisingly quickly. But it's progress. 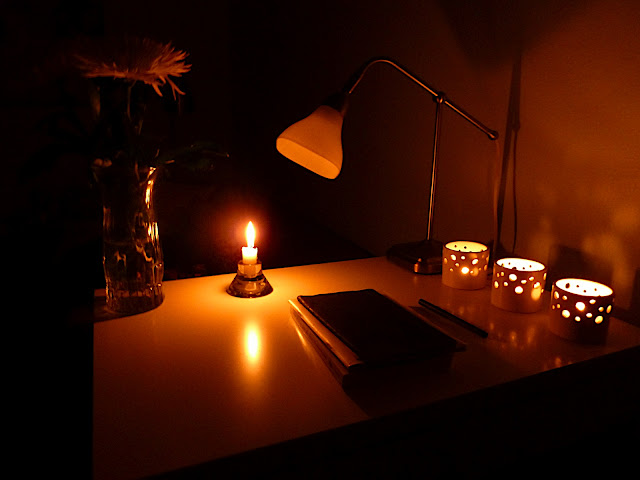 If only there was something similar that made the distractions of the internet go away. (And I don't mean that weird program that shuts down your internet/specific-website capabilities for a timespan set by you, unless I do mean that, in which case, what is it called?) I find it very difficult to focus when what I'm focusing on is a glowing screen with Facebook in the background. 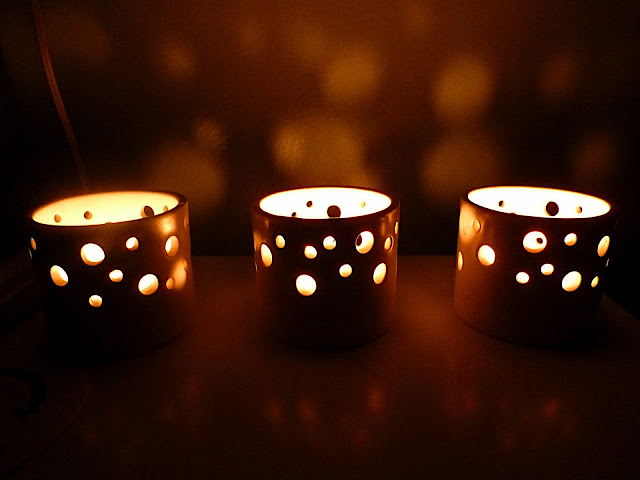 These were the closest things I had to jack-o-lanterns this year.
Posted by Marisa on Thursday, November 03, 2011

That's actually what it's called?

All these anonymous people should at least sign with something! I may know who you are now, but later on, I might forget.