I've lived in my new apartment, the first home I've had all to myself, for almost three months now, and yet so few people have seen it, it seems. I guess I introduced my desk, and another brief glimpse of my bedroom back in October, but it's time to unveil the oasis.

What? If it's being unveiled, it must be exciting, like an oasis. It certainly isn't large, so that angle's out, nor is it impeccably decorated. I'm trying, but there are gaps. When you boil pasta or take a shower, it is steamy like a jungle , and it is an island of warmth in this cold, cold sea. It's hard to fit the whole bed+living room in one photo, because, well, it's just so small. And cozy! 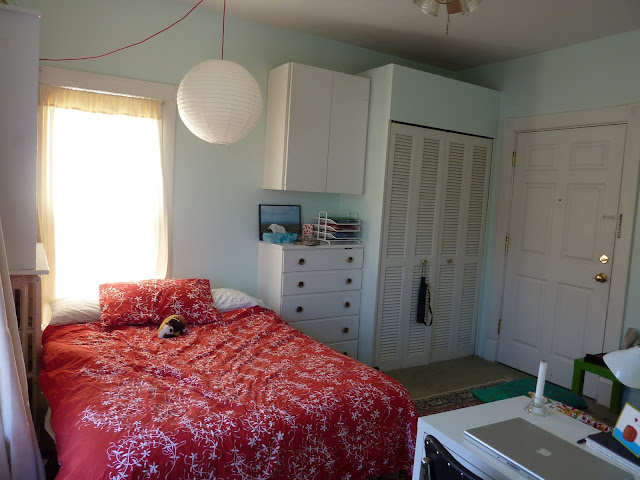 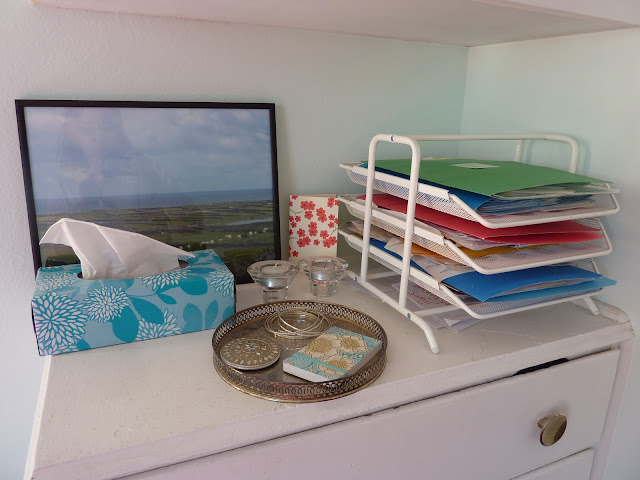 This photo from when I was in Ireland needs to go on the wall between the window and the cabinet. 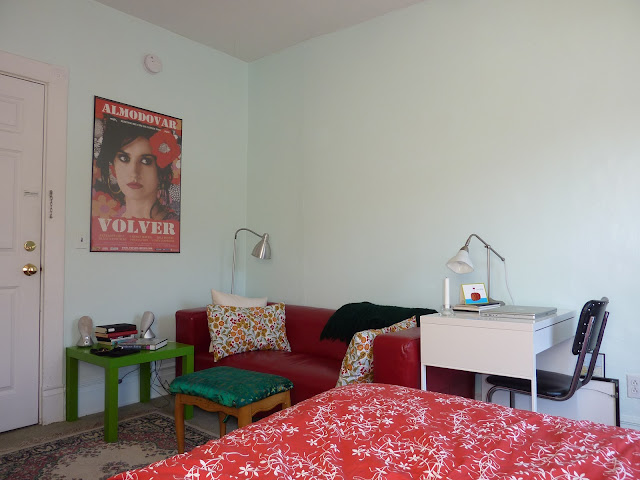 Here are the gaps I'm talking about. I've got a map for over the desk, one framed poster (Croatian naive art bought in Zagreb!) to go over the couch, but it needs a collage of other frames (to be purchased) with it to fill that massive space—I have nine-foot ceilings! My obliging father painted it for me, and he just brought a paint bucket to stand on, because it was easier than a ladder and worked at home. At home, we have eight-foot ceilings. Thank goodness my landlord keeps a painting ladder in the basement. 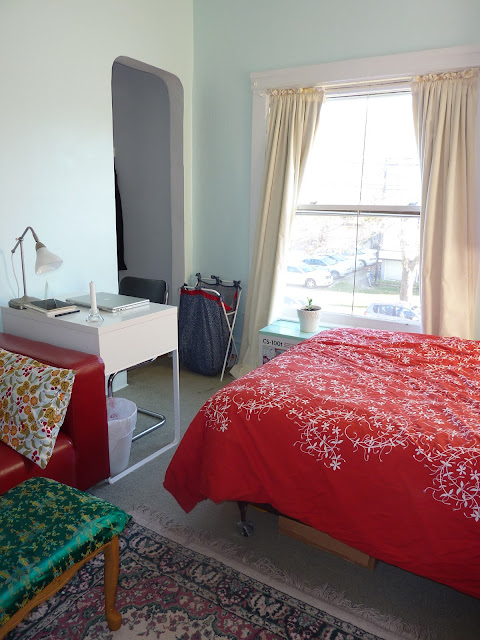 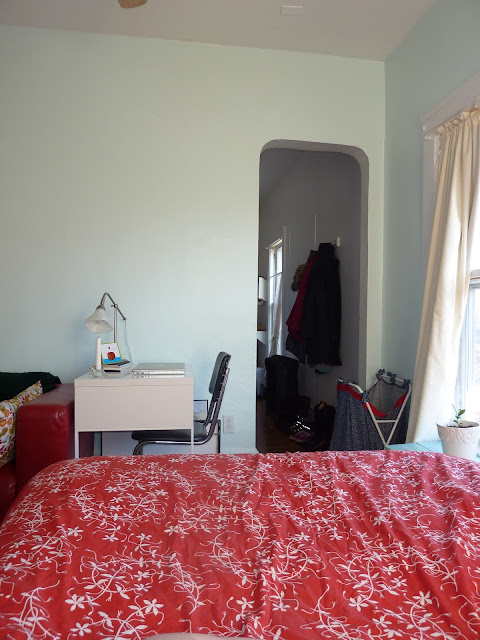 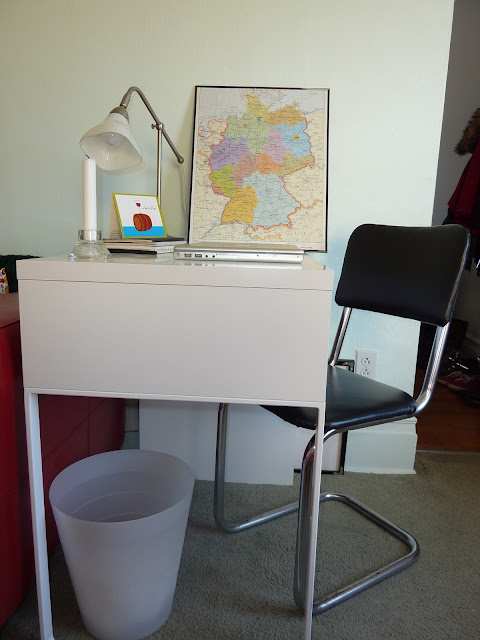 My cantilever chairs are antiques. I'm so cool. My parents bought them in the seventies when they moved into their first apartment together (also in Ann Arbor). My dad says they're from the beginning of the twentieth century. He helped me I helped him reupholster them for Emma and me to use last year. Can't wait 'til Deutschland is on the wall. The pastels of the different Bundesstaaten (states) go great with my "ice cube" walls. They're so pale they don't quite show up right in these photos, but you can take my word that they're lovely. Oh, and that hallway is my breakfast-lunch-dinner nook, which leads to the kitchen and then the bathroom. But those are for another time. 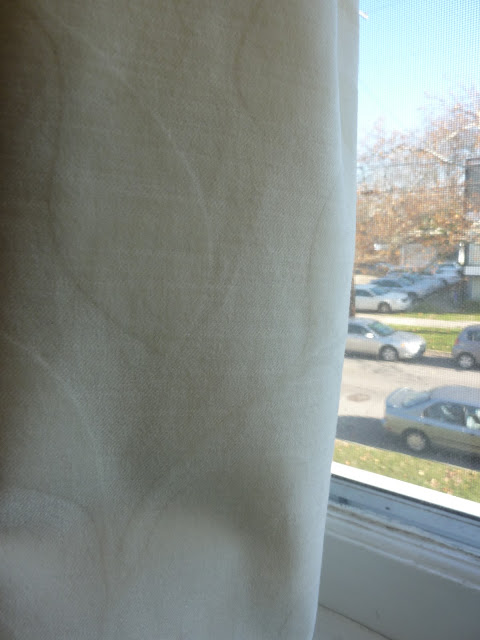 Close-up of my ivory velveteen curtains (which I still have to hem). Funny story—I washed the velveteen for the curtain for the little window over the bed, to pre-shrink it, and when I took it out of the dryer, the raised leaf pattern was gone! Thank goodness I didn't shrink the big curtains. 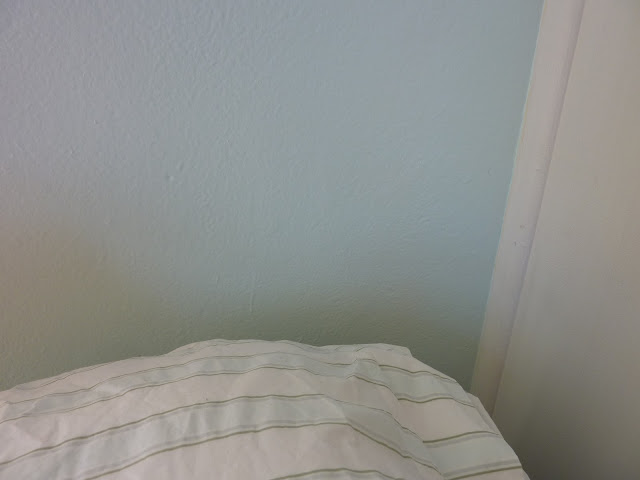 These are my lovely Simply Shabby Chic sheets, which were discontinued before I moved, causing much anguish. But I found them on eBay, and now can happily coordinate with my walls. 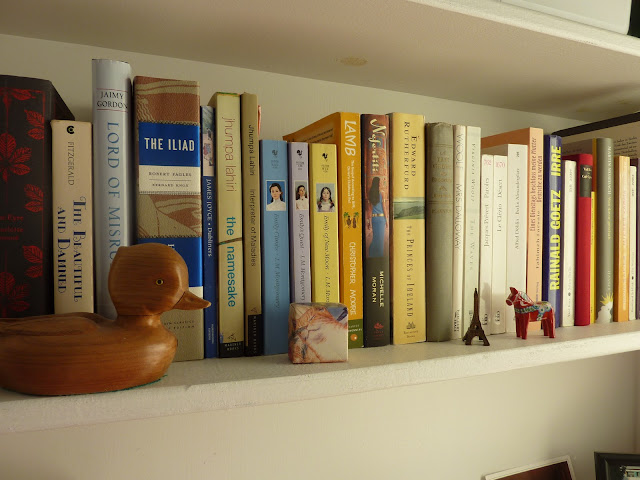 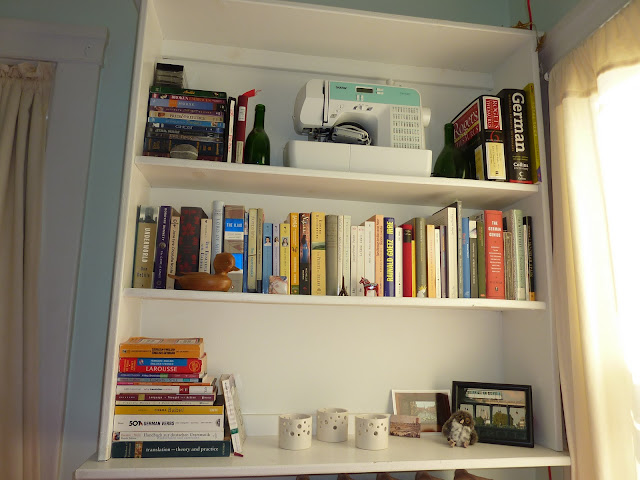 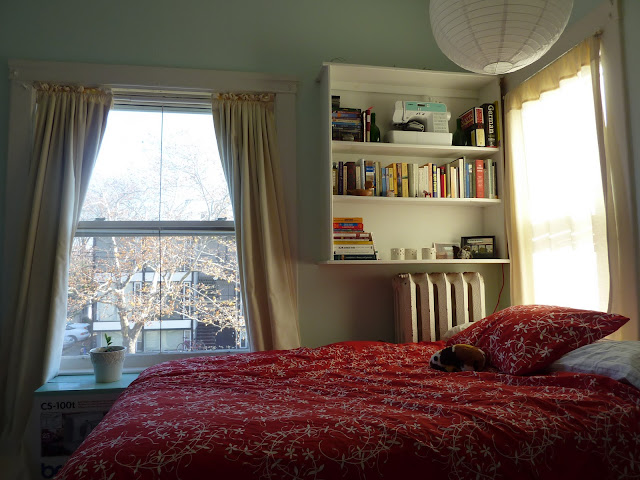 I love your couch.

Drew and I are reading this post projected onto our huge TV. Your apartment looks so gigantic! (It is also beautiful.)

So nice! Hopefully I will be able to visit you and your apartment in January :)

Thanks, guys! I hope all of you can visit me and my apartment ASAP.