Give Me a Home Where the Catamounts Roam

Today, when I got out of work at the law firm, it was snowing. Not the weird pellet-snow that it started with, but actual snow, wet snow, and I had a broccoli to buy and a bike to ride. (You may be noticing this is a theme in my life. I mean the bike and inclement weather.) The only problem with the broccoli is that it is so sad to stop biking and go into a warm, dry place, and then have to leave it to hop back on the bike and get your glasses and pants wet some more before you get to be home. Also the broccoli at the co-op, surprise!, was sort of brown-y and weird on top and also in huge huge stalks that one person cannot eat fast enough when she has two super-long-have-to-eat-at-the-greasy-restaurant days in the next four, so I didn't buy any, and they also had no reasonably-sized potatoes, and then I just had bread and cheese for dinner. With some orange juice, but no pulp, so I will die unhealthy. (That will actually probably be true, when it happens.) So it seems I could have skipped that tragic stop in my tragic ride in the light snow—it wasn't tragic, it was so much better than yesterday's pouring rain.

The point is that I was looking forward to being in my warm home with its overactive radiator and its coat rack newly on the wall (!!) and everything mine mine mine, everything in its proper place, because I tidied up last night or whenever it was. It's such a good feeling to sit down on your bed and take off your coat—okay, normally you probably want to take off your outerwear before you reach the bedroom, but my bedroom is my living room, so not a lot can be done—and put the important pocket-contents (keys, bike light, phone) in their proper places next to the other things in their proper places. 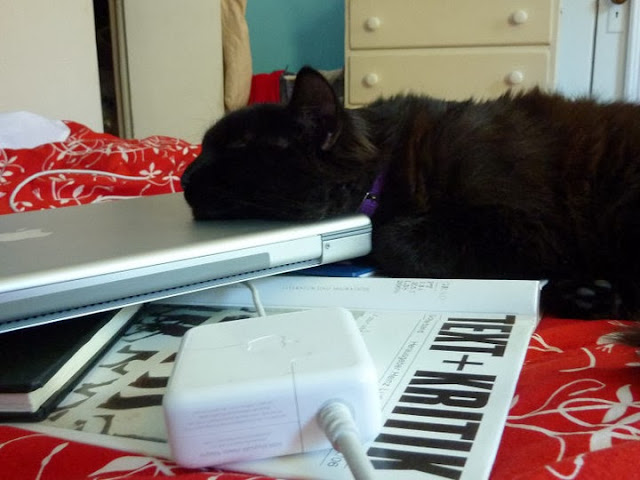 But it's not as good a feeling to look down at the carpet and the computer cord snaking across it and think how a little furry black head would be turning the corner and rubbing up against your legs if you'd just give him the chance. Well. The image is a little off. Haroun would be sleeping on the bed, and probably not get up. Table Cat would have been waiting at the door as soon as he heard feet coming up the stairs, so he would have followed me from my door to my bed. Living in a studio—no, let's call it a 2.5-room apartment—would probably intensify his need to see what's beyond the door—so he might have darted out into the so! exciting! bone-white painted! brown carpeted! weird-smelling! (that's why he'd do it) hallway.

So I imagined my closest kitty friends being in my life today, and you might say it hurt my heart a little if you were cutesier than I, but I've mostly hardened myself to the thought. I've met some kittens a block over, kittens and their little cat mother and sibling from another litter, kittens who live under a porch and need homes for the winter. I know the people in the apartment below me have cats; I've seen them peeking through the gap in the curtains and said silly cat-things to them in my silly, high-pitched cat-voice. I can't help it. I say hi to my kitten not-friends every time I bike past their porch, even if I can't see any of them. Even if I could convince my landlord to let me, though, I can't adopt a cat. 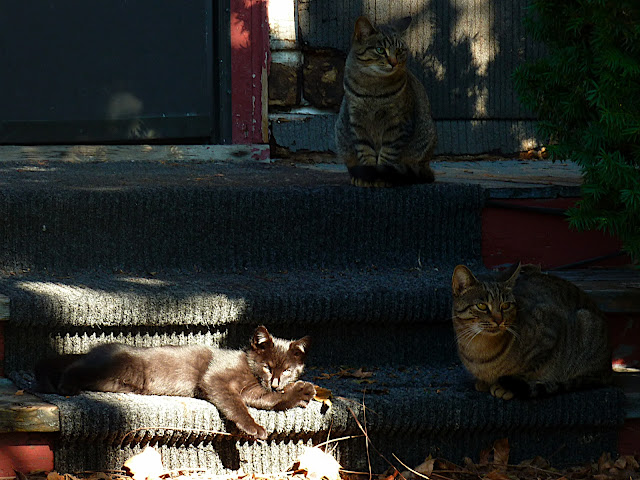 The practical: The apartment is small. A kitten needs space to bounce off the walls. Table Cat would need space to feel like a panther. Haroun might be content to waste away in near-constant indolence, true. But there's also no place to put a litter box, unless I wanted to smell urine and watch Haroun dig for treasure (maybe you don't want to hear about Haroun's issues?) while cooking my meals six inches away.

The crazy: I care too much about the cats I've already lived with. I was torn when I felt my childhood cats falling behind the college cats in my affection, but it was too late. Haroun and Table were my day-to-day life, sometimes the only living bodies in my apartment with me. When I get my next cat, I give up my claim to Emma's cats, whom she really didn't want to let me name (I got Haroun at least), whom she really didn't want me to have. Who aren't mine. But I don't want to let them go.

The considerate: I'm often gone. I work two jobs, and I go to my boyfriend's, which is just far enough across town to make lazy me want to stay put, and I'm only one person. Emma's cats were outraged when I left for the weekend. Heck, I think they were outraged when she left for class while I was at work. I don't have any big future plans right now, but if I did, I wouldn't want to abandon my cats for six months or a year. My parents wouldn't want to take them. Ali's dog would eat them.

But the biggest thing is that they wouldn't understand. You can't tell a cat you're going away for a while, but you'll come back for him. You can't call him up on Skype and have a really good purr-fest together, then catch him up on all the cheeses he hasn't licked while you were in the bathroom. Sane people tell me that cats don't remember. But I know they recognize me. You should have heard Haroun meow at me through the screen when I would go see them in the summer while Emma was in Poland, and they lived across the street from me. If you heard him, you'd swear he was in agony and only I could save him.

And Isabel. My Isa-kitten, who made a mess in my parents' bed the day we got her and was subsequently banished to the bathroom, who I rescued from her mewing solitary sadness and ever since, she slept next to my head, taking up half the width of the bed. Until I went to college, that is, and stopped coming home on weekends and for the summer. When I did come home, she ferociously bit me. Then looked sad, worried, ran away. Came back later, all love and purrs. And bit me again. 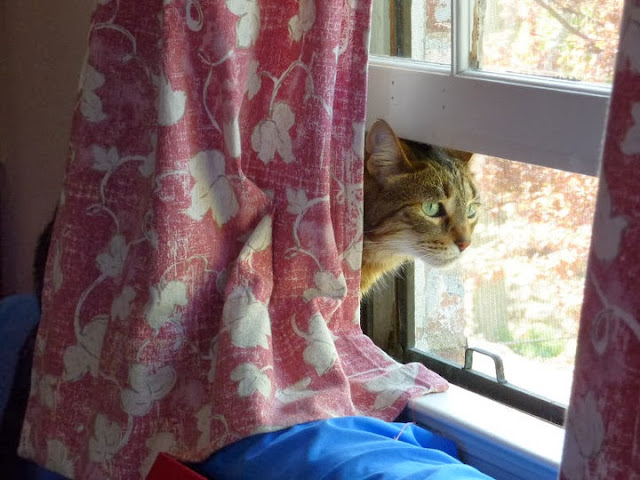 I have suffered through this relationship for years. And I will not have any more of my kittens turn to vengeful little she-cats in their middle age if I can help it.

Animals understand more than we think. Some sense our moods, and act accordingly. Their lives may be mainly in the present, but some of them rejoice when we return to them. And not just the dogs. As soon as I walked in the door—well, until she almost completely gave up on me—Isabel would bound up the stairs to my room and meow for me to open the door so we could hang out together in the sanctuary I'd stolen from her with my absence. Animals care more than we can be sure of, though they obviously understand less than we might like them to. And that's why I think we humans have such a responsibility. I'm not going to adopt and coddle and spoil another kitten with all this crazy affection bubbling up inside me until I know that I can continue to coddle and spoil it all through its life, because that is what it will expect.

Unless Emma trains Haroun to use a toilet. Take away the litter box argument, and all bets are off in terms of my dearly-missed feline flatmates.

P.S. Let's just have an unspoken rule that the label "cats" comes with "crazy" attached, okay?

P.P.S. Anyone know anyone in Ann Arbor who needs a cat sitter or dog walker, not too far from Kerrytown? How about a cat walker?
Posted by Marisa on Thursday, November 10, 2011

Aww you will be the best cat owner