My Favorite Cake to Bake

I first made this cake in the Art of Pastries and Dessert Preparation class I took to fulfill one of my "practical arts" requirements senior year of high school. It's from the Food Network website, and I'm just going to link to the recipe because it's not like I made it up or tweaked it or discovered it on my own. It's one of the best cakes ever because:

1. The caramel. Four tablespoons of butter for half a cup of brown sugar, how do you go wrong?
2. Apples! Autumn!
3. The actual cake is moist and tasty and simple.
4. The actual cake has a little cornmeal in it, which makes it taste better and be more autumny.
5. It's beautiful! 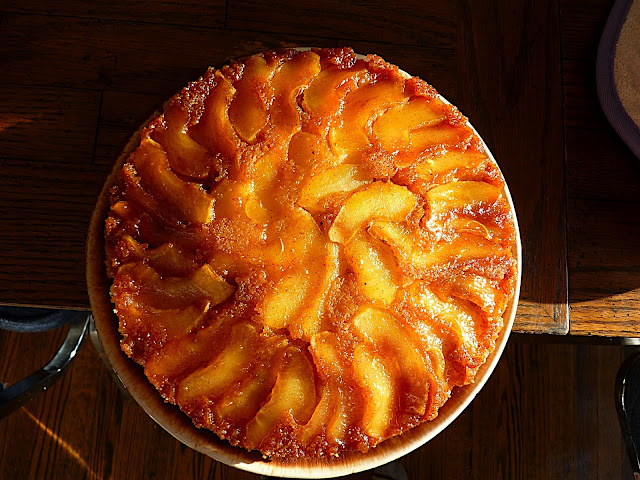 The photos are from last year, but I just don't need to photograph this cake that many more times.
It's not that difficult to make, especially if you remember to let your butter soften and own an electric mixer. But I made it for our big Thanksgiving meal in Germany, where I didn't have a mixer, and both times I've made it this year it was without a mixer, and one of those times I didn't even let the butter get really soft and it was okay. I also made it once or twice in a springform pan, because I was in Germany and that's what they've got. If you disobey the recipe and do that like I did, put a cookie sheet or something underneath to catch the caramel that oozes out. Or maybe I put foil around the bottom of the pan. I don't remember any great disaster, not like the first five times I made chocolate ganache cake and kept filling the pan up to the brim because I was using the size pan it told me to, so why did it always run over and burn on the base of the oven? (So much yelling by my father.) 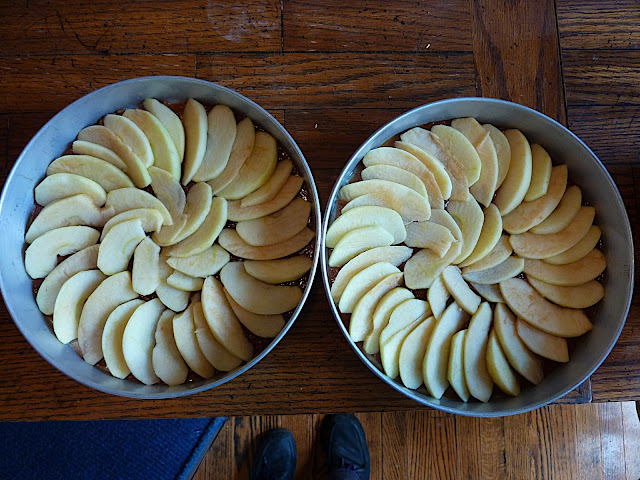 I guess peeling and slicing 2-3 small apples might be a pain for someone who doesn't peel every apple before they eat it because they didn't like skin as a kid and their parents indulged them and then it was too late...but just think how much easier 2-3 apples is than an apple pie's worth! The recipe tells you to scatter the apples in the caramel and then pour the batter on top. I think "scatter" is the wrong word. By scatter, I'm pretty sure they mean "arrange the apple slices in near-perfect concentric rings." But, you know. Whatever you want. It will taste delicious.
Posted by Marisa on Friday, November 04, 2011

Did you make it yet? Did you use up the million apples?

Ahahaha not even CLOSE. And nope, haven't gotten to it yet. Last weekend I was on a pumpkin kick. Maybe this weekend?!

You have a typo of "too" statt "to". It told you to use a certain size pan. SO true about the apples, especially since these are sliced thicker than those I sliced for pies before the Great Microwave Revelation. Mother forced that anal-ness upon us, but not eating of skins. Though I do (you weirdo).