After two trips to World Market this weekend, I can now safely announce that I have a rug for my side of the bed. The first one I picked was a beautiful indigo rag rug with touches of purple and a couple shots of red, and I love it deeply, forever, but it made the side of the bed into a sort of black hole and that could not be borne. So I exchanged it for an aqua-colored one, less perfect as a standalone object but much better suited to its new surroundings. The following picture does nothing justice: the angle is bad, the lighting is bad (although better than usual thanks to my stealing the living room lamp for this purpose...we really need to get another lamp!), there is crap on the bed and the doorknob, and the cat is also better-looking than suggested. 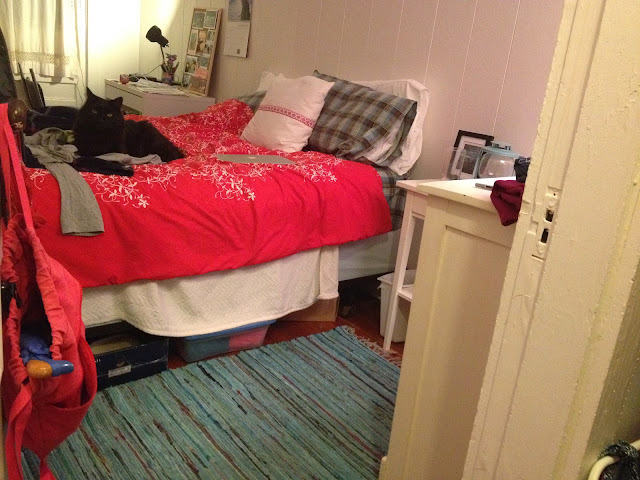 I have a new picture frame, currently living on my nightstand. It is my pride and joy of the weekend. I've had the postcard since Janet and David took me to the Kandinsky exhibit at the Lenbachhaus in Munich over Christmas break. In 2008. Reitendes Paar (Riding Couple) is a squareish painting, but my postcard is 4x6, so that's a weird situation. On Friday, though, I finally tried to get a frame for it, and found one that works really well (although it crops out some of the sides). Behold: 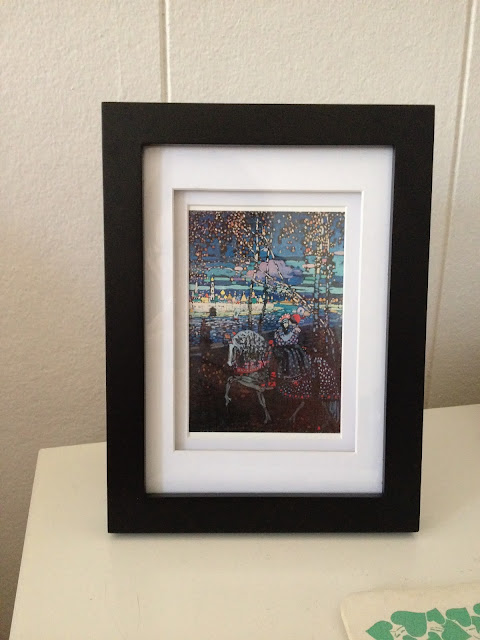 I also picked up some red-tag fabric from JoAnn's tonight so that I can change the upholstery on Ali's old vanity stool that Emma re-covered and I then appropriated. We sacrificed the vanity long ago, but the stool has persisted as a footrest. Emma's fabric had turned an entirely new color, so now, voilà! 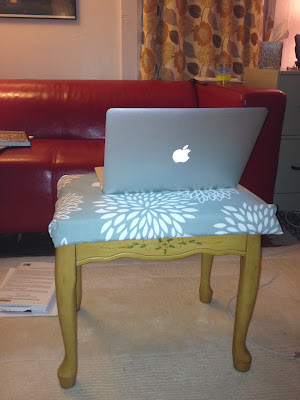 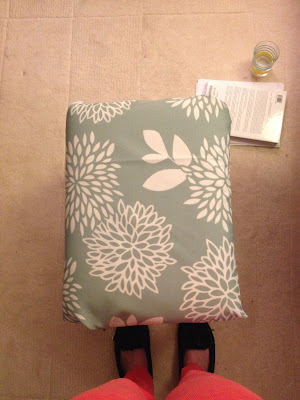 Cooper had been seated at that laptop, but he fled when he realized photography was afoot. The color's a greyish light blue-green. It was six dollars. Now I just have to attach the fabric—maybe I'll borrow my dad's staplegun at Thanksgiving. I also kind of want to paint over the wood, but white's the only idea I've got, and I'm not that into it.

So that was the rest of my weekend. Plus a lot of cat-loving today. I think they really appreciate it when we're home all day, which rarely happens.

you could try a pinkish-red for the footstool (though it may not match the couch) or my personal favorite, a dark charcoal grey!

I'm trying to resist adding toooo much grey (I love it) but I think that's a good call for the stool! I also thought about pinky-red for the fabric for the stool, but decided to do something a little more subtle. We've got a lot of reds going on.

I haven't become a person who paints furniture yet, but...soon!

Paint it the color of your pants!