Welcome to My Bathroom 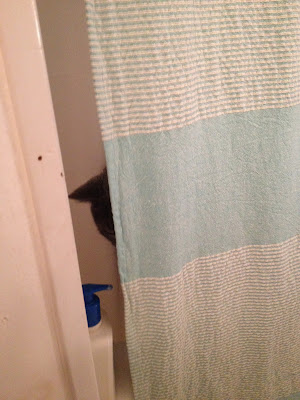 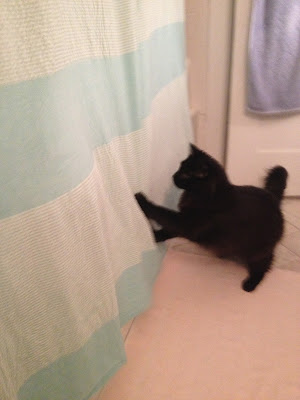 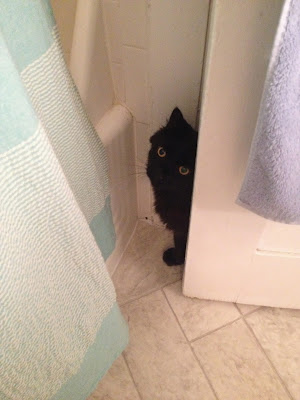 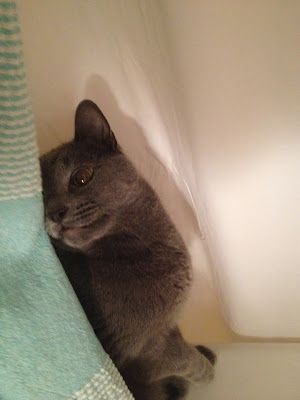 Table Cat's favorite game is Shower-Attack. He'll even do it when you're in the shower. 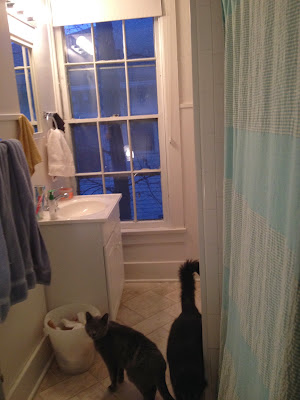 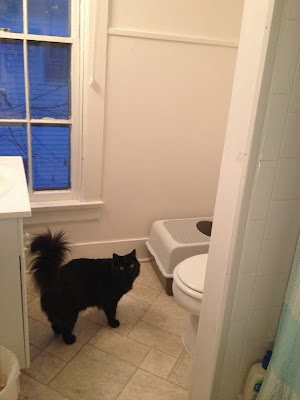 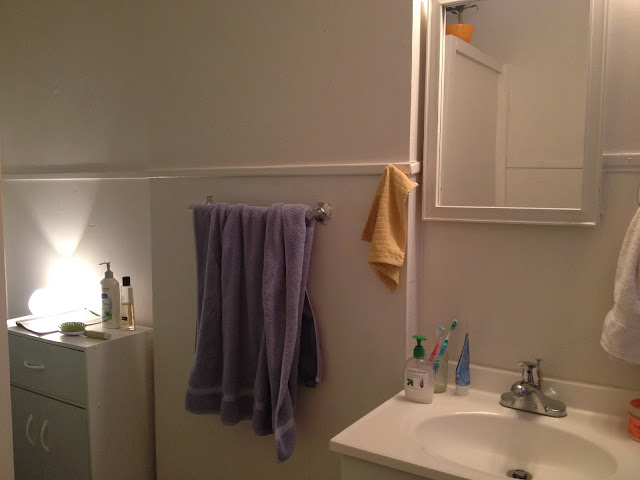 It's pretty decent, right? Especially by dim light at night, but also by day with the sun coming through the yellow leaves on the trees. (I pulled down the blind for the night right after I took these photos, don't worry.) But the bathroom needs some decoration other than the shower curtain (although it's doing a great job). (Maybe this or this—I love her stuff.) 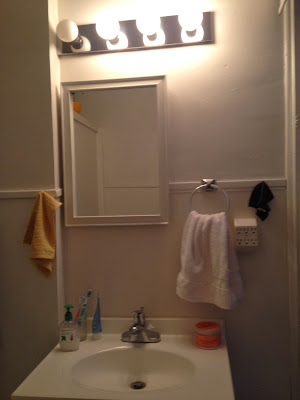 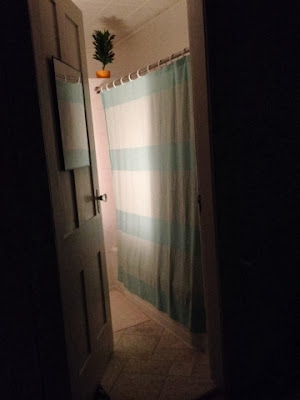 Cooper and I decided we needed a serious portrait, a painting, to hang in the spot next to the mirror. Someone, you know, worthy of sharing a wall with Cooper's visage. Something serious, because it would be funny to hang in the bathroom. He suggested Margaret Thatcher, which lead to Jane's cat, Maggie, who Cooper wanted to name Gertie (Gertrude Stein), which then lead Jane to suggest an artist who does portraits of cats from photos. How about Haroun and Table, as ship captains, facing their own litter box and the human toilet? I didn't know what to suggest, exactly, but I brought up Cooper's taco-cart fantasy, even though I've already done it and I'm not into bringing majestic Table Cat into that universe. Anyway. That's one idea we have.

I also want to buy a clock. Specifically, the middle one, from Ikea. I think it's so shiny and retro in such a good way. But obviously, that sort of clock doesn't go in a living room. We already have the microwave clock in the kitchen. And it's not appropriate for the bedroom, either, though I was thinking about getting a real alarm clock (one option is on the left) so that I could put a bedroom-phone-ban into place.

So I suggested we hang the Ikea Pugg clock in our bathroom—probably pretty high up on the wall above the cabinet. That way I could keep track of the time as I'm getting ready in the morning, and add something else to the room without buying more art (not that I've bought any art yet, sshh). But Cooper thinks it's weird. I'm not sure that it's normal, but my family had a wall clock in the bathroom when I was growing up. We still do. It's nice to know what time it is.

Another option is something small that would sit on that bathroom cabinet opposite the little Knubbig lamp, like the silly clock on the right. I think that would look okay. But I'd rather it not be so roman-numeraled and scroll-y, maybe. I don't know.

What do you think about (wall) clocks in bathrooms? Is this even remotely a thing that people think about?
Posted by Marisa on Tuesday, November 12, 2013

I think the bigger (middle) clock would be a better choice, because if you get the tiny green one, you wouldn't be able to see it easily from the shower, etc.

Although, it is a cool clock.

What if I hung the CLOCK where the cat portrait is supposed to go (next to the medicine cabinet)? IN YOUR FACE, DAWDLING SELF.

THAT would probably make the day more stressful. Or more focused.