I didn't remember NaBloPoMo existed until around 8pm tonight, at which point I was at work, and it had started snowing for the second time today. More serious snow. It took Cooper half an hour to get from North Campus to Main Street to pick me up, and when we got home we found a car stranded on a patch of ice right in front of our building. More cars have hit that same patch of ice since then. Some guys were pushing cars up the hill for a while. It's sort of ridiculous.

My priorities right now are the bowl of popcorn I just made and watching TV cuddled up on the couch, but I burned the popcorn and Cooper can't stop watching the cars get stuck on ice. He called the police, and says the whole right side of the street might be ice. It sounds like spaceships out there when the wheels spin and don't go. 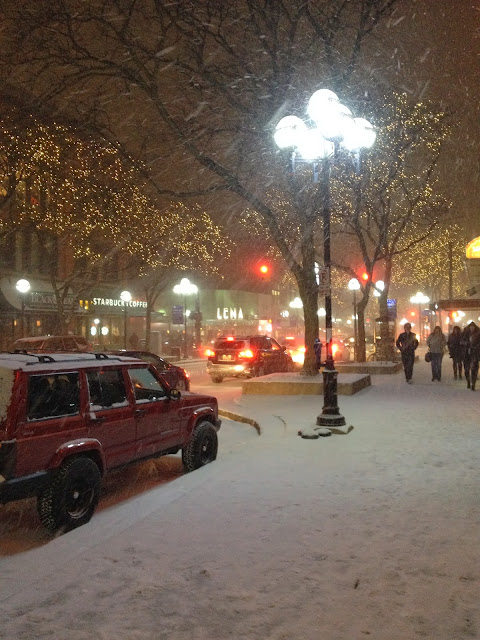 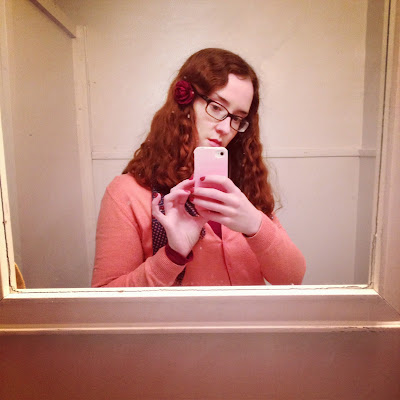 My hair was well-behaved tonight.
Posted by Marisa on Saturday, November 23, 2013

Your hair looks awesome. I completely forgot what snow looks like, and I miss Ann Arbor. Although I don't really miss snow so much as I miss the nostalgic idea of snow.

Some of my coworkers at Jolly were really excited about the snow and I was just like, EHHHH I'm glad I'm not walking home in it. But today felt like Christmas break, like a real vacation day, in part because the leaves are all gone from the trees and the ground was white outside -- which was surprisingly apparent even without standing and looking out the window. And then, also, it was my first day off with no social obligations in................?????

So it was amazing, and I thank the snow for helping with that. Also, watching it fall outside from inside is pretty great.